1. As in other advanced economies, income inequality has been increasing in Japan (Figure 1). Following extremely high income concentration in Japan pre-World War Two (WWII), concentration declined abruptly during WWII and remained very low for the rest of the twentieth century (Moriguchi and Saez, 2008).2 Over the last few decades, technological progress and globalization have been identified as drivers of income inequality increases in advanced countries (IMF, 2017). For example, technological change has contributed to the skill premium, with a more educated population having a comparative advantage on new technology adoption. In the case of Japan, aging and demographic factors, plus the rise of non-regular work, have been identified as contributors to this trend (Cabinet Office, 2006; Jones, 2007). Shirahase (2013) also emphasizes the rise in female labor force participation vis-à-vis significant gender inequality in Japan’s labor market.

3. The remainder of the chapter covers generational, gender, and regional aspects of inequality in Japan. Section E summarizes the key findings and includes a policy discussion. The appendix highlights important differences and limitations from available national surveys that cover inequality.

B. Inequality and Generations

4, Income inequality is higher for older generations, and it is expected to further increase as the share of the elderly continues to rise. Data for different cohorts show that income inequality is higher among the elderly than among the working-age population, even though fiscal redistribution significantly reduces the difference (i.e. note the 50 percent reduction from the Gini market income to the Gini disposable income for the elderly, in Figure 3). A similar pattern is observed among cohorts “30 years old and under,” “30–49 years old,” and “50–64 years old,” with higher income inequality for older cohorts.

6. Older generations, who benefit most from fiscal redistribution (via taxes and transfers), are significantly wealthier than younger generations. Wealth poverty is significantly lower for older generations (Figure 5, left panel). Moreover, the wealth ratio of older versus younger cohorts is relatively high in Japan when compared with Germany and Italy, though lower than in the U.S. (Figure 5, right panel).4 Therefore, the evidence points to significant wealth inequality across generations—with wealthier older cohorts and less wealthy younger cohorts.5 The highlighted relative wealth of older generations in Japan calls into question the costly fiscal redistribution mechanism in place that reduces elderly income inequality mainly via pensions (see Figure 3).

7. Women’s economic participation in Japanese labor markets has increased, though much of the increase represents non-regular and part-time work, which has contributed to higher inequality. Female labor force participation (FLFP) shows a significant uptick in recent years, with more women joining and remaining engaged in the labor force (Figure 6). However, many of the jobs that women have are non-regular or part-time jobs that receive lower wages, training and career opportunities, which increases inequality (Miake, 2017; Shirahase, 2013). Along similar lines, Yokoyama and Kodama (2018) find that the decrease in earnings of middle-class female workers (between 1989 and 2013) is mainly due to the increase in part-time workers.

8. Women are underrepresented in Japanese managerial and policy-making positions.6 There has been some improvement in female representation in managerial roles within public and private sectors, but outcomes are still below the government’s 2020 targets (Figure 7). Similarly, the share of female board members in listed companies has increased (from 1.6 percent in 2012 to 3.7 percent in 2017), but it remains well below the 10 percent target set for 2020. Regarding female representation among policy makers, Japan ranks low with only 10 percent of lower chamber representatives being women—the lowest share among the G7 countries and 70 percent below the OECD average (Figure 7).

9. Inequality by gender is significant in Japan but there has been a decline in the gender (hourly) wage differential over time. Japan’s gender wage gap (of 25 percent) is 75 percent higher than the OECD average. Japan’s male-female hourly wage ratio was 134 percent in 2015 and varies by prefecture, with many of the western prefectures showing the lowest hourly wage differentials (Figure 8).7 Improvements in the status of women within Japan’s labor market is evidenced by the 8 percent decrease in the gender hourly wage differential between 2005 and 2015. Similarly, Lise et al (2014) find a decrease in (hourly) wage inequality for women between 1991 and 2008; but, due to a sharp increase in “hours inequality” for women, they document an increase in earnings inequality for women.

12. Income inequality has been increasing rapidly in Japan, driven by demographic forces and increases in non-regular work and female labor force participation. Several factors are associated with higher inequality in Japan:

15. Intergenerational, gender-based, and regional considerations are essential for a well-balanced comprehensive and inclusive macroeconomic policy package. Independently of the chosen balance among sometimes competing policy objectives (i.e. growth and fiscal consolidation), a comprehensive policy package that takes all trade-offs and synergies into account is key, incorporating critical intergenerational, regional and gender-based considerations.

Prepared by Mariana Colacelli and Anh Le (both APD).

Relatedly, Chen et.al. (2018) document increasing intergenerational inequality in the European Union since the Global Financial Crisis, with a growing poverty risk for the young and declining risk for the elderly. 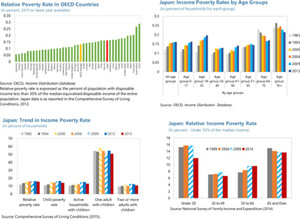 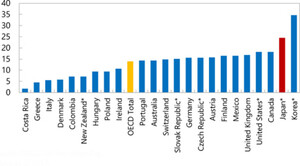