Japan’s demographics, combined with its generous social security system for health and retirement, are set to substantially increase age-related costs. Simulation results from a carefully calibrated general equilibrium overlapping generations model suggest the consumption tax rate would need to be increased gradually to around 15 percent by 2030 and further to 20 percent by 2050 to finance the costs of aging. Consumption taxes are also found to be the least distortive way—in terms of effects on growth and welfare—to finance aging costs. The model results also underscore that the cost of postponing the financing adjustment is substantial, benefiting the current elderly to the detriment of all future generations. The gradual consumption tax rate increases should be complemented by broader reforms—improving efficiency of healthcare services, raising the fertility rate, and achieving faster productivity growth.

1. Japan’s demographic headwinds have and will put additional pressures on fiscal sustainability. Japan’s population started declining around 2009, and is expected to fall by 25 percent over the next 40 years. In addition, the old age dependency ratio (the population aged 65 years and older as a share of the population aged 15–64 years) is expected to increase from 44 percent in 2016 to 75 percent by 2060, putting downward pressure on GDP and per capita GDP. These demographic trends, combined with Japan’s generous social security system, pose substantial challenges to the financing of its already large fiscal imbalances. The Japanese government has already implemented some important reforms—most notably a macro-indexing mechanism in the pension system with the aim of controlling the aggregate pension spending as a percent of GDP (introduced in 2004 followed by subsequent reforms). However, more needs to be done. In particular, the social security system in Japan includes universal health care and a generous long-term care system. Per adult spending on health and long-term care increases exponentially with aging. In addition, health and long-term care costs per adult, conditional on age, have increased at a faster rate than GDP per person over the last decade. The aging and shrinking Japanese population are expected to have a significant impact on the country’s macro-fiscal outlook.

2. Against this backdrop, this chapter aims to quantitatively assess the macroeconomic and distributional implications of different options for financing the cost of aging. The interlinkages between alternative fiscal paths and demographics are complex and require a general equilibrium framework to be properly assessed and quantified. Attention is paid to financing’s distortive impact on growth, intergenerational equity, and the cost of delaying sufficient adjustment.

B. Framework of Analysis

3. The analysis is based on a general equilibrium overlapping generations model developed for the quantitative analysis of aging costs and fiscal policy.2 This model has a rich set of fiscal policy instruments. Households vary by generation and skill level, and face different levels of taxation and transfers. On the spending side, households receive age-dependent transfers—pension benefits as well as health and long-term care. On the other hand, financing instruments include time-varying progressive labor income taxation (including social security contributions), consumption tax, corporate income tax, and government debt. These instruments and related parameters are tailored to Japan’s data at the macro and micro level. In addition, the model’s assumed demographic transition closely follows the authorities’ projections to capture the dynamics of age-related cost.

4. Four scenarios for financing the cost of aging are considered. First, the fiscal adjustment need is quantified in terms of the consumption tax rate, with a view to finance the costs of aging while stabilizing government debt at its current level. Three alternative scenarios are then considered—financing through social security contributions; financing through government debt (the debt is only stabilized after 2040); and financing through increases in health and long-term care copayments. In all cases, consumption taxes adjust to make the government budget constraint hold (given other taxes and the debt path). The rich demographic and fiscal structure of the model allows us to quantify not only growth implications but also welfare implications (computed as the discounted life-time utility for each given type and generation of each household—current and future generations included).

6. Higher social security contributions result in larger losses in GDP and welfare. Under the current health and long-term care system, about half of total spending is financed through social security contributions, which will be adjusted across all income brackets. These taxes ultimately reflect higher effective taxation on labor income. In order to analyze the implications of increases in social security contributions, it is assumed that the rate of labor income tax is gradually increased by 8 percentage points over 20 years to finance the expected increases in health spending (see Figure 1). Compared to the “preferred policy scenario” (i.e., financing aging costs through consumption tax rate increases), the required increases in the consumption tax rate are substantially smaller (peaking at 16 percent for VAT(SSC) in Figure 1). However, as labor income taxes are more distortive than consumption taxes, the losses in GDP are larger (see GDP(SSC) in Figure 1). In addition, in terms of welfare, retirees and older workers gain since they care mostly about consumption, while young workers and all future generation suffer very large losses. Because labor income taxes are progressive, partly financing the costs of aging through this way has more negative effects on individuals with higher productivity. The overall welfare losses of this policy— relative to the preferred policy—are very large, due to the highly distortive nature of labor income taxes (in the model “being born” means arriving immediately at working age, hence, the Birth-Year Cohort equal to 0 in the text chart represents an individual that just entered the workforce).

7. The macroeconomic costs of delaying the financing adjustment include substantial crowding out of private sector investment, even higher consumption taxes, and large GDP losses. To analyze the costs of delaying adjustment, continuous deficit financing (and debt accumulation) is assumed to finance the age-related costs and debt is only stabilized after 2040 (the resulting debt-to-GDP ratio is higher by about 100 percent of GDP, see Figure 1). The interest rate on government debt is assumed to be held domestically and remain unchanged in real terms.4 In equilibrium, this policy causes large crowding out of private sector investment. The reason is that households must be compelled to save enough to hold a much larger stock of government debt, and this can only happen by increasing the cost of capital for the private sector. Stabilizing debt under this scenario requires even higher future consumption tax rates to finance the government budget, peaking at about 30 percent (see VAT(Debt) in Figure 1). Because of the crowding out effect, GDP is 15 percent lower relative to the preferred policy within 20 years (see GDP(Debt) in Figure 1).

8. Postponing adjustment translates into large welfare losses for most individuals. Relative to the preferred policy scenario, all future generations and current workers lose substantially in the debt financing scenario. The reason is twofold: first, crowding out of private investment reduces private capital and thus business profitability (and wages); second, households know they will face higher consumption tax rates than in the preferred policy scenario. Retirees could thereby benefit from lower consumption taxes. However, lower aggregate growth due to the crowding out effect outweighs the potential benefits for the most elderly. These results highlight that the remaining scope for near-term fiscal support is limited, and the authorities should therefore accelerate much needed structural reforms.

9. A uniform increase in health and long-term care copayment rates for the elderly could help mitigate tax increases for future generations, but at the risk of regressive consequences. If the copayment rates for the elderly (aged 65 years and older) are increased to the average level paid by the working age (between 20 and 64 years old), the required increases in consumption tax rates will decline by about 3 percentage points. However, the relatively large welfare losses for lower income households highlight the importance of due consideration in safe-guards for low-income households in the presence of this kind of reform.

10. Improving the efficiency of the healthcare system could deliver meaningful fiscal savings. Measures to contain health and long-term care spending should balance the objectives of delivering fiscal consolidation and preserving public welfare—focusing primarily on improving efficiency. For example, reducing per capita spending by 10 percent through improving efficiency would decrease the required increase in the consumption tax rate by more than 2 percentage points over the long-run. Importantly, this analysis also highlights the difficulty of predicting the required consumption tax rate without anchoring social security spending as a percent of GDP. Therefore, specific policy measures to curb health and long-term care outlays are important as they will help reduce policy uncertainty on the path of future consumption tax rates.

11. Higher fertility rate and TFP growth can also complement fiscal reforms. Reforms that raise the fertility rate can improve long-term growth and fiscal prospects, by delivering a substantial increase in aggregate GDP and lowering the required consumption tax rate by 3 percentage points over the long-run. Comparable savings can be attained through reforms that improve overall productivity growth if government outlays are contained.5 These results highlight the importance of a comprehensive policy package, which includes both a government financing plan that minimizes distortions on the economy as well as broader structural reforms.

12. Japan’s demographics and generous welfare system require spending controls and a gradual and credible fiscal adjustment to finance the costs of aging. Within the scenarios considered here, financing the costs of aging through consumption taxes has the least negative effect on GDP and welfare. The required increases should be gradual, reaching a rate of around 15 percent by 2030 and 20 percent by 2050. If instead higher social security contributions are used to finance the costs of aging, labor income tax rates would have to go up by about 8 percentage points over the sample period. Relative to the preferred policy (financing through consumption tax rate increases), the model predicts a 7 percent permanent lowering of GDP by financing through higher social security contributions. Containing the costs of aging is a priority, as it will help reduce uncertainty on future tax burden.

13. The cost of postponing adjustment is substantial—benefiting current retirees and adversely affecting current workers and all future generations. Postponing the financing adjustment (and thus accumulating debt) increases the debt burden to three times GDP, has important negative crowding out effects on private investment, and would also result in permanent GDP losses of about 15 percent according to the model (relative to the preferred policy). A key result is that higher debt allows consumption taxes to remain lower than in the preferred policy scenario. However, this would also crowd out private investment, substantially hurt the incomes of current young workers (who need to accumulate assets), and result in even higher tax rates to finance the government budget. Financing aging costs through higher social security contributions is also highly distortive to growth and welfare.

14. A credible fiscal framework should be implemented. Such a framework would be mindful of the costs of aging; the implications of different ways of financing; and the cost of delaying reform. Given that the adjustment needs depend heavily on the trajectory of health and long-term care, well-specified measures for containing the growth of health and long-term care costs (in percent of GDP) should be an essential part of such a fiscal framework. This cost containment should be accompanied by a gradual path of consumption tax rate increases beyond 10 percent. The substantial cost of postponing fiscal adjustment underscores that the fiscal framework needs to be implemented as soon as possible.

For further details on the model tailored to Japan, see McGrattan, Miyachi and Peralta-Alva (2018).

The required consumption tax rate implied by this analysis stands at the lower end of the range obtained by alternative researches—see Braun and Joines (2015), Imrohoroglu and Sudo (2011), and Imrohoroglu, Kitao and Yamada(2016).

Higher GDP growth does not automatically lower government outlays as a percent of GDP. In particular, some expenditures are explicitly linked to growth and wages (e.g., pension benefits).

Investment to GDP (In percent) 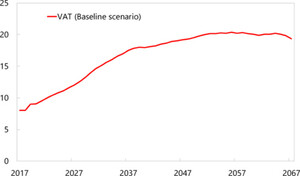 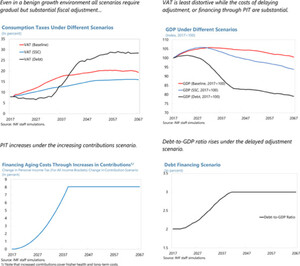 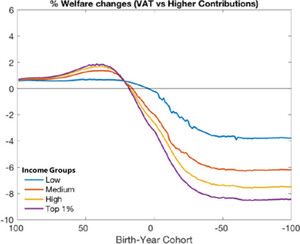 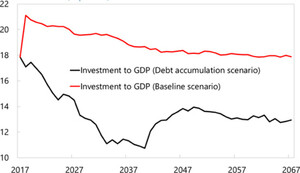 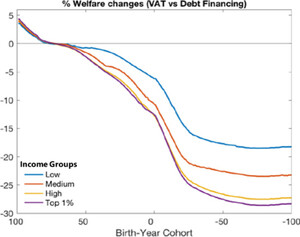 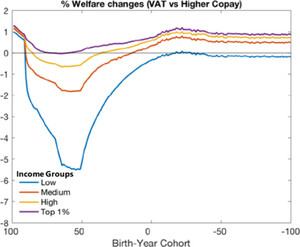