1. This supplement updates the Staff Report (SM/18/249) based on additional information that has become available since it was circulated to the Executive Board on October 26, 2018. The thrust of the staff appraisal remains unchanged.

2. New data indicate that nominal GDP and fiscal revenues will be higher than projected in the staff report starting in 2018.

3. As expected, the Autumn budget raised the health spending path substantially over the next five years, but left the headline fiscal deficit path unchanged. The Office of Budget Responsibility judged this year’s revenue strength to be permanent in nature. Higher levels of employment, measures to reduce tax avoidance, and higher retained earnings by corporations in the context of reduced investment could explain the overperformance, although it is also possible that the underlying nominal GDP is higher than currently estimated by the Office of National Statistics. The stronger revenue outlook allowed the government to increase expenditure without major offsetting measures, while maintaining an unchanged deficit path. As anticipated in the staff report, the government committed in the budget to increase funding for the National Health Service over five years starting in FY2019 (the overall increase amounts to about 1 percent of GDP by FY2023).2

4. There is a risk that the observed improvement in the tax-to-GDP ratio is not fully structural in nature. A full assessment of the nature of the revenue strength will require further analysis. Should the strength in receipts turn out to be temporary, or if downside risks to the outlook related to Brexit negotiations materialize, the announced increase in public health spending would require new revenue sources and/or offsetting spending cuts elsewhere in the budget. Otherwise, it would be difficult to meet the fiscal framework’s goal of balancing the budget by mid-2020s. In addition, the margin against the 2 percent of GDP cyclically adjusted overall balance target for FY2020 would be significantly reduced, limiting the room for policy responses to shocks.

5. Increased public spending would provide a boost to real GDP growth in 2019, adding to domestic price pressures. Growth in 2019 would be higher by ¼ percentage points compared to staff’s original projection (at about 1.7 percent), driven by the increase in fiscal spending.3 Both our and the authorities’ projections remain conditional on a smooth Brexit based on a broad free-trade agreement, and are therefore subject to considerable uncertainty. The upward revision implies that a small positive output gap would open next year, raising pressure on domestic prices, which strengthens the case for further monetary policy tightening. Given the greater-than-usual uncertainty about the economic outlook, the increases should still be limited and gradual.

6. The recently released European Banking Authority stress test results suggest that the major UK banks would be resilient under sizable shocks. The country-specific macroeconomic scenario for the UK was the most severe among larger countries.4 Two large UK banks were among the most affected in the adverse scenario, but Common Equity Tier 1 capital ratios remained above 6 percent for all participating UK banks. The 2017 Bank of England stress test considered a very similar adverse scenario although, unlike the EBA stress test, it also incorporated likely mitigating actions by banks.

7. The European Commission (EC) has recently indicated that cliff-edge risks for EU access to UK CCPs can be mitigated by granting UK CCPs temporary recognition. The EC Vice-President Dombrovski has publicly stated that EU financial companies will be able to continue using UK derivatives clearing services in the event of a “no deal” for limited duration and subject to equivalence standards, although further details have not been specified.

In addition, several spending categories have been lower than expected, including debt interest spending (in line with lower RPI inflation) and welfare spending.

Other budget measures added up to a net giveaway of about ⅓ percent of GDP (£6bn) in 2019, which will diminish and ultimately reverse over time to become a small net takeaway by FY2023. The measures included minor tax cuts (a rise in the income tax personal allowance and a one-year freeze in fuel duty), a small increase in non-health related spending (including an additional £0.5bn for Brexit preparations), and more generous payments under the Universal Credit scheme (a flagship social assistance program designed to roll multiple separate programs into a single entity). These will be partially offset by some tax increases (including a new tax on large digital service providers).

The largest year-on-year increase in public spending relative to the previous path is in FY2019, resulting in a fiscal stimulus in that year.

The adverse scenario for the UK assumed 3.3 percent reduction in GDP, 4.5 percentage point increase in unemployment, and close to 30 percent decline in residential and commercial real estate prices. 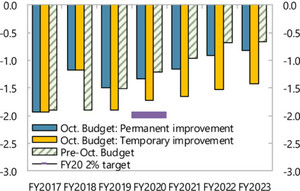