A. Income Inequality in Mexico

1. Mexico has a high level of income inequality compared to other OECD countries. The Gini coefficient2 in Mexico far exceeds the OECD average and is just equal to the Latin American average. Similarly, the ratio of average income of the top 20 percent to the average income of the bottom 20 percent of the income distribution is twice as high in Mexico than in other OECD countries (Figure 1).

2. Inequality has only slightly declined over the last decade. In contrast, the average Gini coefficient in Latin American countries has fallen substantially (Figure 2). The commodity price boom, which increased demand for low skilled labor, played a significant role in that fall (IMF, 2018). However, that boom did not affect Mexico much, as its economy is more diversified and as it exports mostly manufacturing products. Still, the average annual growth of household income over the period 2004–16 decreased nearly monotonically across income deciles.

4. Labor income remains the main source of income inequality. The Gini coefficient based on labor income only (wages and self-employment income) was close to 0.54 in 2016. Capital income tends to compound labor income inequalities, which on the contrary, public and private transfers contribute to reduce.5 A Shapley decomposition of the change in the Gini coefficient between 2004 and 2016 shows that labor income contributed to a small increase in inequality over the period, which was more than offset by government transfers. This attests to the significant redistributive role of public transfers in Mexico, although that role remains much smaller than in peer countries.

B. The Role of Government Transfers

5. Transfers and taxes play a much more limited role in alleviating inequalities in Mexico than in other OECD countries. The Gini reduction effect of transfers and taxes is lower in Mexico than in all OECD countries. This limited redistributive role of fiscal policies in Mexico may result from a tax system that is insufficiently progressive. It also reflects the low level of public social spending as a share of GDP, in particular on non-contributory cash transfers targeted at the poorest households.

7. Mexico’s social assistance programs cover well households at the bottom of the income distribution. 31 percent of the households in the bottom income quintile benefit from Mexico’s conditional cash transfer program Prospera (formerly known as Oportunidades and initially launched as Progresa), which has served as a model for many countries around the world (Parker and Todd, 2017). Similarly, the share of households benefiting from old-age social assistance is three times higher in the first income quintile than in the fifth one. Prospera and old-age social assistance programs account for about ¾ of the decline in the Gini coefficient coming from government transfers, while they represent about half of the total government transfer amount received by an average household.

8. Other social benefits are less well targeted. Individuals in the bottom income quintile receive less than 30 percent of total social transfers, a smaller share than in other Latin American and OECD countries (Figure 7, top left panel). The farmland subsidies program Proagro (formally Procampo) benefits a greater share of households in the bottom income quintile than in any other quintile, but the average amount received by household in the top quintile is only marginally lower than the average transfer amount to households in the bottom quintile and higher than in the middle three quintiles.

9. Non-monetary government transfers covering medical expenses benefit the same proportion of households in all five income quintiles. However, the transfer amounts increase with income, following the growth of healthcare expenditures with income and resulting in richer households getting a higher share of their health expenditures covered by the government (Figure 7, middle right panel).

11. A comparison of the effect of various government transfer programs on inequality confirms the predominant role played by Prospera and old-age social assistance programs. Those programs account for 74 percent of the reduction in the Gini coefficient achieved by government transfers (Figure 8).

The Theil index is defined as the weighted average of the log of the ratio of individual income to average income:

where n denotes the total number of individuals, yi is the income of individual i, and is the average income in the population.

The decline in returns to education has been attributed to the increase in the supply of skilled labor and the misallocation of resources (Levy and Lopez-Calva, 2016).

Capital income tends to be under-reported in ENIGH and a comparison of ENIGH data with national accounts suggests this under-reporting may have increased over time (del Castillo Negrete Rovira, 2017).

Scott, de la Rosa and Aranda (2017) argue that this decline in social spending after 2015 was compounded by a significant reduction in indirect subsidies, in particular on gasoline. The latter is not addressed in the analysis presented here.

Mexico: Inequality in Mexico and Regional and Income Peers

Mexico: “Between” and “Within” Inequality

Mexico: Gini Coefficient With and Without Government Transfers 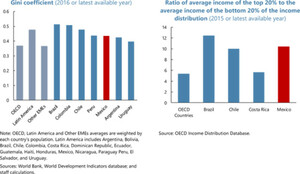 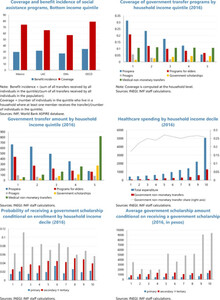 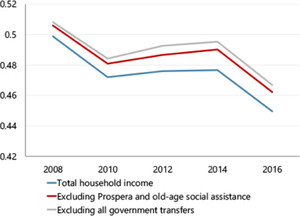