1. Resource-rich economies face unique challenges associated with highly volatile revenues. Commodity prices can fluctuate drastically and shocks can be large and persistent. Since resource-rich countries tend to rely heavily on commodity revenues to fund their budgets, price fluctuations can lead to procyclical movements in government spending, resulting in booms and busts. This volatility in expenditures can result in a destabilizing fiscal policy and undermine economic growth (IMF 2015a; Gelb and associates 1998). Also, high uncertainty related to the valuation of resource wealth and the volatility of key resource revenue make it difficult to assess the appropriate fiscal stance.

2. Resource-rich countries tend to be at a higher risk of having to undertake a large fiscal adjustment. The pace and size of the adjustment will depend on several factors, including the magnitude of the commodity price shock, its impact on the budget, and the availability of buffers. Recent commodity booms were followed by a sharp, but short-lived, fall in commodity prices. Countries managed to smooth the shock thanks to their accumulated buffers, but expenditures were nevertheless significantly cut in many cases (Angola, Republic of Congo, Ecuador, Kuwait, Kazakhstan, Iran, Saudi Arabia, and Venezuela) and economic growth decelerated.

3. Adjustments undertaken through fiscal policy action need to be considered within the wider macro-financial context (Box 1). While a flexible exchange rate has been found to mitigate growth losses after a shock for more diversified economies (IMF 2016b, and Baba et al. 2015), preserving a peg can provide a helpful anchor for highly undiversified economies but only if large financial buffers exist and/or credible fiscal adjustments are possible in the face of persistent shocks (IMF 2016c; Husain et al. 2015). It is important that robust monetary policy frameworks and well-developed money and foreign exchange markets are in place to mitigate potential risks, including higher inflation and deteriorating balance sheets. Further, large swings in commodity prices can lead to deterioration in household and corporate balance sheets with negative spillovers into the financial system, potentially affecting fiscal adjustment, in the event of government bailout or intervention in the financial system. Appropriately coordinated macro-financial policies can help mitigate financial sector vulnerabilities and their fiscal consequences.

4. The adjustment is set out in a medium-term fiscal strategy with clear objectives. Fiscal policy should be guided by formal medium-term fiscal objectives. The overarching objectives and policies needed to achieve them are clearly established and well communicated. Social dialogue and broad political support enhance the likelihood of sustained implementation of reforms (IMF 2015b). The strategy would include steps to achieve sustainable fiscal targets (e.g., non-resource primary fiscal balance (Norway, Timor-Leste), structural balance (Chile, Colombia)) and identify sources of financing to smooth the adjustment process. Given that fiscal slippages can come from state-owned enterprises (SOEs), expanding targets to the whole public sector is advisable.

5. Countries with fiscal buffers can focus on a smoother, growth-friendly adjustment process. Even countries with sizable buffers may need to undertake significant (albeit gradual) adjustments as fiscal deficits may become too large to sustain over the medium term. For example, only a few countries (e.g., Norway and UAE) could withstand the 2014–15 fall in oil prices with sufficiently large buffers to shield their budget. Still, sizable buffers allow countries to consolidate at a slower pace, protect priority areas, and focus on reforms of higher quality. The speed of the adjustment should consider the impact on growth (e.g., fiscal multipliers) and the need to converge to a sustainable debt position. Further, the choice between drawing down financial assets and borrowing will depend on the portfolio of assets, its respective returns, the cost of borrowing, and management of risks and trade-offs between the different assets and liabilities.

6. Resource-rich countries with more diversified economies and tax bases are better prepared to weather commodity-related shocks. To the contrary, oil export-dependent economies experienced a massive shift from large budget surpluses, averaging 4½ percent of GDP in 2012, to deficits of 10¼ percent of GDP in 2015. In heavily commodity-dependent economies, large commodity price shocks can also trigger problems in other vulnerable sectors (e.g., the financial system, especially where financial institutions have large exposures to the commodity sector), which may require faster/larger fiscal adjustment to be able to manage contingent financial liabilities.

Resource-rich economies face unique challenges associated with highly volatile revenues. Since these economies tend to rely heavily on commodity revenues to fund their budgets, price fluctuations can lead to procyclical movements in government spending, resulting in booms and busts. Thus, they are at a higher risk of having to undertake large adjustments. The pace and size of the adjustments have been contingent on several factors, including the magnitude of the commodity price shock, its impact on the internal and external imbalances, the availability of buffers, and the macroeconomic policy mix.

In responding to commodity shocks, the experience of resource-rich countries (Chile, Colombia, Peru, Trinidad and Tobago) has varied.

Key messages: Financial buffers and appropriate institutions (such as fiscal rules and saving funds) can help accommodative macroeconomic policy mix to support economic activity in responding to commodity shocks and to minimize the adverse impact on growth and macroeconomic stability. Exchange rate flexibility was an effective shock absorber and facilitated adjustments. Structural reforms constitute an essential complement to these short-term actions, to lift potential growth over the medium term.

7. Strong fiscal institutions are needed to help achieve and sustain the fiscal adjustment. In particular, in many countries, this will include a need to strengthen public financial management (PFM). Effective expenditure controls are critical to implement the fiscal adjustment, but also to ensure fiscal discipline and implementation of sound fiscal policy (Pattanayak 2016). Further, although the use of resource funds and fiscal rules (e.g., Botswana, Chile, Norway) have had varying levels of success in reducing the procyclicality of government expenditures to commodity prices (with fiscal rules having a larger impact than resource funds), empirical evidence suggests that better institutions do help limit procyclicality; the lack of success of rules and funds in some cases (Azerbaijan, Kazakhstan, Libya) may owe more to the underlying weaknesses of the institutional frameworks than to the rules themselves.

C. Composition of the Fiscal Adjustment

8. Different adjustment strategies may be feasible depending on the needed size of the adjustment and country-specific circumstances.

D. Implications for Trinidad and Tobago

9. Trinidad and Tobago has faced several years of weak or negative growth on the back of terms-of-trade and energy supply shocks. These shocks led to sharp deteriorations in the country’s internal and external balances, exceeding that in most other commodity exporters in the region. The fundamental sources of the fiscal problem are two-fold: (i) the government’s “core” revenues (defined as revenue from taxation, royalties, and customs duties) have been persistently lower compared to the period before the energy shock in 2014, reflecting low energy prices and production, as well as fiscal incentives to attract investment in the energy sector; and (ii) spending in the form of transfers and subsidies have risen to levels that can no longer be sustained by those core revenues; transfers and subsidies are very high by regional standards.

10. The government has adopted several measures to address imbalances and restore confidence. Although the government has built substantial financial buffers through foreign exchange reserves, Heritage and Stabilization Fund (HSF) assets, and large shareholdings of some profitable domestic companies over the years, it has embarked on fiscal reforms to achieve fiscal sustainability and restore external balance, as well as avoiding depleting the country’s financial buffers. These reforms include a range of revenue and spending measures (Annex III, Staff Report),2 as well as allowing a small exchange rate adjustment, while maintaining a neutral monetary policy stance to strike a balance between supporting economic recovery and safeguarding against FX market pressure.

11. While these reforms are positive steps toward fiscal sustainability, a comprehensive medium-term fiscal framework (MTFF) is needed to prepare for future boom-bust cycles in commodity prices. While there are currently two “soft” fiscal objectives (limiting public sector debt to no more than 65 percent of GDP and budget balance by 2020), these are not articulated in a MTFF. Inflows and outflows of the HSF, which could provide a countercyclical policy tool, are neither linked to fiscal indicators nor based on assessment of longer-term fiscal sustainability. A consistent mix of fiscal, monetary, exchange rate, and structural reforms can help contain the impact of commodity price booms and busts.

12. Going forward, fiscal policy should be guided by a MTFF. A well-designed fiscal framework that takes into account potential uncertainties associated with commodity cycles can help improve fiscal management. Countercyclical policy implementation would help smooth the impact of commodity-induced sharp fluctuations in the economy. Toward this objective, the HSF should be integrated with the MTFF to act as a countercyclical policy tool, and flows in and out of the HSF should be guided by an appropriately-designed fiscal target linked to the MTFF, to help reduce procyclicality in fiscal policy implementation. Further, with the sharp decline in capital expenditure in recent years, growth-enhancing public investment should be protected from expenditure cutbacks, helping to offset some of the negative growth impact of fiscal adjustment.

Prepared by Abdullah AlHassan. This annex draws on IMF (2015a and 2016a). Also see Chapter 2 of the April 2018 REO for a comparison with Latin American and Caribbean experiences.

Some reforms have been delayed due to legislative constraints and institutional capacity.

Real Public Expenditure Growth For Commodity-Exporting Countries Before, During, and After Boom and Busts

Capital Expenditures Are Higher In Resource-Rich Countries During Commodity Booms 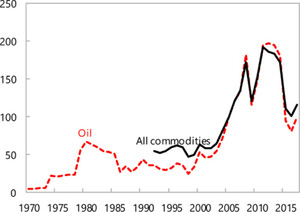 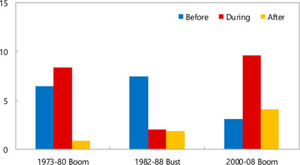 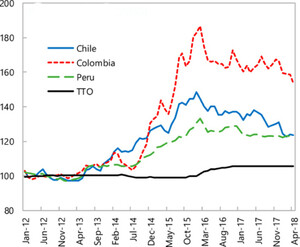 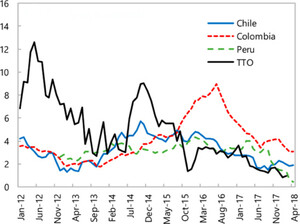 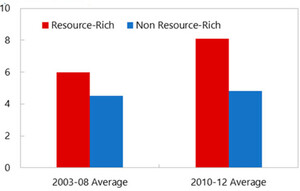