The External Adjustment in Portugal1

Portugal is in the process of a considerable adjustment to improve competitiveness, reallocate resources from the non-tradable to the tradable sector, and lower its high debt to the rest of the world. Despite the recent emergence of current account surpluses, the external balance sheet remains in deeply negative territory. Using a new probabilistic framework to assess external sustainability, this chapter argues that further relative price adjustment is likely to be needed to put external liabilities on a firmly declining path. Under monetary union, the external adjustment will require inter alia more progress on improving price and non-price competitiveness, raising productivity, and increasing growth potential.

2. The global financial crisis exposed the vulnerabilities of Portugal’s deep external indebtedness, and uncovered other structural weaknesses. The decline in the NIIP since 1999 was driven predominantly by the external borrowing of Portuguese financial institutions, which was largely channeled to finance domestic demand. In the years since joining the EMU, unit labor costs had also risen significantly amid structurally rigid product and labor markets (IMF, 2015). Concerns about these structural weaknesses intensified during the market turmoil of 2010–2012, when the deeply negative NIIP conflated with Portugal’s large public debt, its weak growth prospects and the banking crisis in Europe, to raise Portugal’s borrowing costs to euro-era highs.

3. An external adjustment is underway, but the challenge ahead is large in view of the starting position. Since 2011, a significant relative price adjustment has been achieved largely through a decline in ULCs (Figure 2), contributing to the achievement of trade surpluses after many years of large deficits. However, the ULC improvements reflect, to some extent, wage declines and labor shedding (IMF, 2015). Other price-based measures of competitiveness indicate only modest gains since the global financial crisis. As of 2017, the NIIP remains very high and exposes the economy to abrupt changes in financial market sentiment, an increase in the risk premium and the reversal of capital flows. Notably, the European Commission has identified Portugal’s NIIP as one of the drivers of its macroeconomic imbalances.2 At negative 106 percent of GDP, the NIIP remains significantly beyond the Commission’s country-specific prudential threshold of -48 percent.3 To bring the NIIP to a safer level in a reasonable time, larger and persistent current account surpluses will most likely be needed.

4. In the context of a currency union, adjustment to the external balance will require progress on a broad mix of reforms. While a large current account adjustment has taken place since 2010—helping to move the economy towards external balance—it has coincided with a considerable deviation from internal balance. The latter has been epitomized by the rise in unemployment and the widening of the output gap, which have more recently been unwinding (Figure 3). In this context, two inter-related relative price adjustments that draw on a broad range of reforms will be central to the continuing external adjustment:

Over the medium term, full employment can be restored as production is realigned towards tradables, and the change in relative prices induces the required expenditure switching from imports towards domestic goods. Further adjustment of relative prices would need to be derived from sizable productivity gains. Such productivity improvements are essential to avoid a reemergence of trade deficits as the output gap closes and turns positive. Moving up the value chain of export products will help ensure that competitiveness gains achieved through relative price adjustments are sustained.

5. This chapter undertakes an analytical assessment of external sustainability in Portugal. Drawing on a new framework to assess external sustainability (Blanchard and Das 2017), this chapter estimates the real effective exchange rate (REER) depreciation required to lower the NIIP to a range of indicative thresholds. When stocks of external assets and liabilities are large, as they are in Portugal, even small changes in the rates of return on these holdings can create large valuation changes, and strong stabilizing or destabilizing dynamics on the NIIP. Unlike standard approaches, this framework considers that external adjustment can occur both through adjustments in future net exports, as well as this “financial channel” that gives a role for valuation changes to shape NIIP dynamics. The output of this exercise is a probabilistic assessment—the probability that a REER depreciation is required to attain the desired level of the NIIP—which accounts for the uncertainty of forecasts used in evaluating the external budget constraint (see Annex I, Section A).

B. Stylized Facts about the External Balance Sheet in Portugal

6. Reflecting the highly leveraged positions of Portuguese banks and non-financial corporates, the NIIP has a high concentration of debt liabilities. The domestic demand boom preceding the global financial crisis was intermediated by external borrowing by Portuguese financial institutions, which were concentrated in loans and other debt instruments. The predominance of debt liabilities has implications for the evolution of the NIIP since, unlike equity liabilities whose value declines with a downturn, debt and debt service payments tend to remain largely fixed. While inward FDI has recently started to increase, it still plays a relatively small role in the external balance sheet (Figure 4).

7. Servicing the large stock of net external liabilities has led to a steady drain through the investment income account and hindered the external adjustment. Before the crisis, the current account balance in Portugal was determined largely by the trade balance, which was -9.4 percent of GDP in 2008 (Figure 5). Meanwhile, interest payments on accumulated liabilities rose steadily, reaching a peak of 4 percent of GDP in 2008. Since 2012, however, even as the trade balance has moved into a small surplus, net income flows on the negative NIIP have remained large and negative, hindering improvement in the current account balance, although they are partially offset by current transfers. Capital transfers have been stable, helping the external adjustment.

8. Since euro accession, Portugal has paid a modest risk premium on its external liabilities relative to the return it has earned on external assets. The total rate of return is the sum of the dividend yield and capital gain. While the total return Portugal has earned on its foreign assets and paid on its liabilities is volatile year to year, on average the differential has been mildly negative, averaging -0.9 percent between 1999 and 2016 (Figure 6).4 The path of future return differentials can have material implications for external adjustment: all else equal, if a positive return differential is sustained, it will speed the reduction of the NIIP to GDP ratio to a lower level; a persistent negative return differential will, however, exert destabilizing dynamics, delaying the stabilization of the NIIP.

9. A structural shift in local currency denomination of external liabilities has lowered, though not eliminated, the exposure to currency risk. After the inception of the EMU, in addition to redenomination of all liabilities previously denominated in eurozone currencies, the share of both external assets and external liabilities denominated in other foreign currencies declined, lowering currency risk.5 This implies that valuation changes will largely arise from changes in asset prices, and much less so from movements of the currency.

10. A successful external adjustment will require that the NIIP is lowered from its current level. Echoing the European Commission’s recommendations to lower the NIIP to a prudential threshold, the analysis below considers several thresholds ranging from an upper bound of -95 percent to a lower bound of -60 percent, and computes the REER adjustment consistent with attaining that level.6 The long projections and key equations underlying the analysis are in the Annex I, Section A.

11. The structural changes required to support the external adjustment are likely to take place over a long horizon. Policies to address the restructuring of corporate debt, lower public debt and address the structural rigidities in labor and product markets are on the right path, but will require some time to realize their full impact. The practical implication is that the analysis must provide for a sufficiently long horizon to conduct a sustainability assessment. We thus extend the 5- year forecasts in the World Economic Outlook (WEO) to 15 years. For example, in the WEO (Annex I, Table A1), the sum of the trade balance and current transfers in ratio to GDP are projected to progressively decline by 2023; the long projections extend these forecasts under a balanced growth assumption, resulting in a steady-state trade deficit of -1.3 percent of GDP in 2033. Projections over such long horizons are subject to an unusual degree of uncertainty, and their results should therefore be interpreted with caution. They are more indicators of relevant economic forces and trends, and their implications, than they are “forecasts” properly speaking— and this word should be understood this way.

12. In the deterministic case, a real effective exchange rate (REER) depreciation of between 8 and 16 percent is required to stabilize the NIIP at lower levels. This approach produces one path of forecasts, assuming economic relations hold with certainty. The key results f the deterministic assessment are as follows:

13. The probabilistic assessment of sustainability takes account of the uncertainty of future real and financial shocks. The sustainability of the NIIP is fundamentally a probabilistic question, as forecasts of growth, net exports, gross positions and the rates of returns used in assessing sustainability are random variables. Following the approach in Blanchard and Das, we use the historical outturns of these variables in Portugal to construct their joint distribution, draw shocks from this distribution, and compute the required REER adjustment to stabilize the NIIP at the varying targets shown above under a variety of realizations of those shocks. This way we can derive an estimate of the probability that a REER depreciation may be required to reach a given target NIIP in the chosen 15-year horizon.

14. Shocks to relative prices may arise from asymmetric price adjustments in the tradable versus the nontradable sector. As there are two deflators—the CPI and ULC— conventionally used in constructing the REER, we consider joint distributions of shocks corresponding to each of these (Annex I, Table A2), and assess sustainability using results from both. Two observations are relevant:

15. Taking into account the uncertainty of forecasts, the probability that the REER needs to depreciate to some extent to stabilize the NIIP at lower levels is estimated between 55 and 67 percent. Our findings are as follows:

The country-specific prudential threshold for the NIIP is derived from a univariate signaling approach that identifies the NIIP level at which an external crisis is likely to begin. The threshold widens with increasing income per capita. See also European Commission (2017) and Zoppe and Copland (2017).

The choice of 15 years balances a horizon long enough to effect deep structural changes without being too long to compromise the plausibility of the exercise.

Rates of Return Differential between External Assets and External Liabilities, 1999–2016 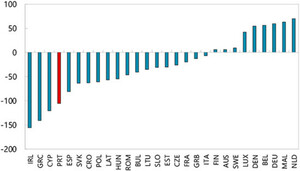 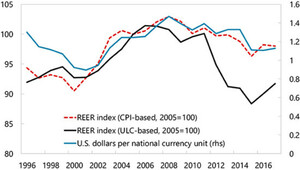 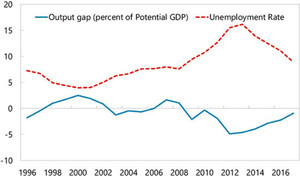 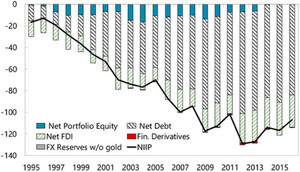 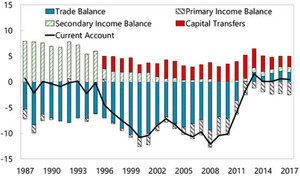 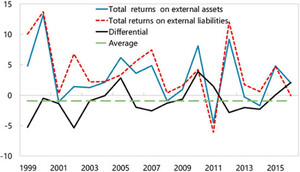 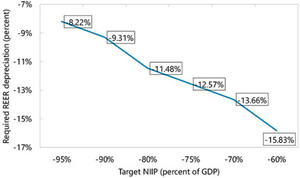 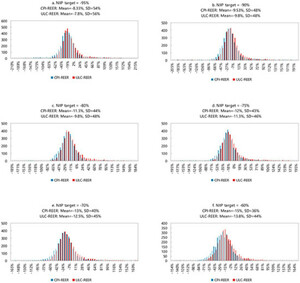 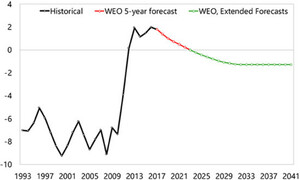 Correlation Matrices of the VAR Innovations