1. To accelerate growth and improve living standards, Portugal needs to promote capital accumulation and productivity. The stronger growth is needed to lift per capita income, which is below the EU average, with the gap widening over time, and to reduce debt ratios to safer levels. To achieve higher investment and total factor productivity (TFP) growth rates, Portugal needs to address structural and institutional problems impeding the efficient use of available technologies and resources. The main challenges to investing in Portugal include excessive business regulation, labor market rigidities, inadequate access to finance, and insufficient availability of skilled staff.2

2. Raising investment is crucial for supporting potential growth over the medium-term, given Portugal’s adverse demographic trends. Potential growth has improved over recent years, supported by stronger contributions from TFP growth and labor, benefiting from the structural reforms and economic recovery. Going forward, ageing and decreasing population will weigh on labor’s contribution, and intensify pressures on social programs, pensions, and health care. As the ratio of workers to total population declines, people will need to adjust their consumption by saving more for retirement. A more efficient labor market and human capital development would mitigate the impact of demographic pressures, and also help to boost investment. Higher investment in turn would also support labor productivity through capital deepening.

3. The paper proceeds as follows. In the next section, we look at investment dynamics over the last two decades, including a decomposition by economic sectors and by economic activity. In the third section, we analyze factors that supported or held back the post-crisis recovery of investment. In the fourth section, we discuss the investment and productivity growth paths required to sustain strong medium-term growth and identify structural bottlenecks to higher and more productive investment. The last section concludes with policy implications.

B. Investment and Capital: From Crisis to Recovery

4. Despite notable recovery over the past few years, the investment rate in Portugal remains among the lowest in EU. After rapid growth in the 1990s, real investment declined to a more moderate level during the years preceding the global financial crisis, despite a growing reliance on external financing. A brief pick-up in total investment in 2007–2008 on the back of higher public investment was followed by a sharp decline in the process of correcting external imbalances. In 2017 investment increased to 16.2 percent of GDP, still below the EU average of 20.1 percent. With gross domestic saving increasing, the recourse to foreign financing diminished substantially in the last decade.

5. From a sectoral perspective, the recovery of investment has been supported primarily by corporate investment, with households’ investment remaining mostly flat in recent years. The build-up of external imbalances and the subsequent adjustment were primarily driven by the private sector, notably by non-financial corporates (NFCs). Household investment has declined since 2000, flattening out at around 3.2 percent of GDP in the past few years. Household saving has declined post-crisis to 3.6 percent of GDP in 2017, low by advanced countries standards. The divergent trends of corporate and household saving in Portugal are in line with a shift in the composition of saving away from the household sector and toward the corporate sector at the global level (Chen, Karabarbounis, and Neiman, 2017).

7. R&D investment is low and led mostly by the public-sector. Spending on R&D in 2015– 16 stood around 1 ¼ percent GDP, below the pre-crisis peak of 1.6 percent and also below the OECD and EU averages.3 Portugal outperforms the OECD and EU averages in some indicators,4 such as “the number of researchers per thousand employed,” and also scores well in “availability of scientists and engineers”, “quality of scientific research institutions”, and “technological readiness”. However, Portugal lags compared to the EU averages on “innovation activity” (although it improved in 2017 compared to 20165) and “facilitating business entry, growth, and exits for start-ups”. R&D and innovation resources are mostly concentrated in non-commercial sectors, weakening technology absorption and diffusion and, as a result, limiting their positive impact on productivity growth.

8. Portugal’s estimated capital stock is below the EU average, both in percent of GDP and per capita, as lower investment during the crisis years took its toll. Lower capital together with stronger employment in recent years resulted in a decline in capital intensity (the amount of fixed capital per worker), adversely affecting labor productivity.

9. The business investment recovery appears to be weaker than what could be expected based on economic activity. The literature suggests that a slump in business investment after a crisis is usually a symptom of weak economic activity. The conventional accelerator model of investment assumes that firms adjust their capital stock gradually toward a level that is proportional to output, investing to replace capital that depreciates over time. Therefore, investment is supposed to respond positively to current and lagged changes in output and to the lagged capital stock:

where Itdenotes real business investment and denotes the change in the desired capital stock, which is assumed to be proportional to the change in output: . 6 Estimating this model with Portuguese data, suggests that investment in Portugal remains below the level that would be predicted given the pace of economic activity.

10. Financial constraints and policy uncertainty appear to be the most relevant factors holding investment back, especially in economies affected by the crisis. Adding those two factors7 into the accelerator model helps to explain investment dynamics better (IMF, 2015). Financial constraints are measured as the percentage of respondents in the European Commission’s Business and Consumer Surveys that identify such constraints as a factor limiting their business production. Uncertainty is measured by the Baker, Bloom, and Davis’s (2013) index of policy uncertainty, which is based on newspaper coverage of policy-related economic uncertainty. These factors, added to economic activity in the accelerator model, bring model-predicted investment closer to observed investment. Using alternative measures such as the Composite Indicator of Financial Stress (Braga, Pereira, and Reis, 2014) and survey-based uncertainty measures (Manteu and Serra, 2017), the model tracks investment dynamics better during the crisis and produces similar fit for the post-crisis years (see Figure 1 in Annex I).

11. Investment in Portugal is also hampered by still-high leverage. At end-2017, the nonfinancial corporate sector’s debt stood at 137.7 percent of GDP.8 Already high-debt contributes to the presence of financing constraints experienced by firms. In addition, the still large stock of bad loans on their books constrains banks’ ability to grow their balance sheets and provide substantial new credit for investment. The smaller firms, which are more reliant on bank financing, were found to have a lower investment response to aggregate demand (IMF, 2016a).

12. The reduction in labor costs and the improved competitiveness mitigated the impact of financial constraints by boosting firms’ internal financing. The profit margins of NFCs were on a declining path prior to the crisis, with this trend reversing in 2009. The chapter on “Deleveraging and Profit Margins in Portugal” analyzes the determinants of NFC profit margins and finds ULCs to be negatively related to profit margins. Declining labor costs and a weaker REER contributed to the recovery of investment by NFC from 2013.9 The impact of lower real ULC and weaker REER is interconnected and is in line with research findings that depreciations support internal financing opportunities, spurring investment (Berg, Dao, Minoiu, and Ostry, 2015).

13. Portugal needs higher investment and productivity growth rates to support strong real GDP growth in the medium term. Extending the production function framework developed in IMF 2017a, we derive the average annual TFP growth rates needed to achieve the real GDP growth path envisaged in the 2018 Stability Program, for different investment growth paths, given demographic trends affecting labor’s contribution to growth. The implied TFP growth in the Stability Program forecast is ambitious (around 0.9–1.0 percent10) compared to the historical average of around 0.5 percent. On one hand, the ongoing changes in skills, investment allocation and export orientation may justify expectations of a higher TFP growth going forward. On the other hand, labor productivity has been subdued in recent years, in line with the slowdown in productivity growth in advanced economies. And the increased openness of the economy makes it more vulnerable to external shocks, including “trade wars.” To enhance their impact on aggregate productivity, improvements in education and skills need to be accompanied by more efficient labor utilization.11

14. According to available surveys, boosting investment and productivity would require addressing a number of structural bottlenecks. The 2017 EIB Survey on Investment identified the following as the main obstacles to investment activities: uncertainty about the future, business regulations, energy costs, labor market regulations, and availability of skilled staff. Similarly, the World Economic Forum’s Global Competitiveness Report identifies these areas as constraints to competitiveness: unpredictable regulatory environment, inefficient judicial system, high public debt, labor market rigidities, access to finance, and functioning of banking system. Figure 1 illustrates these structural gaps and others for Portugal. Some of the indicators are based on expert judgement and survey of hard data, and are subject to uncertainty around point estimates. The rankings reflect relative (and not absolute) performance.

Several EU co-funded investment projects are planned for the next four years, focused on R&D and innovation.

The most recent EIB Investment Survey identifies these two factors among the main barriers to investment in Portugal (EIBIS, 2017).

The regression estimation results are available in Annex I.

The estimates depend on parameters such as capital’s share in income (Alpha). However, for any Alpha in the range of 0.35–0.45, the implied TFP growth in the Stability Program projections is significantly higher than the historical average.

Alves (2017) suggests that misaligned incentives and labor market segmentation resulted in labor and skill misallocation, limiting the impact on aggregate productivity growth of the substantial improvements in education achieved so far.

See the chapter on “Taking Stock of Reforming the legal and Institutional Framework for Debt Enforcement and Insolvency in Portugal”.

Accelerator with Financial Constraints and Uncertainty 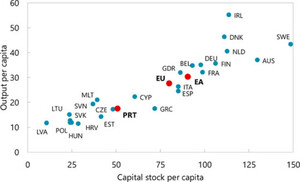 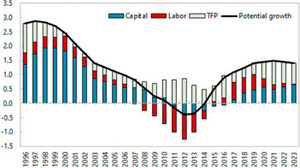 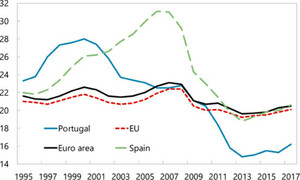 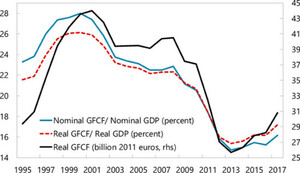 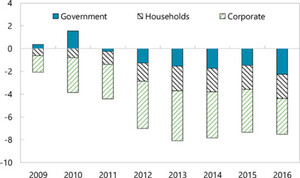 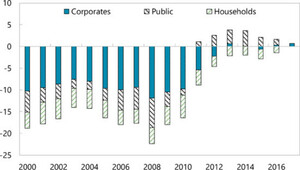 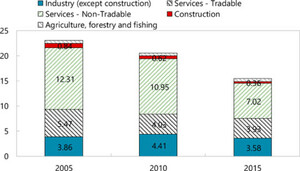 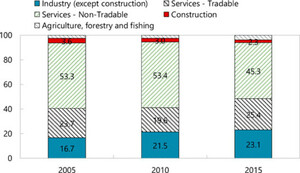 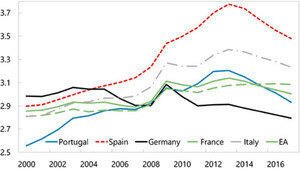 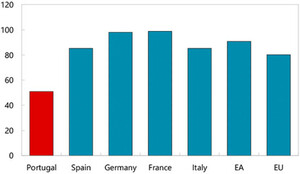 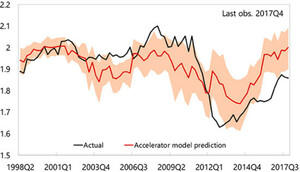 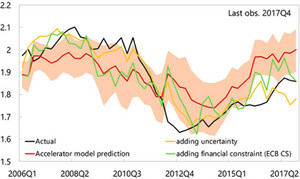 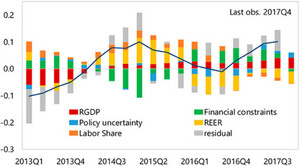 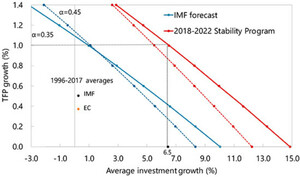 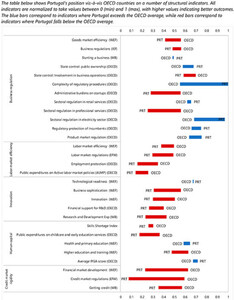 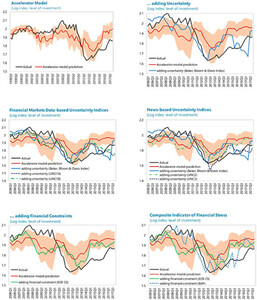 Powered by PubFactory
Close
Table A1.