Fiscal Discipline in Indian States: Market-Based and Other Options1

States’ finances have deteriorated in recent years, and states are a key determinant of general government public finances. Traditionally fiscal discipline has been imposed on states through central control over state borrowing and states’ self-adopted fiscal rules. Market-discipline in combination with fiscal rules can strengthen fiscal discipline; but is not found to be effective so far in Indian states despite predominantly market-based financing. To strengthen the role of market discipline, fiscal reforms should focus in the near term on further liberalizing financial markets, improving the quality and timeliness of state fiscal data, ensuring sufficient fiscal flexibility for states to respond to fiscal shocks, and, over the medium term, on steps to strengthen no-bailout expectations.

1. In the early-to-mid 2000s, all Indian states adopted fiscal rules, which helped improve their fiscal positions. Aggregate deficits of states declined following the adoption of the 3 percent of GDP fiscal deficit limit, from above 4 percent of GDP to 2 percent of GDP by FY2010/11.

2. Subsequently, fiscal discipline at the state level has deteriorated. Since FY2010/11, even as the central government has consolidated, the deficits of states have been on a rising trajectory, though states have largely adhered to the 3 percent of GDP deficit limit. The states’ share of the general government deficit increased from 23 to 43 percent, as their expenditure share rose by about 10 percentage points and their revenue share by around 4 percentage points.

3. With high public debt, consolidation remains a key fiscal policy priority, including at the state level. With general government debt hovering around the 70 percent of GDP mark and the states’ share estimated at just over 25 percent of GDP (FY2017/18 budget estimates), India has limited fiscal space and needs to consolidate to build buffers and lower public debt.2 In this context, this chapter explores the options to enhance fiscal discipline among states, particularly the role of market discipline—i.e., differentiation in states’ borrowing costs depending on their fiscal health.

4. States’ borrowing from the market has grown significantly over time. The share of states’ liabilities to the market has risen from less than a fifth of outstanding liabilities in 1992 to more than half in FY2016/17. This would suggest a possibility that states could be subject to increased market discipline, supplementing the role played by states’ fiscal rules and central control over state borrowing, in ensuring state fiscal discipline.

5. In this chapter, we assess whether market discipline has indeed emerged in India, and how it can be strengthened. In Section B we assess empirical evidence on the presence of market discipline using state-wise data on yields on debt, state fiscal indicators, and other characteristics. We also compare results with evidence on sub-national-level fiscal discipline and the role of the markets in other countries. In Section C we examine the conditions that help strengthen market discipline, drawing on the literature, and highlight the reforms that are important in the Indian context. Section D concludes.

B. Empirical Evidence on Market Discipline

6. Despite a growing share of market borrowing, state borrowing is perceived to be backed by central guarantees. Rangarajan and Prasad (2013) assess that among the main instruments of state borrowing, except for loans from banks and financial institutions as well as contingent liabilities, all other instruments (market and external borrowings) are perceived as implicitly guaranteed by the center, as the center permits states to borrow from the market and externally, and sets ceilings for states’ loans and contingent liabilities.3 This undermines market discipline as lenders have little incentive to distinguish among stronger and weaker states under a central guarantee.

7. The presence of guarantees reflects market development concerns. To encourage market lending to states and to grow the state debt market, the RBI acts as the guarantor for creditors by imposing stop-payments on state spending and having a first claim over state revenues to ensure that states meet their repayment obligations. These features strongly contribute to the perception—indeed reality—of state debt being backed by guarantees. The practice of bunching issuance of heterogenous states also contributes to less differentiation among states. That said, some differentiation is reportedly observed in the very recent data, particularly among some states such as Maharashtra, Tamil Nadu, and Telengana.

8. To empirically assess the presence of market discipline, we estimate a model following Sola and Palomba (2015):

Where spread is the weighted-average state bond (SDL) yield minus the yield on ten-year central government bonds in state i and year t. A state’s own fiscal balance is in percent of state GDP (SGDP) and is calculated as the difference between expenditures (excluding expenditures on central schemes and centrally-sponsored schemes) and own tax and non-tax revenues. liquidity is calculated as the call money rate minus the midpoint of the repo and reverse repo rate, and is thus an indicator of liquidity in aggregate. A positive value denotes tight liquidity conditions. The EMBI index measures the value of bonds in emerging markets and proxies for global market conditions. Data are collected from the Centre for Monitoring Indian Economy (CMIE) and CEIC Data. The data for SDL yields are from the secondary market and cover 2010 to 2017 for 28 states. Due to lags in availability of state data, we cover 2015 for all states and 2016 for more timely states.

10. Econometric estimates suggest that state fiscal fundamentals do not explain spreads. State fundamentals are not significant and explain only 5 percent of the variation in spreads. Estimates adding liquidity conditions and global returns on bonds increases the explanatory power to 70 percent of the variation in spreads with both variables significant at the 1 percent level. This fundamental finding is robust to various models including those with dummy variables for political alignment with the center, early adoption of fiscal rules, and higher-than-average reliance on transfers.4 Excluding special category states (mostly smaller states in mountainous regions) does not impact the baseline results. These results also conform with previous findings that show that fiscal variables do not drive differences in SDL yields (Bose et al. (2011), Saggar et al. (2017)).

11. The broader literature covering other countries, however, does find evidence of market discipline. The evidence largely relates to advanced economies, but serves to illustrate the importance of key elements that support market-based fiscal discipline among sub-national governments (SNGs). The empirical design of these studies is broadly similar to the one presented above, with direct relationships between SNG spreads and fiscal fundamentals (deficits and debt, typically), and specifications that include interactions with other fiscal institutions such as fiscal rules and credible commitments precluding bailouts of SNGs by the national governments. Briefly:

12. The international evidence indicates conditions that enable market discipline to function well. For instance, the appropriate fiscal institutions, ability to respond to shocks, and weakening bailout expectations emerge as important enabling conditions for market discipline. Indeed, the literature has identified four conditions that are helpful (Lane (1993) and Ter-Minassian (2007)):

13. Reforms could initially focus on improving data quality and further liberalizing financial markets. This would help to strengthen the ability of the market to discriminate across states and improve the market for state debt. Over the medium term, strengthening the no-bailout expectation could proceed with the adoption of an explicit bailout framework. Even without bail-in features, such a framework would still help achieve the primary objective of maintaining prudent fiscal policies at the state level. To that extent, stronger fiscal rules would also strengthen both the primary objective and enable market discipline. It is also possible to introduce differentiation in borrowing costs using differentiated risk-weights, though such a mechanism would (i) require high quality state fiscal and other data—a condition that also strengthens market discipline, and (ii) may be problematic from a political perspective as the regulator would become the focal point for states borrowing costs.

14. Several measures introduced recently by the RBI should help increase yield-differentiation across states. These measures include:

15. Market discipline may be a useful channel to maintain prudent state finances. While at present there is little evidence of its effectiveness in India, the international evidence shows it can be effective, particularly when complemented by strong fiscal rules and commitments to no bailout. There are relatively low-hanging reforms that would boost market discipline, focusing on strengthening data quality and timely availability among states, and continuing to liberalize financial markets. While the introduction of GST may have de-jure reduced revenue autonomy at the state level, a buoyant and productive GST would prevent potential revenue constraints on state governments; though Indian states appear to have a relatively high degree of revenue and expenditure autonomy overall compared to other federations. Finally, weakening the perception of central bailouts could credibly be achieved by adopting an explicit bailout framework (including with bail-in features) that imposes costly adjustment on states (and creditors), strengthening the foundations for prudent management of state finances.

About 140 basis points of increase in state debt to GDP over the last 2 years is explained by broad subscription by states to the UDAY scheme to fix state power sector financial problems, by taking over the debt of state electricity distribution companies to allow them to resume operations, in return for commitments to fix power sector problems.

Though the authors list borrowing against small savings and provident funds as not perceived to have a guarantee, the authorities view these instruments as also perceived to be backed by guarantees.

Results are available upon request. 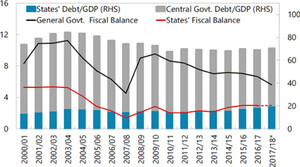 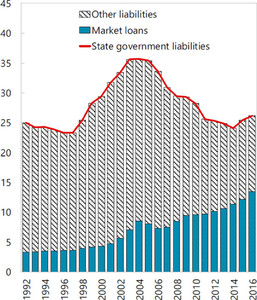 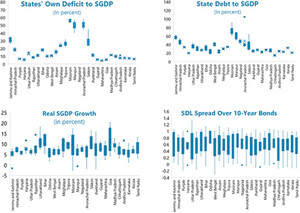