India has been one of the fastest-growing economies in the world in recent years, partly reflecting key structural reforms that have been implemented. Among these reforms are the inflation-targeting monetary policy framework, the Insolvency and Bankruptcy code, the goods and services tax (GST), and steps to liberalize foreign direct investment (FDI) flows and the ease of doing business. This background paper for the 2018 Article IV consultation with India explores possible further enhancements to the structural reforms, including to help reap the full benefits of India’s potential demographic dividend over the next few decades.

The first chapter discusses potential trade-offs of simplifying the GST—a milestone reform in India’s tax policy. While the GST unified and harmonized numerous indirect taxes, it has a complex structure, which could be simplified without sacrificing progressivity of the current GST and with potentially significant gains from lower compliance and administrative costs.

The second chapter analyzes states’ finances, which have deteriorated in recent years. Traditionally, fiscal discipline has been imposed on states through central control over state borrowing and through states’ self-adopted fiscal rules. Market discipline could be strengthened through reforms focusing in the near term on further liberalizing financial markets, improving the quality and timeliness of state fiscal data, ensuring sufficient fiscal flexibility for states to respond to fiscal shocks, and, over the medium term, on steps to strengthen no-bailout expectations.

The fourth chapter examines the nature, magnitude, and sources of resource misallocation across Indian states. As strict labor market regulations appear to be a major contributor to misallocation, further labor reforms will improve firm-level efficiency and productivity.

The goods and services tax (GST) is a milestone reform in India’s tax policy, taking the important step of unifying and harmonizing numerous indirect taxes across all states of the federation and the central government. Yet, the GST has a complex structure with a relatively high number of rates (and exemptions), which could be simplified without sacrificing progressivity of the current GST and with potentially significant gains from lower compliance and administrative costs. A dual rate structure with a low standard rate and an additional higher rate on select items can be progressive and preserve revenue neutrality, while streamlining exemptions would further contribute to progressivity and reduce compliance and administrative costs.

1. The introduction of the GST on July 1, 2017 was a critical and long-awaited reform to India’s indirect tax system. The GST subsumed numerous existing taxes at the center and states, including central excises and state valued-added taxes (VATs), the central service tax, countervailing and additional duties, and numerous levies such as on entertainment and gambling. The implementation of the GST led to the key step of harmonizing indirect tax rates on goods and services that previously differed across different states and the center, and brought services into the state tax net (earlier services were taxed only by the center and excluded from the state VAT).

2. India’s GST has a multiple rate structure, which is relatively rare among countries with a VAT. India belongs in a small group of (five) countries having four or more GST rates (four nonzero rates of 5 percent, 12 percent, 18 percent, and 28 percent; special low rates of 3 percent on gems and jewelry and 0.25 percent on rough diamonds; and a GST “cess” levied on demerit goods). In comparison, among 115 countries with VATs, 49 have a single rate, and 28 have two rates.2

3. The multiple rate structure in part reflects the demands of fitting multiple pre-GST tax rates on the same items. Rate fitment of items taxed differently under the previous excise and VAT regimes necessitated creation of in-between rates that would continue to yield revenue neutrality. For instance, a product taxed under a state VAT but zero-rated under excise taxes on the same good, say due to merit-good status, would need to be taxed at an intermediate rate under the new GST, to remain revenue-neutral.

4. The multiple rate structure and other features of India’s GST environment could give rise to high compliance and administrative costs. In general, high costs may stem from factors highlighted below, some of which may be relevant in the Indian context:

5. There is a broad consensus among economists that fewer rates and exemptions reduce these costs (Owens et al. (2011), OECD Observer (2011)). Overall tax compliance costs can be quite high, ranging between 2–10 percent of revenue yields, as high as 2½ percent of GDP (Barbone et al. (2012)). The evidence on VAT compliance costs varies widely across countries (and methodologies). While evidence on GST compliance costs in India are scanty, anecdotal evidence suggests that for large firms, the cost has increased from negligible shares to 0.2 percent of total costs (excluding switch-over costs which are estimated to be around the same level), though there are economies from switching to a simpler tax structure particularly for inter-state commerce. It is also taken as well established in the literature that compliance costs are regressive.3 Another important benefit of a simpler rate structure is that it would reduce opportunities to lobby for lower rates among firms.

6. A simpler rate structure with fewer exemptions, however, would be less progressive. With the consumption basket of the rich taxed at higher rates than that of the poor, the GST as presently designed has an effective tax rate rising with household consumption. A revenue-neutral reduction in the number of rates would raise the effective rates for poorer households while reducing those for richer households. This is the key cost of moving to a simpler system.4

7. This chapter assesses the trade-offs in further simplifying India’s GST. We will estimate the change in the incidence of the GST across household consumption quintiles if a revenue-neutral shift was made to a single rate or a single rate supplemented by a high rate on certain items (Section B). While compliance costs are in general significant for taxes, GST/VAT compliance and administration costs are harder to generalize due to high variation in the evidence and with only nascent experience with the GST in India. However, we note the broad consensus on the desirability of a simpler GST structure. We also address some concerns on the impact for informal/small firms from moving to a single rate, and note caveats related to the analysis (Section C). A brief conclusion is offered in Section D. Data and methodological issues are addressed in the Appendix.

B. Incidence of the GST

“Can we have milk and Mercedes at the same rate?” – Prime Minister Modi.

8. The GST in its current design has a progressive incidence (Figure 1). The estimated total incidence includes both the direct incidence due to goods and services that are taxed and the indirect incidence that is due to the embedded input taxes on exempted goods (see Appendix for details). The estimated (average) effective GST rate on the lowest quintile of households by consumption expenditure, including both direct and indirect incidence, under the current GST rate structure (as of January 2018) is 9.0 percent. This rises only gradually to 9.6 percent for the fourth quintile and 10.5 percent for this topmost quintile.5

9. Due to embedded input tax costs, exemptions have a regressive effect. A key finding from this exercise is that the indirect incidence of the current GST disproportionately burdens poorer households, undoing the objective behind having exemptions. The lowest quintile faces an additional 2.5 percent effective GST rate since exempt goods production cannot avail of input-tax crediting (and input tax costs are thus likely passed on to the final consumer). This indirect incidence regressively diminishes with higher consumption due to the lower share of exempt goods in the consumption basket of higher quintiles, falling to 1.7 percent for the highest quintile.

11. A single rate thus causes the effective GST rate to rise significantly for the lower quintiles and fall for the highest. Such a profile is likely to pose political feasibility constraints. Therefore, we consider an alternative simulation where a single rate is supplemented with an additional (higher) rate to target the consumption of the higher quintiles. This enables a standard rate lower than 10 percent, helping to reduce the effective rate paid by lower quintiles.

12. A dual rate GST would be able to deliver a progressive incidence at little additional cost to poorer households. A revenue-neutral combination of a 9 percent standard rate and a 25 percent high rate (applied to items that in the current GST are taxed at 28 percent), while retaining the current set of exemptions, is simulated (Figure 3). The resulting profile of total GST incidence reveals a modestly progressive incidence. The total incidence on the lowest quintile is 9.6 percent, rising gradually to 10.1 percent for the highest quintile. Note that as usual, with the existing set of exemptions in place, the indirect effect erodes progressivity.

13. Other adjustments to such a dual rate system would help increase progressivity. Note that adjustments to the dual rate system could also be made to enhance its progressivity, with more selective application of the higher rate to exclude the consumption of poorer households as much as possible, and adjusting the top rate higher as required. In addition to more selective application of the high rate, eliminating exemptions would improve the progressivity of the tax by eliminating the regressive indirect incidence.

14. There are important caveats/complications to address in the foregoing analysis.

15. Simplifying the GST is possible without imposing a significantly higher burden on the poor. For example, a dual rate structure with a low standard rate (and high rate on high-value consumption items) would still allow for progressivity, as would rationalizing exemptions by eliminating the regressive indirect incidence from unrefunded input tax costs.

16. There are likely significant benefits from lower costs of compliance and administration. The literature on VAT compliance costs shows that there is broad variation across countries; however, there is a consensus that compliance costs are regressive, and administrative costs increase with complexity. While evidence on India is nascent and remains to be assessed as experience with the GST is gained, anecdotal evidence from large firms indicates sizable increases in costs, which may be even more burdensome for smaller firms. Streamlined rates would also weaken incentives to lobby for lower rates.

17. These conclusions are broadly robust to the caveats. While data constraints preclude accurately assessing all the implications, the conclusions appear to hold under plausible cases.

“The regressivity of the compliance burden, especially for VATs, stems from the large diseconomies of scale involved in complying with tax requirements, together with the learning curve effect that militates strongly against small firms…” (Barbone et al. (2012)).

That said, it is noteworthy that since its implementation the GST rate structure has been streamlined to an extent, with most of items being moved out of the top 28 percent bracket (which would reduce the progressivity of the tax).

Estimates of the incidence in this Section are based on household consumption expenditure survey data, which yields lower GST standard rates than have been estimated using other data sources. For instance, see Report on the Revenue Neutral Rate and Structure of Rates for the Goods and Services Tax (GST) (December 2015), which shows estimates ranging from 11.6 percent to 17.7 percent for the revenue neutral rate.

For debates regarding the appropriateness of NSS data for setting the poverty line, see Sundaram and Tendulkar (2001) for instance.

According to the 2016 Economic Census of India, there are 58.5 million establishments in operation, of which 45.4 million are in non-agriculture (including the public sector). Currently 10.4 million firms are registered, of which 1.3 million are under the “composition scheme” (availing the flat tax but not the input tax credit).

(By consumption quintile, in percent) 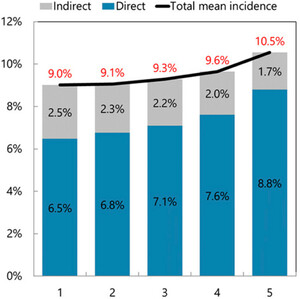 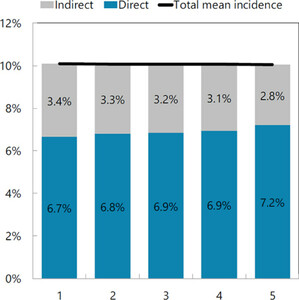 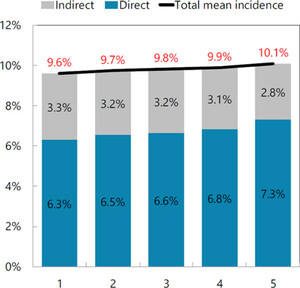