A CLOSER LOOK AT LABOR PRODUCTIVITY IN CANADA1

A. Recent and Historical Trends

2. Nonetheless, from a long-term perspective, Canada’s productivity remains much weaker than the leading G7 economies. OECD estimates of labor productivity (at constant purchasing power parity) suggest that Canada enjoyed the second highest productivity level after the U.S. in the 1970s. However, labor productivity has since grown more slowly in Canada than in other economies, and as a result, Canada has fallen behind France and Germany, and its productivity gap with the U.S. has widened from around 12 percent in the 1970s to 24 percent today.

3. Looking forward, an aging population will put a drag on growth in Canada. Statistics Canada projects that the share of working age population (ages 15–64) would fall from around 67–68 percent today to 60 percent in 2040 (under its medium-growth scenario). This implies that growth of the working age population would decelerate from 1 percent to less than 0.5 percent a year. Were labor productivity growth to stay the same (an average of 1.2 percent in 2010–17), GDP growth would decelerate to 1.7 percent a year, significantly below the average growth rate of 2.2 percent over the past one and a half decades. To reverse the negative implications of an aging population, Canada will need to boost labor productivity.

4. Using data from Canadian firms, as well as industry-level and provincial data, we analyze labor productivity and business investment trends. We ask the following three questions.3

B. What is Restraining Labor Productivity Growth?

5. The structure of Canadian industry has evolved markedly over the past decades. As in many other advanced economies, Canada’s industry structure has shifted towards the service sector, with the share of manufacturing industry halved from over 20 percent in the 1960s to about 10 percent today. Given that the growth of labor productivity in manufacturing industry has been much higher than most of other industries, its shrinking share could explain part of the long-term declining trend of labor productivity growth.

Comparable US 2016 data not available.

Comparable US 2016 data not available.

C. How Does Firm Productivity Relate to Investment?

8. Several factors could explain the slowdown in business investment growth. Among them, aggregate demand, financial constraints, and policy uncertainty are generally viewed as the most important drivers of the dynamics of business investment (see for example, IMF, 2015). In the aftermath of the global financial crisis, a recovery in economic activity in Canada’s trading partners (most importantly, the U.S.) was weak. Moreover, although U.S. economy finally began to gain momentum around 2014, global oil prices dropped sharply, hitting the Canadian economy. More recently, heighted trade tensions in the North America region may have contributed to dampening business investment.

9. We look at another possible factor: Canadian firms’ productivity. Because measuring productivity using micro firm-level data has some challenges (for example, due to the lack of data for firms’ output prices), we instead estimated firms’ markups (defined as price over marginal costs), following the empirical framework developed by De Loecker and Warzynski (2012). As well argued in De Loecker and Warzynski (2012), firms’ productivity and markups are closely associated, as productive firms tend to set higher markups.4 Due to data constraints, our analysis below focuses on markups for large Canadian (non-energy) firms using Worldscope database (see Appendix I for more detail). Note that energy firms are excluded from our analysis because we are mainly interested in the productivity trend in the non-energy sector.

12. We estimate Tobin Q’s type investment models to examine whether these markup and industry competitiveness measures could be considered as part of business investment determinants. We embed markups and industry level competitive indicators, such as entry and exit rates and China’s import penetration rates, in a standard Tobin Q’s type investment model (Appendix II). The sample period is 1997–2016. The estimation methodology is OLS with fixed effects, and regression results are reported in Table 2.

D. How Important is Technology and Productivity Diffusion from the U.S. to Canada?

14. What about spillovers from the U.S. to Canada? Even though R&D stock in Canada remains lower than that in the U.S., Canada should have been benefitted from technology and knowledge spillover effects across its southern border, and such spillover effects may have been magnified as the economic ties between the two economies have become stronger since the Canada-United States Free Trade Agreement (1987) and North American Free Trade Agreement (1994).

15. We test productivity spillover channels from the U.S. to Canada. Using data from 10 Canadian provinces, labor productivity growth models are estimated (Appendix III).8 The sample period is from 1990 to 2015, and the annual data are averaged for five 5-year periods (a balanced panel data set). We are interested in long-term relationships and thus want to exclude cyclical effects arising from short-run business fluctuations. Our hypothesis is that labor productivity growth or real R&D expenditure in the U.S. would affect Canada’s productivity through trade channels. We calculated Weighti,j as Canadian province i’s total trade (=exports + imports) with U.S. state j as a percent of province i’s GDP, which is used to weight U.S. labor productivity growth or real R&D expenditure (as percent of employment) in each U.S. state.

16. The regression results are presented in Table 3.

Robust standard errors in parentheses with ***, **, and * indicating significance level at 1 percent, 5 percent, and 10 percent, respectively.

Robust standard errors in parentheses with ***, **, and * indicating significance level at 1 percent, 5 percent, and 10 percent, respectively.

17. Key empirical findings in this chapter are as follows.

18. The Canadian authorities’ renewed efforts to boost labor productivity are welcome. The authorities are rightly focusing on measures to enhance innovation activity, given that spending on R&D and the density of industrial robots in Canada are much lower than top performers in OECD economies.

19. But more can be done to enhance investment, innovation, and the diffusion of new technologies.

The 2013 questionnaire contains around 1,400 questions on economy-wide or industry-specific regulatory provisions. A bit more than 700 of the questions are used to compute the economy-wide PMR indicator and the NMR indicators on sector regulation.5 All of these questions are closed questions that can either be answered with numerical values (e.g. the number of bodies that need to be contacted to start a business) or by selecting an answer from a pre-defined set of menu (e.g. the question whether a specific regulation exists can be answered with ‘yes’ or ‘no’). The qualitative information is transformed into quantitative information by assigning a numerical value to each possible response to a given question The coded information is normalized over a zero to six scale, where a lower value reflects a more competition-friendly regulatory stance.

The 2013 questionnaire contains around 1,400 questions on economy-wide or industry-specific regulatory provisions. A bit more than 700 of the questions are used to compute the economy-wide PMR indicator and the NMR indicators on sector regulation.5 All of these questions are closed questions that can either be answered with numerical values (e.g. the number of bodies that need to be contacted to start a business) or by selecting an answer from a pre-defined set of menu (e.g. the question whether a specific regulation exists can be answered with ‘yes’ or ‘no’). The qualitative information is transformed into quantitative information by assigning a numerical value to each possible response to a given question The coded information is normalized over a zero to six scale, where a lower value reflects a more competition-friendly regulatory stance.

Aggregate productivity growth can be decomposed into growth of sectoral productivity, and gains from the reallocation of labor resource across sectors (Fagerberg, 2000 and Andersson, 2006).

where sjt is the employment share of sector j at time t; labor productivity LPt is defined as gross value added per total hours worked (excluding the public sector).

For both Canada and the U.S., we decompose aggregate productivity growth into key 6 sectors: agriculture, forestry, fishing, and hunting; mining, quarrying, and oil and gas; manufacturing; construction; utilities; and other sectors including services.

In this chapter, unless otherwise indicated, labor productivity is measured as output per total hours worked.

There are many other channels to explain labor productivity. For example, using Canadian provincial data, Petersson et al (2017) present empirical evidence that an increase in female labor force participation is positively associated with labor productivity growth. Ishi and Mariscal (forthcoming) present some evidence that public investment in infrastructure could boost economic growth and complement private investment.

Our focus on firms’ productivity and markups is in part motivated by some growing concerns that there are not so many globally competitive firms in Canada. For example, in the list of Fortune 500 (2017), only 11 Canadian firms made it to the list, of which 6 companies are from the financial or the energy sector. Many also argued that Canada’s cooperate sector is dominated by small-and medium-sized enterprises, which are less competitive and less capital intensive than big firms (Canadian Chamber of Commerce, 2016).

See Cao et al (2017) and St-Amant, P., and D. Tessier (2018). Possible factors discussed in the literature are: increased industrial concentration, like the entry of a big retailer such as Walmart, which operates on a large and increasing scale, discouraging new entry; and less interest in entrepreneurship among highly educated young people.

They estimated that two-thirds of the decline in Canada’s share of the U.S. non-energy import market (between 2002 and 2014) is attributable to reduced competitiveness, and 16 percent of the decline is attributable to changes in the composition of U.S. import demand. By sector, almost three-quarters of Canada’s total loss in market share was concentrated in two sectors: motor vehicles and parts (reflecting a reduction in U.S. demand for large cars) and forestry products and building and packaging materials (reflecting the collapse in the U.S. housing market).

Entrants and incumbents can create new products and displace the products of competitors. How exactly the process of innovation works has been much debated since Schumpeter (1939). Most recently, Acemoglu et al (2017) argue that policies to encourage exit of less productive firms would help free up resources and improve economic growth and welfare. In contrast, Gracia-Macia, Hsieh, and Klenow (2018) show that innovation comes more from incumbents, using U.S. firm-level data.

Trade and productivity linkages could arise through several channels. For example, Keller (2000) stresses the technology diffusion channel through intermediate goods imports from technological leaders, while Blalock and Veloso (2007) present evidence that vertical supply relationships are the channel through which import-driven technology transfer occurs. Bloom, Draca, and Reenen (2016) also show some evidence of import competition and technical advancement.

Note that our GMM models do not fully take account of endogeneity problems arising from omitted variables. For example, Canada’s labor productivity could rise due to an increase in more competitive US imports, leading to exits of less productive Canadian firms. 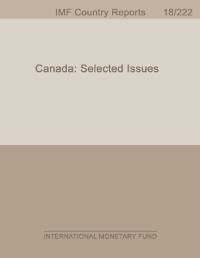 (Percent share in the US market, three-quarter moving average)

(Number of multiple industrial robots per 10,000 employees in manufacturing industry) 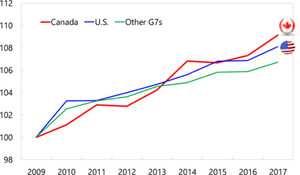 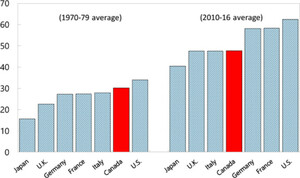 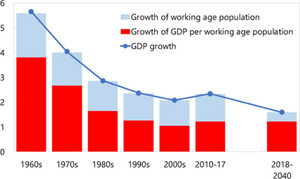 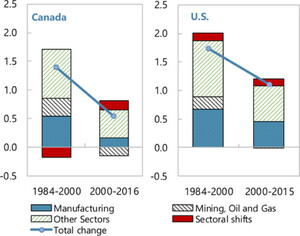 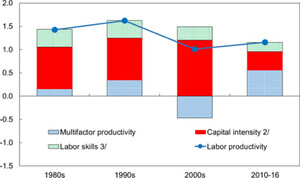 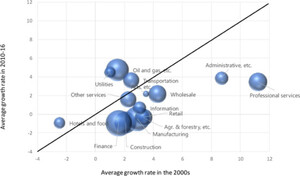 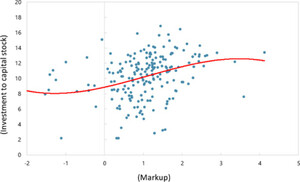 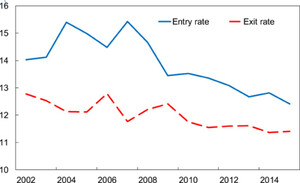 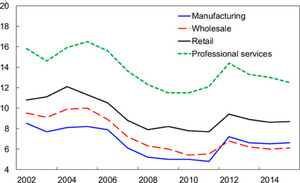 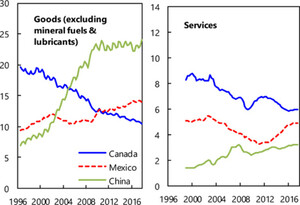 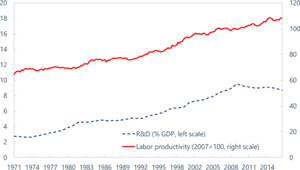 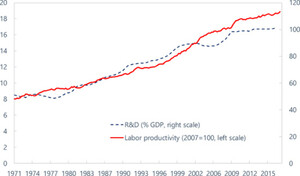 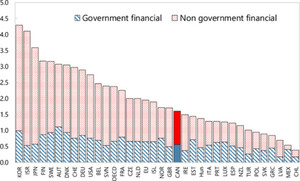 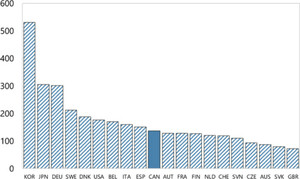