A dynamic stochastic general equilibrium (DSGE) model tailored to the Thai economy is used to explore the performance of alternative monetary and macroprudential policy rules when faced with shocks that directly impact the financial cycle. In this context, the model shows that a monetary policy focused on its traditional inflation and output objectives accompanied by a well targeted counter-cyclical macroprudential policy yields better macroeconomic outcomes than a lean-against-the-wind monetary policy rule under a wide range of assumptions.

1. A key objective of the Thai monetary authorities is to lift inflation back to target without unduly stimulating household debt and housing prices. Over the last decade, Thailand has seen a significant increase in household debt (Figure 1). At the same time, low interest rates in advanced economies and a strong external position have contributed to exchange rate appreciation and a drop in the inflation rate below the target range. Even though growth in household debt in percent of GDP started declining and interest rates in advanced economies began rising, the level of household debt remains high and inflation continues to show weak dynamics.

2. Macroprudential measures can be a useful complement to monetary policy in addressing potential pockets of vulnerability to financial stability. While monetary policy provides only one instrument (interest rate), counter-cyclical macroprudential tools could provide a useful complement, especially when real and financial cycles do not coincide. The Thai authorities already implemented three main macroprudential measures: (i) limits on loan-to-value ratio in the property market, (ii) limits on credit card and personal loans, and (iii) dynamic loan loss provisioning.2 Recent empirical studies suggest that some of these measures have been effective in stabilizing credit cycles.3 However, it remains an open question which type of policy combination of monetary and macroprudential policies would be most effective in dealing with both real and financial cycles. For instance, there have been active debates on whether monetary policy should address financial stability or focus on inflation and output stability. The type of macroprudential policy measures could also make a substantial difference in the outcome of its combination with monetary policy.

3. Using a DSGE model tailored to the Thai economy, this paper sheds light on the following issues: (i) the combination of monetary and macroprudential policies that would be most effective for Thailand in dealing with both real and financial cycles; and (ii) the appropriate choice of macroprudential tool in such policy combination.

B. Model Features and Key Assumptions

4. The joint effects of monetary and macroprudential policies are assessed using an open-economy DSGE model. The analysis aims to explore various conditions under which the use of macroprudential measures can (or cannot) improve macroeconomic outcomes within a plausible (including counterfactual) range of parameters and assumptions. Since there are a growing number of DSGE models that incorporate macroprudential measures in a variety of ways and different models focus on different aspects of financial frictions and economic environment (Box 1), choosing a relevant model and tailoring it to the current context of the Thai economy is crucial. It is also important to note that quantitative implications may be highly dependent on model specifications and calibrations.

5. To tailor to the Thai economy, the model incorporates a fully specified banking sector, household and corporate debt, and external borrowing.4 It is based on a New Keynesian DSGE model for small open economies with price rigidities and financial frictions. Under these frictions, inflation stability and financial stability improve welfare. The banking sector, which intermediates funds from patient households to impatient households and entrepreneurs, plays a crucial role for policy transmission.5 The brief descriptions of private economic agents, namely households, entrepreneurs, and banks, are as follows (Figure 2 depicts the relationships between agents in this economy).

6. Monetary and macroprudential policies are described by policy reaction functions. Two separate policy functions are incorporated: one for the monetary policy interest rate that follows a Taylor rule; and the other for a macroprudential policy measure, specifically either a cap on household loan-to-value (LTV) ratio or a minimum bank capital adequacy ratio (CAR). For each policy reaction function, we consider two variants. The two variants of the Taylor rule are as follows:

a. Standard Taylor rule—focused on inflation and output gap

b. Modified Taylor rule—focused on inflation, output, and credit gaps

where credit gap is the difference between the actual stock of household credit and its steady-state level.7

The two variants for a macroprudential measure are as follows:

9. A similar result is obtained in the case of a positive housing demand shock (Figure 4). With the counter-cyclical LTV rule, the growth of housing loans is contained without raising the nominal interest rate. By contrast, raising the interest rate following the modified Taylor rule causes a substantial decline in inflation and output while insufficiently containing growth in housing loans.

10. The above results are robust to a wide range of parameter values. For instance, when inflation is less sensitive to output volatility (i.e., the slope of Philips Curve is flatter) compared with the benchmark model, the performance of the modified Taylor rule in terms of stabilizing inflation gets closer to, but does not get better than, that of the counter-cyclical LTV rule. This implies that the limited effectiveness of monetary policy on inflation does not necessarily justify the reaction of monetary policy to financial stability concerns. Similarly, some impairment of the monetary policy transmission in the banking sector (e.g., lower pass-through to the loan interest rate) does not change the result that the counter-cyclical LTV rule performs better than the modified Taylor rule.

12. The above findings should be interpreted in context. As noted above, targeted macroprudential measures may not always be available. A number of factors may limit availability, such as reliable data, resources for implementation, and jurisdictional constraints. At the same time, cases of weak effectiveness or leakage of macroprudential measures are relatively uncertain and untested. It is also important to note that different types of shocks from those considered above— shocks to the world interest rate and domestic housing demand—may change the above conclusion.

13. Targeted macroprudential measures can provide a useful complement to monetary policy in the current context of the Thai economy. Active use of targeted macroprudential measures, to the extent it is available, is likely to achieve better macroeconomic outcomes by allowing monetary policy to focus on inflation and output stabilization while effectively containing financial risks from rising housing loans.

Monetary policy rules that react to financial stability concerns have been studied extensively in recent DSGE models. Standard monetary policy rules that react to inflation and output could lead to growing financial risks under financial frictions (such as collateral borrowing constraints), in which case a monetary policy that also targets financial stability by “leaning against the wind” could be welfare improving. DSGE models compare this benefit with the cost from short-term deviations from inflation and output targets and the corresponding welfare losses. While some models strongly support the case for leaning against the wind (e.g., Gambacorta and Signoretti 2014), other models show that the implied deviations from standard policy rules are quantitatively small (e.g., Curdia and Woodford 2010). Moreover, the case for leaning against the wind may be even weaker in small open economies, where the impact of such policy on international capital flows may exacerbate macroeconomic and financial stability concerns.

Bank of Thailand (2017) provides an overview of Thailand’s macroprudential framework.

Pongsaparn et al. (2017) shows that the Bank of Thailand’s measures on LTV ratio have been effective in moderating housing credit growth. In the global context, a cross-country panel regression analysis of the effects of macroprudential measures on household credit growth across advanced and emerging market economies, including Thailand, is reported in the October 2017 GFSR Chapter 2, Box 2.5 (IMF, 2017).

The framework of Anand, Delloro, and Peiris (2014) is extended to incorporate housing sector and household debt, following Gerali et al. (2010). Details of the model will be explained in the forthcoming working paper.

The banking sector in the model encompasses all types of financial intermediaries (including Specialized Financial Institutions) and does not distinguish different mandates and business models among them.

“Impatient households” can also be interpreted as liquidity-constrained households in this model.

Using some alternative financial gaps, including a house price gap, does not change the results substantively.

Another possible combination of policy rules, namely a modified Taylor rule with a counter-cyclical LTV rule, is examined in Corbacho et al. (2018). Its outcomes fall in the middle of those of (ii) and (iii).

For illustrative purpose, we set some large values to the parameters of the policy responses to credit gaps in the counter-cyclical LTV rule and the modified Taylor rule. 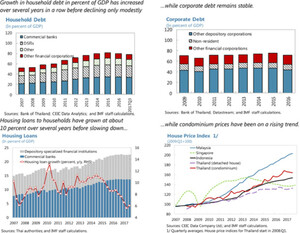 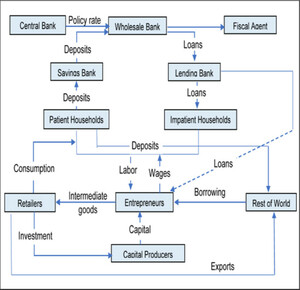 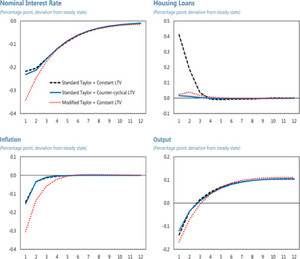 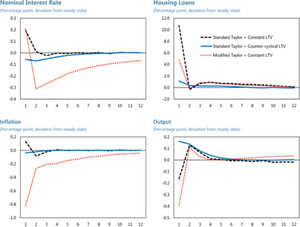