Financial Benchmarking of the Gambia1

Although The Gambia has significantly developed its financial sector over the past decade, there are areas of financial inclusion, depth and efficiency requiring continued improvement. In the near term, efforts should focus on sustainable private credit expansion facilitated by strengthened risk management, promotion of healthy financial competition and a conducive business environment. However, it is essential that private credit growth is gradual without weakening credit underwriting standards and commensurate with current economic activities to prevent any financial stability concerns from future NPLs. To fully reap the economic benefits of financial development, policy priorities should also be given to strengthening the supervisory and regulatory framework and financial infrastructure, supporting also financial innovations, and improve financial literacy to support financial access.

1. The Gambia’s financial sector is dominated by banks albeit with a significant presence of non-bank financial institutions (NBFIs). The sector is generally shallow and underdeveloped with no capital market. It comprises mainly banks, insurance companies, microfinance institutions, village savings & credit associations (VISACAs), credit unions and a state pension fund 2 (Table 1). The banking industry comprises 11 commercial banks and one Islamic bank. Although all banks are domestically-incorporated, eight of them are foreign subsidiaries of mainly Nigerian origin. One of the four domestically-owned banks (Mega Bank) is under the Central Bank of the Gambia’s (CBG) recovery and resolution procedures.

Financial System Size and Ownership in 2017

Financial System Size and Ownership in 2017

Source: CBG and IMF Staff Computations. NB: Share of assets excludes VISACAs and Credit Unions due to lack of data

2. The banking system accounts for more than 80 percent of total financial assets of the financial sector and is itself highly concentrated (Figure 1). Four of the twelve banks 3 (based on assets size) are domestically systemically important banks (D-SIBs) and jointly account for about 69 percent of industry total assets and 74 percent of all deposits. Overall, the banking industry holds around 77 percent of all outstanding sovereign assets, and at least 41 percent (GMD 14.7 billion) of the industry’s assets are short-term government securities–mainly T-bills. This exposure is in addition to GMD 297.7 million in credit to the central and local governments, and public enterprises. Government’s heavy reliance on the T-bill market stems from protracted fiscal imbalances due to ballooning public expenditures, a low revenue base, and fiscal bailouts of struggling state owned enterprises (SOEs).

B. Literature Review on Financial Development, Inclusion and Deepening

5. The paper uses statistical benchmarking to assess The Gambia’s financial sector development relative to peer countries and over time. It employs the FinStats financial indicator tool, which provides a standardized quantile methodology to benchmark and compare countries’ financial sectors. The quantile regression allows for more meaningful cross-country comparisons by controlling for the level of economic development, and other key structural, and country-specific factors. For each of the indicators referenced above, there are four sets of benchmarks of financial performance provided: (i) regional benchmarks, (ii) income group benchmarks, (iii) peer group country averages, and (iv) statistical benchmarks, including the expected median and expected 25th and 75th percentiles. Deviations from the statistical benchmark are indicative of the quality/effectiveness of policy. FinStats data for the peer country comparison spans 10 years from 2006 to 2015.

6. Despite its low level of financial development, The Gambia performs relatively well with respect to key access indicators at the national level (Figure 2). For instance, the country has a good level of financial access measured by indicators such as number of bank accounts per 1000 adults or number of bank branches per 100,000 adults. This was helped by the rapid rise in branch expansion in the last decade, with the number of banks doubling from seven in 2006 to fourteen in 2010. The period also coincided with the influx of new banks—partly due to the country’s aggressive policy of attracting foreign direct investment (FDI) at the time, partly due to increased competition among banks elsewhere in West Africa. Branch density stagnated from 2011 onwards, due in part to the exit of two banks 4 and a weaker macroeconomic performance. However, notwithstanding recent gains in financial access, there is still significant room for improvement when it comes to the geographic dispersion of the financial institutions network. For instance, while 80 of the banking industry’s 87 branches are clustered in the Kanifing, Banjul, West Coast and the North Bank regions of the country, there are only four bank branches in the Upper River Region, one in the Lower River Region and no bank presence in the Central River Region. Similarly, with the exception of the North Bank and the Upper River regions which each have two ATM machines, 96 percent of the country’s 99 ATM machines are found within the Banjul, Kanifing and West Coast regions.

7. A comparison with the peer SSA and LIC countries also shows that The Gambia financial services coverage has surpassed many regional peers except with respect to private credit provision. The Gambia remains in the upper half of the rankings when benchmarked against SSA and LIC countries. Similar results were observed when benchmarked against other West African Monetary Zone (WAMZ) member countries in terms of number of branches per 100,000 adults. Moreover, it only lagged behind Ghana when assessed for the number of accounts per 1000 adults. A quantile regression analysis used to control for outliers in the data and the influence of non-policy related structural differences such as economic and demographic factors also shows similar performance (Figure 2). Notwithstanding, the country lags behind all its regional peers when assessed for financial inclusion based on percentage of firms with credit lines largely reflecting the crowding out effects of fiscal dominance.

8. Efforts to improve financial deepening in The Gambia have stalled primarily due to fiscal crowding out and structural issues (Figure 3). The growing need for fiscal financing has led to a decline in private sector credit from 17.4 percent of GDP in 2011 to 12.8 percent of GDP in 2015, including by pushing up average lending rates to a high of around 28 percent in 2016. This has pushed the country’s performance with respect to private sector credit below the average for LICs and below its expected median (using the quantile regressions, after controlling for outliers in the data and the influence of non-policy related structural differences). Similarly, the performance of NBFIs, as indicated by insurance company assets-to-GDP ratio, trails the average for SSA, and the quantile regression shows that more recently the ratio was in line with the expected median through 2013 and then declined to the 25th percentile by 2015. By contrast, the country performs much better when financial depth was assessed based on the bank deposits-to-GDP ratio. The country’s score was above the regional average, the average for peer countries and its own expected median. While this very high ratio depicts good financial depth, it may also reflect limited alternative investment opportunities.

9. The structure of banks’ balance sheets is also holding back financial deepening. The industry’s liabilities are almost entirely short-term, which helps to explain the lack of appetite for long-term financing to avoid large maturity mismatches. Beyond this, difficulties in contract enforcement and foreclosures, software problems affecting both the credit referencing platform and the collateral registry, are a few of the structural problems that have an adverse impact on financial deepening.

10. The banking industry’s Return on Assets (ROA) and Return on Equity (ROE) suggests good performance which, however, is vulnerable to lower T-bill rates. The country’s performance as indicated by these two indicators (Figure 4), surpassed the regional average for SSA and its peers in the WAMZ region and those in the low-income bracket. However, this seemingly good performance also reflects the high level of T-bill interest rates and high dependence of the banking sector on low-risk, high-yielding sovereign assets in recent years. Lower government borrowing needs and declining T-bill rates will likely put pressure on profitability indicators

11. Financial development facilitates efficient resource allocation and promotes economic growth (Acemoglu and Zilibotti 1997). Moreover, recent analytical work has shown that there is significant scope for financial development to contribute to the new government’s drive to enhance inclusive growth. However, in order to achieve this objective, concrete efforts must be taken to address structural and policy challenges affecting the financial system as a whole. In addition to the policy recommendations in the previous section, the following could be considered:

Oceanic Bank exited the market in 2012 followed by Prime Bank in 2013.

Financial Inclusion in The Gambia

Financial Deepening in The Gambia

Financial Efficiency in The Gambia 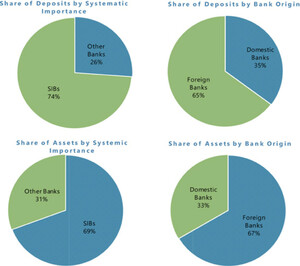 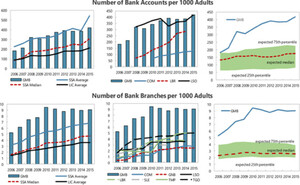 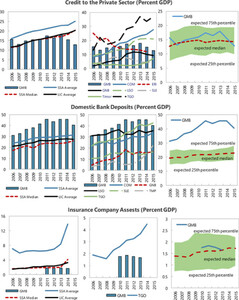 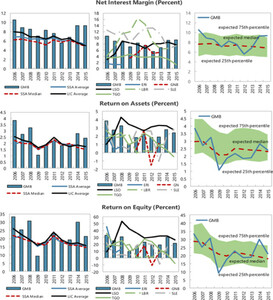