1. The Iranian government is seeking to develop the domestic bond market under the Sixth National Development Plan (NDP). It established the DMO in 2015 which compiled data on the government’s arrears, and increased the size and pace of issuance of government securities to clear arrears and finance the budget deficit. The on-going audit of arrears has revealed government arrears of about 30 percent of GDP which brought the debt-to-GDP ratio to near 50 percent in 2016/17. The audit shows that the central government’s (CG) arrears are owed to banks, private contractors, and social security institutions.

3. Faster development of the government securities market would help overcome Iran’s limited access to international capital markets and lower its recourse to monetary financing of the budget. A mature securities market could offer a wide range of instruments to fund the government deficit.2 It would provide a benchmark yield curve, and reduce the need for direct and inflationary monetary financing of fiscal deficits. It can also strengthen the transmission and implementation of monetary policy.

B. Government Securities Issuances in Iran

4. Following the establishment of the DMO,3 government securities issuance has gained pace. The first government Sukuk issuance in the form of Al-ljara (rent) was in 2015 and Morabaha (cost-plus) Sukuk in 2016. These securities carry maturities of two to five years and their return/profit is set around 20 percent. The Planning and Budget Organization (PBO) provides the guarantee for repayment through budget resources. The government has issued Participation Papers (Musharakah) since 1997 to finance projects and procure raw materials.

5. Islamic Treasury Bills (ITBs) comprise the largest share in government securities issued. The MOEF started to issue ITBs in 2015 to clear the government’s arrears to its contractors. ITBs are zero-coupon securities, sold at a discount from face value. The contractors sell the ITBs they receive from the government at the bond market established in Iran Fara Bourse (IFB). ITBs carry maturities of 4 months, 6 months or 1-year. The average maturity of borrowing has declined as issuance of ITBs gained pace. The government also issues settlement papers for off-setting tax obligations and expenditure arrears between the government and contractors.4 To date, the government has issued ITBs that cover 4.6 percent of total stock of arrears.

6. Iran’s Law on Issuance of Participation Papers (1997), Law on Facilitating Competitive Production and Improvement of Financial System (LFCPIFS, 2015), and annual budget laws provide the legal basis for government securities issuances. The issuance of securities is done under the supervision of a Sharia committee which is a high-rank board in the Securities and Exchanges Organization (SEO).

C. Development of an Efficient Government Securities Market in Iran

8. Macroeconomic and financial stability will be critical to build an efficient government securities market in Iran. Lack of access to international markets and a paucity of institutional investors could hamper the development of an efficient market. Volatility in growth and inflation, strong liquidity growth, and lack of a market-based monetary policy, will have to be addressed to build investor confidence.

9. Some basic pillars will have to put in place to develop an efficient and liquid primary and secondary government securities market:5 (i) a solid legal framework; (ii) a clear and transparent debt management and execution strategy that provides clarity and predictability; (iii) well-functioning systems for trading, clearing, custody, payment, and settlement; (iv) a well-designed market based monetary policy; (v) non-distortionary taxation of financial instruments; (vi) efficient and market-based sales methods, and; (vii) a diverse investor base, i.e., a combination of banks and institutional investors, both domestic and international.

10. The borrowing authority for government should be issued solely to the MOEF. This would strengthen control over debt, provide clarity to market participants, reduce the cost of borrowing for the government and improve treasury management.6 A public debt law identifying the MOEF as the sole issuer of government debt and setting out the necessary governance, audit, reporting and accountability processes would provide potential investors greater legal clarity and improve transparency. The law should require the government to develop and publish a debt management strategy, prepare an annual report on its debt management activities, and report on its debt and asset position. This would make the government’s objectives clearer to investors and provide the data necessary for investors to assess and be assured of the government’s capacity to repay its debt obligations in a timely manner. The MOEF is preparing a draft public debt law and has requested IMF TA assistance.7

11. A sound debt management strategy (DMS) is key to the sustainable and efficient management of public debt. A DMS is a plan for the evolution of the public debt portfolio that operationalizes the debt management objectives given the constraints, and specifically the government’s preferences with regard to cost-risk trade-offs.8 The currency composition of the public debt portfolio is also a channel through which external shocks can impact the fiscus. For example, in Argentina, Brazil, Indonesia and Russia exchange rate depreciation led to a sudden rise in public debt.9 In other cases, the realization of large off-budget arrears and or contingent liabilities led to steep jumps in government debt. In other countries increased reliance on short-term debt came at cost of increased vulnerability to rollover risk when debt came due. Such experiences highlight the importance of developing effective debt management strategies to mitigate such risks.

12. The authorities should develop a DMS and make it public to help build investor trust and ultimately lower borrowing costs. Although the annual budget laws provide a ceiling for types of securities to be issued, there is no pre-announced issuance calendar, debt statistics are not published, and the objectives of debt management are not clearly defined nor publicly disclosed. A DMS that defines the scope of debt management with an emphasis on the preferred risk profile of the debt portfolio would aid debt market development. The strategy could review the instruments available for issue, set targets for the pace of securitization of arrears, a minimum average maturity/duration for debt and maximum share of short-term to long-term debt, currency composition, and interest rate structure (fixed vs floating). A strategy proposal prepared by the DMO should be discussed with the CBI and the PBO to ensure greater coordination between monetary and fiscal policies. Once approved, the strategy should be made public and reviewed at least annually.

14. As part of its annual borrowing and debt program the authorities need to develop a clear strategy to securitize the remaining arrears. The plan would communicate to stakeholders the government’s plan, timetable, and criteria for the liquidation of arrears, thereby providing private contractors greater certainty about payment prospects and assure contractors all that selection of creditors to be paid is determined according to clearly understood criteria.10

15. Iran has a well-functioning securities settlement infrastructure. The accounts for the securities are automated, the custody arrangements for the recording of securities ownership remain under the IFB, and the settlement system allows for T+1 settlement with delivery versus payment arrangement. Electronic platforms work to lower the cost, eliminate delays in trading and settlement and help protect against theft or forgery. IFB provides efficient and low-risk settlement facilities. From the market supervision perspective, the current system provides comprehensive, timely, and reliable information on holders of government securities and on trading developments. It also allows the government to introduce an efficient tax system on securities, if the government chooses to introduce one. The IFB also acts as the central depository. The depository facility at IFB has the ability settle forward trading and repurchase agreements as two successive spot deals. The market is supervised by SEO.

17. A market-based monetary policy framework would improve the effectiveness of monetary policy and aid the development of the money and the securities markets. (see IMF Country Paper No. 17/63). Replacing the directed credit target and interest rate caps with a market based framework that sees the CBI policy rate consistent with the CBI’s inflation target and the funding of healthy banks at the CBI’s policy rate against collateral would help foster a deeper money market. The sizable offset operation proposed in the 2018/19 budget, under which government debt to contractors will be offset against the outstanding debt of banks to the CBI, could provide the CBI securities that would enable it to conduct open market operations. Therefore, it is essential that the government securitizes its debt to the CBI with tradable securities bearing market interest rates. In addition, the securitization of government’s arrears and the recapitalization of financial system through issuance of government bonds would provide the financial institutions with high quality collateral to access the CBI’s liquidity facilities. These, in turn, would provide the securities market with much needed liquidity for its development.

Issuance Techniques for Government Securities and Diversifying the Investor Base

20. The DMO should consider using competitive price auctions as its main distribution channel for selling government securities. Currently, state banks conduct sukuk sales on behalf of the government in the IFB securities market. The price of the securities is fixed and the state banks collect bids for amounts. The process can last for a week, on occasion, to reach the intended sales amount. A syndication of banks issues the securities, the banks receive a fee but they do not underwrite the sales. The securities remain on sale with fixed prices for a period. While this methodology could be appropriate for relatively small and infrequent issuances, the government will need to borrow from the markets more frequently and in bigger amounts to fund its deficit and competitive price bidding auctions could better meet its cost objectives.

21. In the medium-term, the authorities could consider reopening previously issued securities to build benchmark issues to enhance market liquidity. This would reduce the liquidity risk premia in the yields of government securities. To avoid refinancing risks with building benchmark issues, spreading the maturity profile across the yield curve, buybacks, exchanges, or switches of older issues with new issues can be used.

22. Currently the investor base in government securities is not very diversified. According to the IFB, about 80 percent of the bonds are held by Asset Management Companies that are owned by local banks. Banks hold only a small portion of bonds in their own balance sheets. Foreign ownership is about 10 percent, and the remainder is held by individuals and corporates. The implementation of the pension reform (see IMF Country Paper 18/xx, Box 3) could make pension funds important investors in the government securities markets in the medium-term.

24. To ensure investor diversity and sustained demand at treasury auctions, the authorities could target inclusion in the international bond indices in the long-run. This would require (i) local bonds to be traded on an international clearing house; (ii) a certain size for a single bond issuance in local currency; (iii) existence of primary dealers to ensure liquidity and consistent bid/ask spreads; (iv) market liquidity to reach certain level of transaction volume.

The DMO is a Center reporting to the Minister of Economic Affairs and Finance. The Minister has delegated day-today management to the Treasurer General, to whom the Head of DMO reports. DMO has 45 staff and back-mid-front office functions are in place. 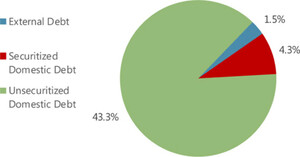 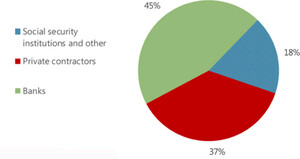