This Technical Assistance Report discusses the findings and recommendations made by the IMF mission about compilation and dissemination of government finance statistics (GFS) in Rwanda. The mission reviewed the roadmap of the interagency GFS technical working group, the structure of the public sector, the GFS compilation process, and the conversion of source data to standard fiscal tables consistent with international standards. The mission fully endorsed the authorities’ work program going forward, and agreed that the step-by-step approach starting with producing solid and credible budgetary central government data. The mission cautioned that increasing frequency and expanding coverage of fiscal reports to include the local government sector and, eventually, the extrabudgetary units, will need to be an iterative process requiring continued determined efforts.

This Technical Assistance Report discusses the findings and recommendations made by the IMF mission about compilation and dissemination of government finance statistics (GFS) in Rwanda. The mission reviewed the roadmap of the interagency GFS technical working group, the structure of the public sector, the GFS compilation process, and the conversion of source data to standard fiscal tables consistent with international standards. The mission fully endorsed the authorities’ work program going forward, and agreed that the step-by-step approach starting with producing solid and credible budgetary central government data. The mission cautioned that increasing frequency and expanding coverage of fiscal reports to include the local government sector and, eventually, the extrabudgetary units, will need to be an iterative process requiring continued determined efforts.

The mission strongly welcomes the recent establishment of a formal interagency GFS technical working group and the development of a detailed roadmap based on the EAC fiscal data development (GFSM 2014 implementation) plan. Timely implementation of the roadmap will enable Rwanda to meet ahead of time the fiscal and debt statistics requirement associated with the East African Monetary Union protocol. The broader coverage, increased frequency, and consistency of fiscal and debt data with international standards should help facilitate policy making, monitoring fiscal risks and attaining the Special Data Dissemination Standard.

The authorities’ ambition to automate GFS compilation to produce uniform, timely, comprehensive, and comparable data in the near future is commendable. The recent progress on improving source data—the expansion of the electronic budget execution system (Integrated Financial Management Information System) to cover all budgetary and local government (LG) transactions and the implementation of a GFSM 2014-consistent Chart of Accounts to be used by all government units—makes the authorities’ objective feasible yet ambitious. Achieving this objective will require determined government efforts and a close TA engagement.

Jointly with the authorities, the mission reviewed the roadmap of the interagency GFS technical working group, the structure of the public sector, the GFS compilation process, and the conversion of source data to standard fiscal tables consistent with international standards. The mission fully endorsed the authorities’ work program going forward, and agreed that the step-by-step approach starting with producing solid and credible budgetary central government data. The mission cautioned that increasing frequency and expanding coverage of fiscal reports to include the LG sector and, eventually, the extrabudgetary units (EBU), will need to be an iterative process requiring continued determined efforts. To complete this phase of the TA efforts, trial runs of the bridge table with budgetary central government source data would be required. This process could then be expanded to include the LG sector and the EBU, to eventually produce trial general government data.

The mission’s main recommendations are as follows:

The mission would like to thank the authorities for their hospitality and support, which contributed greatly to the success of the missions.

2. The overall objective of the missions was to review Rwanda’s compilation and dissemination of GFS and provide recommendations for improvement to align current practices with the Government Finance Statistics Manual 2014 (GFSM 2014)2 analytical framework, and provide GFS training to counterpart staff. The specific tasks included

4. The key legislation concerning the budget is the Organic Law on State Finances and Property (Law No. 12/2013, issued on 12/09/13), which sets out the financial regulations to be followed by government units. The law establishes the principles and modalities to be observed in the planning, execution, monitoring, and reporting of the budget. It assigns to the minister in charge of finance the responsibility for carrying out the provisions of the law.

5. In particular, the law “establishes principles and modalities for sound management of State finances and property” and “relates to public financial management of Central Government, local administration, public institutions, and parastatal organizations.” Article 63 of the law also states that “the Accountant General shall be responsible for monitoring and coordinating accounting activities and for setting and promoting compliance with the accounting and financial reporting standards applicable to public entities.”

8. The public corporations sector in Rwanda is composed of 12 public corporations. The classification of 9 of these enterprises seems to follow the sectoring guidelines of the GFSM 2014, as the majority are government owned institutional units, and their operation is based on market prices. The Military Medical Insurance (MMI) and the Rwanda Social Security Board (RSSB) should be classified in line with the draft regional GFS guidelines, as social security funds and part of general government. Also, the Rwanda Utilities and Regulatory Agency (RURA) should be reclassified in the general government as it mainly provides licenses to perform activities such as internet provision and motorbikes and taxi licenses in exchange for fees. These classifications would align Rwanda’s fiscal statistics with international standards.

9. The coverage of the Integrated Financial Management Information System (IFMIS) has recently been expanded and now broadly covers all BCG and LG revenue and expenditure, with some notable exceptions. In particular, tax and non-tax revenue from the Rwanda Revenue Authority (RRA), and inflows from external grants and project loans are not covered by IFMIS. EBUs and the social security funds are also not recorded in IFMIS, except for transfers received from the central government.

11. There are two sources of revenue: tax and non-tax revenue (both types are recorded on a cash basis). The RRA collects all taxes and uses their own system to record information. This system (which divides domestic and external tax revenue) is not yet included in IFMIS, but the RRA has introduced a classification which is the same as the Chart of Accounts (CoA) of the BCG, so the mapping table developed by the mission can be used. On the other hand, it is important to recall that the RRA also collects taxes on behalf of the LG, so the proper reassignment has to be applied to consider such income as revenue of the LG and not of the BGG.

12. One of the pending tasks for the compilation of central and general government GFS data is the inclusion of EBUs. These units do not report in IFMIS and, while some use the same classification as the BCG CoA, others do not. For this reason, the Subcommittee on Compilation (SCO, see paragraph 20 in Section VI) has developed a set of reporting tables to be sent to such entities not reporting in IFMIS to gather common information on GFS. The mission has reviewed and helped the SCO to complete those reporting tables.

13. The authorities are working to improve statistical treatment of external grants and (concessional) project loans. Both types on external aid can be disbursed either as a direct payment to a third party such as a contractor, upon request from the government ministry or other institution that is an implementation unit, or as a cash transfer to the government. Information on cash transferred to government is easily obtained as deposits to a government account in the National Bank of Rwanda (BNR). However, this is not the case for cash disbursed directly to contractors, which cannot be directly tracked.

14. The Rwandese authorities are trying to improve recording of external grants with a more proactive attitude toward donors and the agencies in charge of project grants. The External Finance Unit collects information on all budgeted direct payments to contractors from donors and this information is included in the budget. For budget execution, information is collected from donors and from the agencies in charge of the projects and, where discrepancies exist, an adjustment to conciliate both figures is made. On the other hand, Single Project Implementation Units are being established in each ministry and it is expected that for the 2015/16 budget, they will introduce the information on the projects’ budget execution in IFMIS (which facilitate timely and more reliable yearly and quarterly information). However, a Single Project Implementation Unit has not been put in place for the Ministry of Infrastructure yet.

15. The new CoA was introduced in 2011/12 and covers most government units. The mission found the CoA is sufficiently detailed and broadly consistent with GFSM 2014, but that some items are not classified in line with the GFSM codes. A bridge table was therefore developed to fully map the CoA so consistent aggregates with the GFS methodology could be derived. The developed bridge table is shown in Appendix V.

16. The mission worked with the Rwandese authorities to develop a CoA-GFS mapping table that can be integrated into the IFMIS framework. This work is ongoing, and will enable GFS data to be directly obtained for all entities reporting in IFMIS. Procedures for updating the framework and regular reviews should also be established.

17. For entities not reporting in IFMIS such as the RRA and EBUs, a channel of timely sharing information should be established if they cannot be integrated into IFMIS. The same applies for external project grants and loans.

18. The budget CoA is sufficiently detailed for revenue and expense. However, when coming to transactions on assets and liabilities and the related stocks, this is not the case as some splits are not available. For this reason, the mission has worked with the Rwandese authorities to build a sufficiently detailed CoA for such items. The mission has left a draft proposal with the authorities, which should be fine-tuned. The CoA will then be revised and mapped by the mission.

19. Jointly with the authorities, the mission reviewed progress on the implementation of GFSM 2014 and agreed on a detailed timetable for gradually expanding the coverage and frequency of GFS in line with GFSM 2014. Implementation of the plan will ensure that Rwanda satisfies the fiscal data requirements associated with the East African Monetary Union.

21. Some of the tasks of the different subcommittees have been already implemented, such as the development of a road map for migration to a GFSM 2014 framework or the linkage of the CoA classifications with the corresponding GFSM 2014 economic classifications. There are other tasks which are foreseen to be implemented in the coming months, such as the mapping of historical series to the updated fiscal reporting framework, and the preparation and publishing of GFSM 2014-compliant fiscal and debt data.

22. The mission has reviewed and agreed with the Rwandese authorities on the technical working group’s roadmap. It was emphasized that GFS compilation is a step-by-step process, requiring determined efforts.

23. A training course was provided to staff of the Ministry of Finance and Economic Development, the RRA, and National Institute of Statistics Rwanda during July 21–24, 2014. The course had participants from all agencies and institutions involved in the compilation and dissemination of GFS. Due to the restructuring and enlargement of the GFS technical working group, a new GFS training course was requested by the authorities and will take place in July 6–10, 2015.

24. The mission will return as agreed during January 12–22, 2016 to take stock of progress on implementing the recommendations and provide further support for Rwanda’s fiscal data (GFSM 2014) development plan. Continued TA will focus on supporting efforts to improve the coverage, timeliness, and frequency of Rwanda’s GFS. The mission confirmed some of the planned activities, including Rwanda’s participation in the regional TA activities, and extended the program until January 2016 as depicted in Table 1: 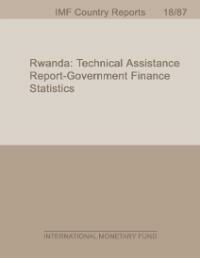 Institutional Structure of the Public Sector 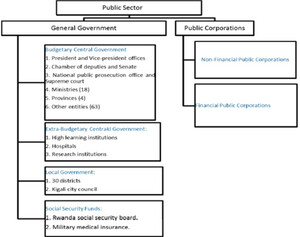 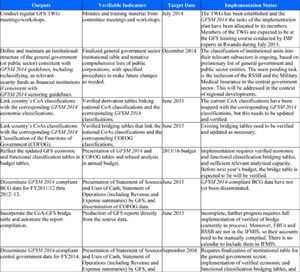 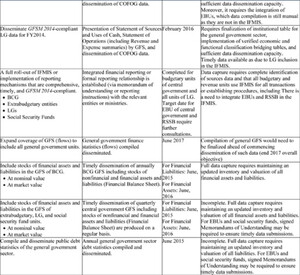