Gender inequality in Nigeria is high and widespread across areas of economic opportunities (enforcement of legal rights; access to education, health, financial services) and outcomes (labor force participation, entrepreneurship, political representation, income). These inequalities have led to substantial macroeconomic losses in terms of growth, income equality, and economic diversification. Nigeria’s real GDP per capita growth could, on average, be higher by 1¼ percentage points annually if gender inequality was reduced to that of peers in the region. Addressing challenges in health and education, such as by providing necessary infrastructure (sanitation facilities and electricity), equalizing legal rights, and combatting violence against women and girls, will be essential for Nigeria to reap the demographic dividend from its young and rapidly growing population.

2. With high and wide-spread gender inequality, Nigeria has therefore likely been missing out on a key ingredient to economic success. Global rankings have consistently placed Nigeria within groups of low performers in terms of gender equality, with opportunities for improvement in a wide range of areas.2 Among 144 countries, Nigeria ranks 122 on the World Economic Forum’s Gender Gap Index, with particularly low relative scores on educational attainment and political representation (both ranked 135). Nigeria is among the 10 percent of countries worldwide that exhibit the highest levels of gender discrimination according to the OECD’s Social Institutions and Gender Index, with an assessment of “high” or “very high” in all of the evaluated categories (discriminatory family code, restricted physical integrity, son bias, restricted resources and assets, restricted civil liberties). It also falls into the group of countries with highest gender inequality in human development outcomes (UNDP 2016).

4. Gender-responsive policies can help narrow gender gaps in health and education that would, in turn, decrease fertility rates. Gender responsive health policies, boosting education levels for girls, providing broader coverage of women by legal rights, and protecting them from violence will improve women’s health outcomes, and empower them economically and increase their productivity. Economic empowerment, in addition to fully meeting the demand for contraception and increasing the age of first child bearing by introducing and enforcing a national minimum age of marriage, can help decrease fertility rates. These policies could open up a virtuous cycle, since lower fertility rates, in turn, have been associated with higher education levels for girls, increased female labor force participation, and higher savings (Tertilt 2005; Bloom and others 2009).

5. This chapter argues for a level playing field, and does not take a normative stance on Nigeria’s social, cultural, or religious norms. It benchmarks Nigeria’s gender indicators against other countries, provides estimates of past economic losses attributable to gender inequality, and suggests policies that would address gender inequality while advancing the development agenda.

6. Economic participation by women in Nigeria does not significantly differ from that of peer countries; participation in politics and in higher-value activities does (Figure 3).

While some of the decisions by women not to participate in the economy may be preference-based, a range of obstacles prevent them to enter the economy to begin with, e.g. through constraints to human capital development (health, education), limits to access to productive resources (inheritance, financial access, legal rights, technology), and restrictions due to social attitudes and norms.

8. Gender gaps in education have narrowed but remain at higher levels and have increased at the tertiary level; infrastructure gaps appear to be an obstacle (Figure 4).

9. Health indicators have been improving more slowly than in the rest of sub-Saharan Africa (Figure 5).

10. Physical health is further impeded by a high prevalence of gender-based violence, that is rarely reported, reinforced by incomplete legal protection and attitudes towards violence (2013 Demographic and Health Survey).

11. Finally, there is a significant gender gap in financial access, although with some variation across demographic groups.

12. The above-mentioned trends raise the question to the extent of which gender inequality has harmed growth outcomes in Nigeria in the past.

14. The government and civil society organizations have initiated a number of programs to address the obstacles outlined above:

15. A necessary first step is to strengthen and enforce legal rights and national strategies to grant women the same economic opportunities, and raise awareness on existing rights. While laws and strategies will not be sufficient to decrease gender inequality—as underlying norms and behaviors shift more slowly—they are a necessary first step. Policy recommendations in this area are to:

16. Boosting infrastructure and human capital investment is essential to open a virtuous circle between increasing gender equality, higher productivity, and development. Measures in area include:

17. Reinvigorating previous efforts at gender-responsive budgeting would help prioritize actions towards more gender equality. In 2012, the Nigerian government, in partnership with the U.K.’s department for International Development, introduced “Growing Girls and Women in Nigeria” (G-WIN) as a gender budgeting initiative in 2012 (Stotsky and others 2016). This initiative that comprised the Ministries of Agriculture, Public Works, Health, Water Resources, and Communication and technology, should be restarted and expanded. Introducing a committee within the Ministry of Finance which monitors budget allocations and public expenditures from a gender standpoint and evaluates the impact of policies on women and men would be a welcome step, as would be additional training and empowering gender focal persons at relevant MDAs.

18. In line with the sustainable development goals, strengthening the provision of gender-disaggregated data is important to design actions and monitor progress in gender inclusion. For example, as noted in NBS (2016), limited information to women’s and men’s employment in the federal and state civil service inhibits an analysis of trends in public employment. More generally, gender disaggregated data should go beyond the disaggregation of male vs. female in main indicators but should offer information on opportunities, rights and resources. For example, the Ministry of Women and Child Protection could publish an overview of the current state of legal rights across federal states.

Prepared by Monique Newiak. This chapter has benefited from comments and inputs from the Ministry of Women Affairs and Social Development, the World Bank, the Gesellschaft für Internationale Zusammenarbeit, the Canadian High Commission to Nigeria, and several IMF colleagues.

Ratings used in this chapter provide point estimates that are subject to some uncertainty, they are indicative of Nigeria’s performance relative to other countries, rather than an absolute rating.

As the required index was not available from UNDP, this chapter reconstructed United Nation’s Gender Inequality Index line with UNDP (2014).

Inequality in the Labor Market 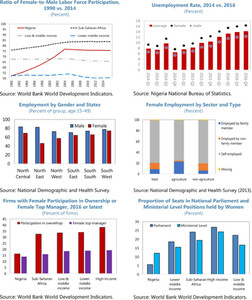 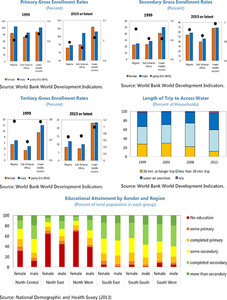 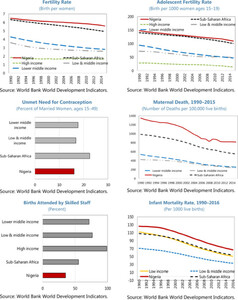 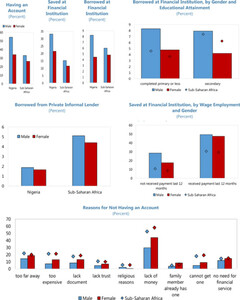 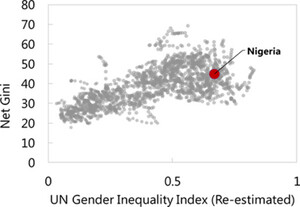