Income inequality and poverty rates are high in Nigeria, with the latter having declined more slowly compared to other countries. At the same time, moving closer to achieving the sustainable development goals and addressing Nigeria’s large development needs will require additional financing. This chapter finds that reforms to generate fiscal space—increases in value-added tax collection, excises, and electricity tariffs—are progressive, i.e. they reduce income inequality. However, they increase poverty gaps and rates to varying extents. Scaling up social safety net transfers and expanding their scope to cover a wider share of the poor can, to some extent, compensate for these adverse impacts at relatively low cost, and bring down poverty rates more generally. In the short term, other measures to shield vulnerable households’ income, including through lifeline electricity tariffs, and higher spending on health and education are needed.

1. Addressing Nigeria’s development needs and making progress towards the sustainable development goals will require fiscal space. Nigeria faces large development gaps (see section B). Increasing revenues and reducing non-priority recurrent expenditures would create room to address these challenges by allowing for: (i) an increase in public capital expenditures to narrow the infrastructure gap that is currently perceived as one of the main constraints to private sector-led growth and thus to employment and poverty reduction opportunities; (ii) a higher allocation of resources to health and education to build human capital—creating more equal opportunities across income groups; and (iii) expanding and scaling-up transfers through social safety nets—currently covering only a very small share of the population—that would lift a significant share of the population out of poverty.

2. Against this background, it is important to ensure that fiscal reforms to create fiscal space do not further worsen inequality and poverty. Sections D and E assess the welfare impact of the package of policy measures included in IMF staff recommendations and the authorities’ Economic Recovery and Growth Plan (ERGP). It simulates the impact of revenue measures—an increase in value-added tax (VAT) collection, and excises—and an increase in electricity tariffs on fiscal space, the poverty gap (average distance of the poor from the poverty line in percent of poverty line) and poverty headcount, as well as on income inequality. The results suggest that most measures are progressive (i.e. reduce income inequality) but increase poverty. The measures are estimated to generate significant revenue that allows for compensatory social transfers and an expansion of the social safety net more generally. As the results do not take into account the positive impact from increased expenditures on infrastructure and other development areas that can be unlocked by increased fiscal space, the simulated increases in poverty rates could be overstating the actual impact.

3. Poverty and income inequality remain high in Nigeria; economic growth has been less inclusive than in other sub-Saharan African countries. Latest published data for Nigeria show that:

5. To assess the distributional impact on households, this section assesses who is directly impacted by a policy change and to what extent.

6. Three main data sources help (i) identify who is affected by the proposed reforms, (ii) track transmissions of reforms through economic sectors, and (iii) scale revenues.

7. Combining household-level data with the information from the supply and use tables and fiscal accounts, this chapter then focuses on answering three main questions:

8. The literature on the distributive impact of VAT is mixed. While studies have shown VAT to be generally regressive (IMF 2017a), i.e. to increase income inequality, in advanced economies, the results for developing countries are more ambiguous (Bastagli and others 2012). More generally, VAT exemptions or lower rates on consumption items that constitute a larger share of the poor’s than the rich’s consumption basket, tend to be progressive. In the case of Nigeria, first evidence from plotting estimated VAT payments against household’s income percentiles, suggests that the share of VAT payments in higher-income households is larger—pointing towards a likely progressive impact from raising VAT revenue in Nigeria (Figure 5).

9. A VAT reform in Nigeria could generate significant fiscal revenue, reduce income inequality; but it would increase poverty. Figure 6 (panel1 and 2) describe the impact on revenues and different measures of poverty and inequality from 6 scenarios that combine increases in VAT rates and compliance rates. Without compensating measures, they show:

11. Social safety transfers can help compensate for the adverse impact from the VAT increase on the poor.

12. The impact from doubling excises on both revenue and poverty incidence estimated in the simulations appears limited; but it likely understates the effect of revenue generation due to under-reporting of expenditures by households (Table 1).

13. Progress has been made under the Power Sector Recovery Plan (PSRP); tariff adjustments over time—combined with improved electricity service—will be needed to bring the power sector to a level at which it can operate without a financial deficit. Power supply generation has increased and reached a record high of 5100MW in the grid at the end of 2017, on the back of a number of actions (appropriate budget provisions to ensure government agencies pay their electricity bills; enabling the Bulk Trader to pay for generated power). The tariff increase of 60 percent in 2016 has brought electricity prices closer to cost recovery. The Nigerian authorities expect further tariff increases to have very low public acceptance until service improves from the current very low levels and sector losses and leakages are reduced. The PSRP involves a package of measures to reduce sector inefficiencies and costs, improve payment discipline and adjust tariffs to restore financial viability and ensure power reliability going forward.

14. An increase in electricity tariffs would increase fiscal space significantly and reduce income inequality—but reduce households’ purchasing power, thus increasing poverty rates. For illustration purposes, an increase of electricity tariffs by 30 and 69 percent for residential customers, which were some of the tariff adjustment scenarios initially considered by the Government during the preparation of the PSRP, is estimated. The results suggest that such changes would increase fiscal space (assuming government would be paying the implicit subsidy going forward) by about Naira 100 billion and 200 billion, respectively (Figure 11, Panel 1). With less than 10 percent of total expenditures on electricity made by households at the bottom 50 percent of the income distribution and households at the higher end disproportionately benefiting from the current implicit subsidy (Figure 10), an increase in electricity tariffs would reduce income inequality slightly. The lack of access to electricity for a large share of lower-income households explains the relatively mild impact on the poverty headcount by around ¼ and ½ percentage point in this static simulation (Figure 11, Panel 2).

15. Both increased social transfers and the augmentation of the existing lifeline tariff could mitigate the impact on the poor. Scenarios 3 and 4 build on the 69 percent tariff increase to quantify the expenses needed to keep the poverty gap (scenario 3) or poverty rate (scenario 4) constant, with fiscal space staying positive in both scenarios despite the compensation package. Similarly, the lifeline tariff, which currently benefits only 2 percent of consumers, could be expanded as highlighted in scenarios 5 and 6 (Figure 11). The two scenarios provide this lifeline to all households at a rate of Naira 4/kWh up to 50 kWh/month (as currently the case; scenario 5) and up to 40 kWh/month, respectively, while they increase other prices by 69 percent. These scenarios are roughly budget neutral while decreasing the poverty headcount by ¼ percentage point.

A number of social and employment programs exist in Nigeria but their implementation at the federal and state level is impeded by limited coverage, undefined eligibility criteria, and lack of monitoring (World Bank 2016).

The ERGP envisions expanding social programs. The government’s ERGP aims at investing in social infrastructure, by implementing conditional cash transfers for the most vulnerable; advancing school feeding and public work programs; and improving the quality of health care and access to education, in particular (IMF 2017b):

18. A number of assumptions could impact and bias the above-described results:

19. The proposed fiscal measures yield substantial revenue gains and reduce income inequality. This chapter showed that fiscal space gained through proposed fiscal measures—VAT reform, an electricity tariff increase, and an increase in the excise rate on alcohol and tobacco, could be substantial. These measures by themselves are also expected to decrease income inequality.

20. However, poverty gaps and rates would likely rise significantly in response to these measures and call for compensating measures. In all scenarios, poverty rates would increase as consumable household income shrinks in response to larger expenses. Simulations of different degrees of social safety net expansions (increased transfer amount and increase in covered share of the population) show that social safety transfers, if efficiently run, could compensate for the negative impacts from the above-mentioned reforms. As social safety nets may not be immediately scalable to the desired extent in the short term, a package of other measures will be needed to compensate for the adverse impact on the most vulnerable. In particular, imposing a lifeline tariff for electricity will be needed. Using gained fiscal space to increase expenditures in education and health, not captured in the simulation, could improve the progressivity of the suggested measures and decrease the likely increase in poverty.

21. Indeed, estimated transfers and poverty gaps may overestimate the impact on the poor—provided that additional expenditures are efficiently used. Redistributing the generated tax revenues (and savings in subsidies) into public expenditures in itself would generate additional growth benefits, therefore increasing income, including for the poor. Since this chapter does not take into account these dynamic impacts, the sizes of estimated social measures to compensate for negative impacts could be overstated, so that “compensatory” transfers could actually deliver a reduction in poverty levels.

Prepared by Monique Newiak (IMF, AFR) and Stephen Younger (Commitment to Equity Institute), with input from Tu Chi Nguyen (World Bank). This chapter has benefited from comments and inputs from the National Bureau of Statistics Nigeria, the Federal Ministry of Labour and Employment Nigeria, the World Bank, and several IMF colleagues.

(Percent of the population)

Expenditure on Excises by Income Percentile 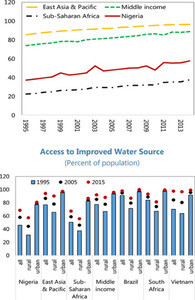 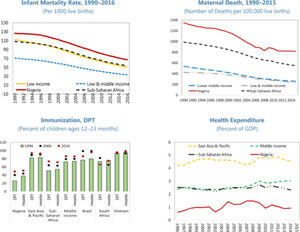 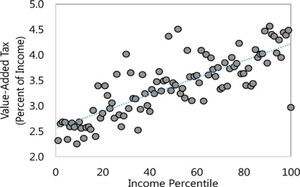 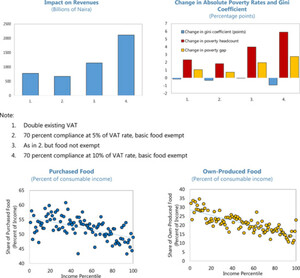 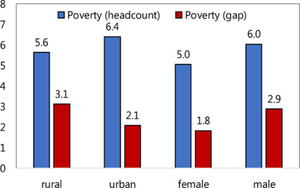 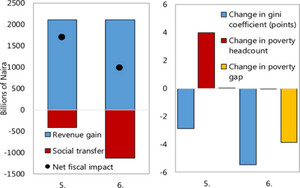 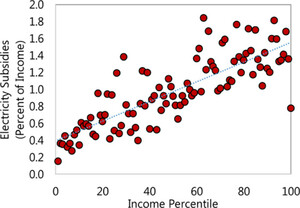