Third Review Under the Arrangement Under the Precautionary and Liquidity Line (PLL)-Press Release; Staff Report; and Statement by the Executive Director for Morocco

Third Review Under the Arrangement Under the Precautionary and Liquidity Line (PLL)-Press Release; Staff Report; and Statement by the Executive Director for Morocco

I welcome this discussion of the Third and last review of the 2016 PLL, and thank staff for a succinct report. The authorities broadly share staff assessment, but have some diverging views on the exchange rate and the strength of the external position, in particular (see below). The Board meeting on the Article IV consultation highlighted Morocco’s sound macroeconomic policies and fundamentals, and its strong track record of policy implementation. The authorities have also demonstrated strong commitment to reforms, in line with their undertakings under the PLL-supported program, even though the long transition to a new government after the September 2016 elections delayed some reforms. The strong performance of the economy has been duly recognized by the markets, with Morocco’s continued favorable ratings and low sovereign debt spreads compared to the EMBI average.

The authorities are determined to further strengthen the fundamentals of the economy, enhance its resilience, and put in place the conditions for higher and more inclusive growth and faster job creation. The new development model, which is under active preparation, will seek to respond to the legitimate needs of the population for jobs and decent living conditions, in particular for the youth, women, and the underprivileged, thereby strengthening social cohesion. This strategy should, among others, help to ensure consistency among different paths of reform and strengthen policy coordination and effectiveness. The stronger emphasis placed recently on effectiveness of policies and diligence in implementation has helped alleviate social tensions observed in the first half of 2017. The new high level committee chaired by the Head of Government and tasked with monitoring effectiveness of policies will play an important role in the implementation of this strategy.

It is in line with their unwavering commitment to reform and with full confidence in the alignment of the exchange rate with fundamentals, assessment also shared by the mission during the discussions last November, that the authorities have moved forward with implementation of a flexible exchange rate regime starting on Monday, January 15. This historic step has been well received by market participants, with no sign of exchange rate pressures during the first day of the new regime. Indeed, while the new band was set at +/- 2.5 percent, the exchange rate fluctuated within the old band of +/- 0.3 percent, and central bank sales of foreign currency under the new auction system were minimal ($3.5 million purchased against $20 million offered). Market conditions were broadly the same during the second day of the transition, and similar trends were observed in the offshore market. The authorities will monitor developments in the forex market closely and will take all needed measures to ensure its smooth functioning. They will assess progress in the initial phase of the transition in order to prepare for the next phases and the introduction of inflation targeting. However, they are of the view that any doubt cast on the alignment of the exchange rate with fundamentals or the strength of the external position at this stage could have a destabilizing effect on the market and hinder successful transition to the new regime.

This brings me to the issue of staff assessment of Morocco’s external position, as discussed in the Article IV consultation. My authorities have expressed their reservations about this assessment, as highlighted last month in my Buff statement. They remain confident that more recent data and a new run of the EBA exercise would vindicate their own views in this regard. Already, the level of reserves for end-2017 projected in this report is $1 billion higher than in the November 2017 Article IV report, and actual reserves were even higher by another $0.4 billion. Eventually, the decline in official reserves in mid-2017, resulting from sales to domestic banks for hedging transactions prior to what was announced as the start of the transition, was fully recouped, with the level of reserves increasing by $0.8 billion compared to 2016. Improved external current account balance from the projections under the second PLL review in July, notwithstanding higher oil prices, has contributed significantly to this outcome.

My authorities also consider that risks to the outlook indicated in the report should be better balanced. They are of the view that ongoing efforts to increase regional and product diversification, and stronger global growth, including in Europe, could lead to improved growth and external position in Morocco compared to current projections. Moreover, recent improvement in weather conditions from earlier projections could boost growth in 2018.

The authorities continue to value the role played by the PLL in anchoring policies and providing insurance to help shield the economy against exogenous shocks, and are grateful to the Executive Board, management, and staff for their support. They highly value the technical assistance provided by the Fund. They also welcome the indication that Morocco continues to meet the PLL eligibility criteria. However, they are of the view that Morocco continues to perform strongly under the external position and market access criterion.

The authorities will continue to treat the PLL as precautionary. They will assess the need for further recourse to Fund financial support under the PLL or other arrangement as well as the size of access prior to the expiration of this arrangement next July. This assessment will be conducted in close consultation with the Fund, in light of developments in the exogenous risks facing Morocco and progress in further strengthening the country’s resilience. 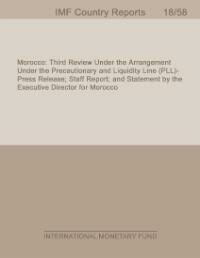