Since the time of the Article IV consultation in Honiara in September 2017, a new Government is in place. The priorities of the new Government are to maintain political stability, reinvigorate economic growth through achievable investments in infrastructure, stabilize government finances by addressing the cash flow situation and instilling fiscal discipline.

Authorities broadly agree with staff’s assessment of economic activity. Growth in 2017 was in line with the authorities’ expectation of around 3.2 percent largely driven by log exports, fishing revenues and construction.

Authorities are more optimistic than staff about the prospects for future growth, expecting average growth of around 4 percent for the period 2018–2020. Authorities expect that major projects such as the Gold Ridge mining development, the submarine fiber optic cable, and World Bank supported Tina River Hydro project will come on stream over the period. The authorities have factored them into their baseline projections as they are confident about the prospect of them coming to fruition while staff note these as upside risks. These projects will boost economic activity, providing more jobs in the mining, construction, communication and energy sectors and more mining revenue for the government. Public investments, particularly in national infrastructure projects such as roads, bridges and wharves, are key to driving broader-based growth than mining, tourism and agriculture.

Authorities are fully aware of the need to diversify the economy from a reliance on logging exports given the finite forest resources. While the timing of the decline of the logging sector is uncertain, authorities consider that growth in the mining sector should cushion declines in logging activities over the medium to long-term. Other potential sectors that can support medium to long-term growth are agriculture, tourism, and fisheries.

In agriculture, the government and donor partners are supporting plans to expand palm oil plantations further east on Guadalcanal. This should increase the plantation area almost twofold. In the fisheries sector, National Fisheries Development Ltd (NFD) has seen an increase in its fishing fleet, which should boost the volume that SolTuna Limited can process. In the tourism sector the new international airport at Munda in Western Province remains a work in progress but, if completed, Munda International airport should open direct routes for foreign tourists into the Western province, with pristine natural beaches.

Authorities take serious note of staff recommendations on fiscal policy. Key fiscal priorities for the Solomon Islands government are restoring fiscal discipline including by rebuilding cash buffers, while facilitating much needed investment in infrastructure. Authorities recognize that the fiscal position in 2017 has deteriorated due to increased expenditure in a number of areas and an over-optimistic outlook for revenue collections.

Authorities are working hard to finalize the 2018 Budget, which aims to curb recurrent expenditure in administrative areas, while protecting social spending and prioritizing growth enhancing spending to support productive sectors of the economy like infrastructure, tourism, agriculture, fisheries and mining.

The government is actively prioritizing cash payments including all payroll obligations to limit the spillover to the economy associated with late government payments and working on a strategy to deal with government arrears.

On the revenue side, the Government has done considerable work to tighten compliance and improve tax administration with technical support from PFTAC. This includes strengthening debt and tax management through the centralization of debt collection activities and the modernization of tax payment and lodgment facilities by introducing an online platform. In addition, authorities have conducted seminars to assist business understand their tax obligations and have recently appointed an audit advisor to examine cases of tax avoidance.

Authorities are actively considering further tax reforms to enhance revenue mobilization, including the introduction of a consumption-based tax and seeking to eliminate ad-hoc exemptions.

Debt as a percent of GDP remains low at around 10 percent of GDP in 2017, one of the lowest in the Pacific, but will increase as the government undertakes much needed investment in infrastructure. The Government is investing in key projects such as the Honiara Road improvement project, new wharves under the National Transport Fund, the submarine cable project, and the Tina Hydro dam project which is expected to provide more than 200 jobs during construction and will greatly reduce carbon emissions.

Recognizing the infrastructure gap that means less than half of the population have access to electricity, and far fewer in rural areas, and 59 percent of households have to travel to access clean water, authorities and development partners are investing in a number of infrastructure projects and making them climate resilient. This includes roads, wharves, airstrips and urban waste management infrastructure that are in line with the National Development Strategy and Sustainable Development goals. In addition, in the energy sector the State-owned enterprise (Solomon Islands Electricity Authority) with the assistance of development partners has started building mini hybrid power stations in the provinces to improve household and business access to electricity.

As a country highly vulnerable to climate change and heavily exposed to shocks from a high frequency of natural disasters, authorities appreciated staff incorporating these factors in the Debt Sustainability Analysis. This is the first time that such a shock scenario has been incorporated into staff projections and authorities found it useful to get a sense of the potential impact a natural disaster can have on economic growth and debt dynamics. The analysis helps to reinforce the importance of having strong fiscal buffers to increase the government’s flexibility to respond to natural disasters and to undertake investments in climate proof infrastructure to increase resilience.

Authorities view the current monetary policy stance as appropriate. They have a focus on stability over competitiveness and view the basket peg exchange rate regime as working well. Authorities recognize IMF advice to increase the cash reserve requirement given the high levels of liquidity in the system. However, with contained credit growth and low inflation, authorities prefer a more gradual approach to avoid putting any unnecessary pressure on domestic banks. Authorities expect the need to finance new infrastructure projects and the issuance of its own Bokolo bills will also slowly soak up excess liquidity.

The National Financial Inclusion Taskforce (NFIT) established four working groups during 2017 to help drive the implementation of the National Financial Inclusion Strategy. Key work streams for these groups have been to increase financial literacy and financial education, introduce a pilot for voluntary savings products for the informal sector with the Solomon Islands National Provident Fund, open digital payment channels with the Inland Revenue Department and pilot digitization of the agricultural value chain including payments to coconut farmers and workers.

The Central Bank of Solomon Islands has been working hard to bring previously unbanked people into the formal financial sector. Authorities recognize that given low literacy levels, people need to be protected and have introduced two prudential guidelines aimed at protecting financial sector consumers from predatory practices and boosting their confidence in interacting with the financial system. The Central Bank of Solomon Islands will continue to monitor the growth of this sector and will introduce appropriate regulation and legislation when the market matures. Looking ahead, phase two of the strategy is to encourage greater usage of newly opened accounts.

Finally, the Solomon Islands authorities would like to thank development partners for their continued support and the mission team, led by Ms. Alison Stuart, for the candid and constructive discussions they have had during the article IV consultation. They value highly the advice and technical assistance received from the Fund and look forward to further constructive engagement in future. 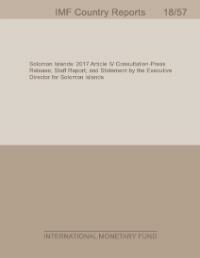