The GFS advisor for South East Europe is hosted by the Center for Excellence in Finance, Ljubljana, Slovenia.

The CBBH and BHAS have a memorandum of understanding in place; however, it requires updating inter alia to address coordination on EU reporting requirements.

Bosnia and Herzegovina: Government Sectors According to GFS Classification1 and Compiling Responsibilities 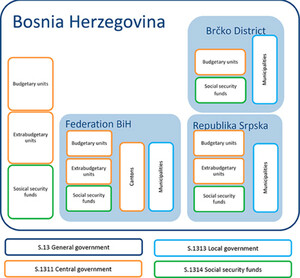