A. Background and Recent Developments

1. Real estate has been a key engine of China’s rapid growth in the past decade. Real estate investment grew rapidly from about 4 percent of GDP in 1997 to the peak of 15 percent of GDP in 2014, with residential investment accounting for over two-thirds of total housing investment. Local markets vary significantly because of China’s large geographical and economic size, economic and social diversity, and fragmented local government policies. Housing cycles tend to be more pronounced in top-tier cities in terms of price volatility, but they account for a small fraction of real estate inventory and investment. Smaller cities constituted over half of residential real estate investment, but price increases on average were much lower.

2. Distortions render China’s property market susceptible to both price misalignment and overbuilding. On the supply side, the market is distorted by local governments’ control on land supply and their reliance on land sales to finance spending (land sales accounted for about 30 percent of local government revenue in 2016). On the demand side, the market is prone to overvaluation—housing is attractive as an investment instrument given a history of robust capital gains, high savings, real deposit interest rates that tended to be negative, a lack of alternative financial assets, and capital account restrictions.

3. After a temporary slowdown in 2014–2015, the real estate market rebounded sharply. The strong pick up in both prices and transaction volumes reflected accommodative credit conditions and progressive policy easing starting in 2015, including reductions in down payment requirements and benchmark lending rates as well as property transaction tax cuts. This round of the upturn, however, differed somewhat from previous real estate cycles, with the investment rebound more modest, and until recently, the price surge largely concentrated in tier 1 and a few tier 2 cities. Residential property sales have moderated recently across city-tiers, but are still at 12 percent y/y in May 2017 in terms of volume of floor space sold. Strong sales, including the sales of social housing under government policies, coupled with soft housing starts have led to a rapid destocking across all city-tiers, with the nationwide housing inventory ratio (measured by unsold units to annualized sales) declining sharply to about 18–20 months from 30 months at the peak in 2014.

4. The housing market rebound has been accompanied by strong mortgage growth and a buildup of household debt. Down payment ratios have remained high for new mortgages (40 percent of buyers of a first home have a down payment ratio of 25 percent or higher), but the average loan-to-value ratio (calculated as new mortgage loans to property sales ratio) has increased from around 15 percent in 2012 to 48 percent in 2016. Household balance sheets have remained robust, though buffers are eroding. Household debt increased from less than 20 percent of GDP in 2008 to more than 40 percent, with mortgages accounting for more than half of outstanding household debt. Although this ratio is still far below the average OECD level of 102 percent of GDP, it is already higher than in some other large emerging economies.

5. As signs of overheating emerged, the government implemented a range of measures differentiated across cities. Key measures include: tighter down-payment requirements, home purchase restrictions, higher mortgages rates and financing restrictions for property developers. Our analysis suggests that these measures have been effective, as evidenced by the moderation in price rises (in sequential month-on-month basis) in large cities, as well as in new mortgage loans and real estate sales. Empirical estimations confirm that changes to down payment requirements have been effective in dampening price cycles (Annex I). Given the so-far modest recovery in real estate investment, robust underlying demand in major cities, and still solid household balance sheets, the impact of overheating should be contained, especially if government action continues and broadens as recommended by staff (see below).

B. Risks in the Real Estate Market

6. The main near-term risks are house prices rising further beyond “fundamental” levels and the bubble expanding to smaller cities, increasing the likelihood and costs of a sharp correction. Although nationwide house prices deviate only 5 percent from their long-term trend (based on HP filtering), the price deviation for tier-1 cities is much greater at about 10–15 percent. In previous cycles, this level of overvaluation was followed by a slowdown in real estate activity.

7. A sharp correction, possibly from overzealous tightening measures, could weaken growth through weaker housing investment and consumption. Our estimation suggests that a correction of house prices by 10–15 percent (roughly the magnitude in previous cycles) would reduce GDP growth by around 0.9 percentage points through the impact on property investment and household consumption. Indeed, real estate investment may start to slow in the coming months reflecting intensified regulatory and supervisory tightening. A sharp correction in prices would also weaken local public finances. Even if local governments can maintain prices by restricting land supply, tighter government spending would have knock-on effects on growth.

8. A sudden correction in the housing market could also pose risks to financial stability. It would likely lead to an increase in impaired loans and deterioration in profitability and capitalization of financial institutions. The impact through the mortgage channel is likely to be limited given still low household leverage. The highly leveraged small real estate developers, as well as small city-level banks that are exposed to the weak developers, are likely to be the weakest link in the short run. A sharp decline in valuations and household and corporate borrowing would have knock-on effects on the real economy, which would exacerbate asset quality problems and amplify the impact of the initial shock. Banks and other intermediaries would be simultaneously hit by credit and market losses. China has never experienced a significant decline in house prices, so it is uncertain how such a scenario would unfold. On the other hand, the government still has much control over the real estate markets and the financial system, and will likely take further administrative measures to stabilize in response (as it did in 2015).

9. Given the significant divergence in China’s housing markets, macro-prudential policies tailored to local conditions should continue to be the first line of defense. The differentiated LTV limits by borrowers (first-time home buyers versus investors) and by regions are appropriate as they can be targeted at the riskier segments of the markets. On the other hand, changes in the LTV limits can be pro-cyclical and result in higher credit losses in the future by allowing borrowers to borrow more during boom cycles. In this regard, the government should consider expanding the macro-prudential policy toolkit to include measures such as a more active use of debt servicing-to-income (DSTI) caps. DSTI requirements can ensure affordability and enhance the effectiveness of LTV limits in addressing excessive credit growth by restricting the use of unsecured loans to attain the minimum down payment. The current cap (50–55 percent) should be gradually tightened to the international norms of below 45 percent and extended to other types of household loans including loans from non-bank financial institutions.2 Stress testing of household debt servicing capacity to interest rate and income shocks can also be used to gauge the potential risks in adverse scenarios.

10. The government should also consider sectoral capital requirements through increasing risk weights or loan given default (LGD) floors on banks’ exposure to the real estate sector. These requirements can be tightened during market booms to increase the cost of funding for property developers and build additional buffers (He et al 2016). To make better use of macro-prudential tools, stepped up efforts are needed in collecting information beyond aggregate credit and house prices, such as indicators on borrowers and speculative activities .

11. Less reliance on administrative measures such as home purchase restrictions and funding restrictions would be desirable over the medium term. Although they tend to be effective in suppressing demand in the short run, these measures can have an excessively abrupt impact, resulting in more distortions and circumvention compared to market-based or macro-prudential measures. Moreover, home purchase restrictions tend to affect disproportionately new migrants, thus undermining the efforts in urbanization.

12. The government should also introduce recurrent property taxes by overcoming the remaining hurdles on registration of properties and legislation procedures. The recent announcement to have a nationwide system on property registration by 2017 is welcome. The benefits of property taxes are two-fold. First, cross country evidence points to the dampening impact of property taxes on house price volatility (Andrews 2010). Second, the introduction of recurrent property taxes can provide revenue sources for local governments to finance local public services and avoid excessive dependence on (volatile) land sales, which in turn would dampen the adverse effects of boom bust cycles in real estate (Wingender 2017). A (partial) decoupling of house prices and local government financing is also likely to change households’ expectation that the housing market is “too important to fail”. The implementation of property taxes can be gradual (but decisive) given the potentially large impact on the economy.

13. More focus on increasing real estate supply at a pace commensurate with that of demand, especially in higher-tier cities where incomes and productivity growth are highest, is welcome. Increasing land supply and building higher-density housing in major cities can attract migrants and facilitate a smooth transition in the housing market.3 This can be complemented with reforms on social security and household registration (hukou) to give migrants from rural areas greater access to public services (World Bank 2016). Also, reducing (excessive) domestic savings and continuing gradual and cautious opening of the capital account would help reduce pressure on housing prices and the propensity for recurrent asset price boom/bust cycles.

14. More fundamentally, China should de-emphasize quantitative GDP growth targets that have fostered an undesirable focus on short-term, low-quality stimulus measures. The government has had the tendency of boosting infrastructure spending, real estate activity and credit during economic downturns to meet growth targets, creating the perception that housing is an aggregate demand instrument. This perception can reinforce the role of housing as an asset class and amplify the boom/bust cycles. If quantitative targets were to be de-emphasized, dynamics in the real estate market would be more aligned to reflect fundamental demand and supply conditions, which would allow prudential policies to play a larger role in guarding against macro-financial risks.

Most countries with caps on DSTI ratios have imposed 40–45 percent as the limit (IMF 2014).

Population density in Chinese cities is typically much lower than major American metropolitan areas. For example, the first tier cities have population density varying from 1,000 to 2,000 people per square kilometer in 2010, whereas the top 100 American MSAs (metropolitan statistical area) all have density above 4,000 people per square kilometer (Glaeser et al 2016). 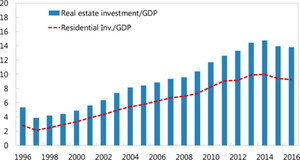 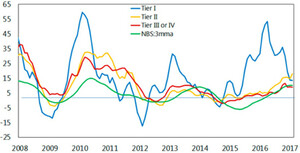