1. The capital account has been opened gradually amid evolving policy priorities. High domestic savings searching for yield and diversification, interest rate differentials and exchange rate expectations have driven capital in and out of China. Also, “Going Global”, “One Belt One Road”, “RMB internationalization”, “Made in China 2025” and other policies have provided impetus for capital flows over time. Generally, capital inflows were liberalized before outflows and FDI flows before portfolio and other flows. The key liberalization milestones were as follows:

3. De facto, however, China’s capital account is more open than indicated by the above de jure indices as shown by the surge of capital outflows in 2015 and 2016. On a flow basis, capital flows into China (as a percent of GDP) are of similar magnitude as those into comparable emerging markets.4 However, as China commenced opening later than others, therefore on a stock basis, capital account openness still lags that of its peers. Net capital outflows reached a record of around $648 billion in 2015 (5.8 percent of GDP), mostly driven by other investments and errors and omissions. In 2016, outflows amounted to almost US$640 billion (5.7 percent of GDP), driven by all categories of the financial account and errors and omissions. These outflows resulted in significant depreciation of the RMB, which was partially cushioned by FX intervention.

4. The removal of Capital Flow Management Measures (CFMs) in the sequencing of capital flow liberalization has been broadly in line with the Fund’s Institutional View.5 As described above (¶1), China first liberalized FDI inflows, which are a stable source of capital and considered to be a driver of growth resulting from technology transfer and other positive spillovers to the economy. This helped fuel the export sector after China joined the WTO in 2001. ODI was the next to be liberalized, followed by other longer-term inflows (including through mandatory holding periods of portfolio investments). Short-term flows (including external debt) were liberalized later. In general, China cautiously tested its liberalization policy on a small number of companies or in free trade zones before generalizing it to broader sets of sectors or regions.

5. However, progress in implementing necessary supporting reforms has been slower than desirable (Appendix II). In recent years, there has been limited progress in reforms that would improve the resilience to capital flow volatility. In particular, financial stability risks have accumulated and are now complicating the conduct of monetary policy, as even modest interest rate increases have the potential to create stress for smaller and over-leveraged financial institutions. Gaps in supervision/regulation and in the macro prudential framework, as well as high corporate debt and insufficient progress in reforming state-owned enterprises (SOEs), also raise potential systemic risk concerns. Quasi-fiscal pressures from local governments have also contributed to increasing debt and vulnerabilities. Faster progress on increasing exchange rate flexibility and further developing the monetary policy framework would have strengthened the ability of the economy to manage better capital flows following their liberalization.

6. Given the limited progress on reforms and associated growing vulnerabilities, China has relied heavily on tighter enforcement of existing restrictions during recent bouts of capital outflows (Appendix I). Amid persistent depreciation expectations, the inability of exchange rate and monetary policy to help materially absorb shocks has placed the burden on CFMs and FX intervention to deal with capital flow volatility. Since mid-2016, the authorities stepped up enforcement of existing CFMs and tightened a few others, which has contributed to curbing outflow pressure since late 2016.6 Subsequently, intervention by the PBC has subsided and headline reserves have increased modestly to stabilize at slightly above USD 3 trillion. While the authorities’ measures have contributed to the reduction of outflows, other factors (e.g. a better growth outlook in early 2017, anchored exchange rate expectations) appear to have played an important role as well.

7. While the recent tightening of CFMs is in line with the IMF’s institutional view on capital flows, there are several concerns to consider. As necessary supporting reforms have not kept pace with the liberalization of capital flows, a tightening in CFMs is a possible policy response to capital outflows. Nonetheless, macroeconomic policies should play a more central role in managing outflows and structural reforms should be accelerated;7 in addition, tightening of CFMs will likely lose effectiveness over time, adversely affect the business climate and could reduce incentives for reforms.

8. When imposing CFMs is warranted, they should be implemented consistently and transparently. First, CFMs should be implemented consistently over time and across locations, and clearly communicated to market participants. Loosening or tightening implementation in response to capital flows creates the perception that rules are enforced in ways that are uneven and unpredictable. Second, CFMs should be implemented transparently, preferably through written rules. Even a perception that new CFMs are introduced through window guidance could give rise to unintended consequences (e.g. corporations could switch from transacting in RMB to transacting in FX if they perceive cross-border RMB transactions might be constrained, thereby reversing progress in RMB internationalization). Finally, even when CFMs are warranted, they should be designed and implemented such that they not restrict current international payments and transfers.

9. The authorities should expeditiously implement key reforms that would help strengthen the resilience of the economy and financial system to capital flows. Financial sector reforms (including to supervision and the macro prudential policy framework) and further strengthening of the monetary policy framework are vital to ensuring an efficient allocation of capital. In this respect, the regulatory/supervisory tightening in the financial sector, starting early 2017, is critically important and should continue. SOE reforms are also critical to increase efficiency of resource allocation and contain financial sector vulnerabilities. Hard budget constraints would help dispel the wide-spread perception of state guarantees, which leads to mispricing of assets and risks.

10. Further liberalization should proceed cautiously by assessing benefits and costs, while pushing ahead with supporting reforms. Liberalization should be paced and phased appropriately in tandem with the necessary reforms. Further liberalization of inflows for the purpose of providing immediate relief against outflow pressure could increase risks of disruptive outflows in the future, should depreciation expectations resume. However, in areas where capital flows are less volatile and where China would benefit from more openness, the benefits of liberalization may outweigh risks. Liberalization could proceed in these areas, potentially including FDI in service sectors, where there is room for rapid efficiency and productivity gains. Not only does FDI provide a stable source of capital, but entry of high-quality investors could help raise sectoral productivity. Financial services and health are areas where carefully crafted liberalization could also be beneficial. In the financial sector, the recent envisaged opening to foreign entities, including credit rating agencies, could help improve capital allocation and boost the overall efficiency of the financial sector. To help support a more flexible exchange rate, consideration should also be given to eliminating or gradually reducing the reserve requirement for onshore FX hedging. If derivative transactions give rise to financial stability concerns, appropriate macro prudential measures should be considered.

11. The challenges of the “impossible trinity” are becoming apparent. Among other reasons, the size of the Chinese economy makes it desirable to move towards an independent monetary policy. This implies that the authorities must choose between the extent of capital account openness and exchange rate flexibility. Exchange rate flexibility will help absorb the impact of shocks, including those resulting from capital flows surges, while relaxing the necessity to impose or maintain a wide range of CFMs. Thus, deep reforms, including those which allow for greater macroeconomic policy adjustment should be expedited to allow the country to benefit from greater financial openness while mitigating the associated risks.

The Chinn-Ito index is the first standardized principal component of four binary indicators built from AREAER (The IMF’s Annual Report on Exchange Arrangements and Exchange Restrictions).

The Quinn index measures the intensity of controls in each category, not merely whether it is open or not. It scores (0, 0.5, 1, 1.5, or 2) based on the severity of restrictions (existence of approval requirements and frequency of approval).

For a comprehensive summary of the IV, see: Box 1 in “Capital Flows—Review of Experience with the Institutional View”, IMF 2016 and Box 1 in “Managing Capital Outflows—Further Operational Considerations”, IMF 2015.

There have also been reports of the use of window guidance to tighten the enforcement of existing CFMs or to temporarily introduce new ones.

Per the Fund’s Institutional view (IV), capital outflows should be handled primarily with macroeconomic, structural, and financial sector policies, with CFMs only being useful in certain circumstances, i.e. as part of a broader policy package in crisis-type situations or when liberalization has outpaced the capacity of the economy to safely handle the resulting flows. 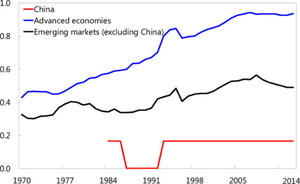 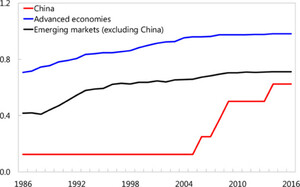 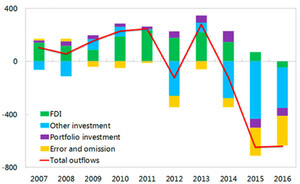 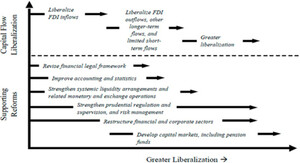