1. China has witnessed rapid financial innovation and undertaken significant financial market liberalization and reform, which have transformed its financial sector over the past few years. Banks still play a major role in financial intermediation but other nonbank financial institutions and capital markets have become more prominent as a source of credit and in the provision of financial services to Chinese firms and households. Overall, China’s financial system has become more market-based but also more complex. In response, the PBC’s operational conduct of monetary policy is relying increasingly on a standard market-based system and its policy interest rates have become the main instrument of monetary policy. This paper seeks to answer the following questions on the monetary transmission channel:

2. China’s monetary policy is becoming more market-based. Credit controls and constraints on bank lending and deposit rates have now largely been abolished and short-term market interest rates increasingly contain information about the monetary policy stance. Although money growth (M2) remains the official intermediate target (12 percent y/y for 2017), the PBC has clearly de-emphasized its importance and mentioned that it is now using the 7-day repo rate to send policy signals (see, PBC 2016). The PBC has also indicated that it considers the 7-day interbank repo rate (specifically the volume-weighted daily average of repo transactions between depository institutions, published as DR007) as the appropriate operating target. Since about mid-2015, this rate has stayed in the new interest rate corridor which has de facto been defined by the PBC’s repo operations bid rate as the lower bound and the rate for the PBC’s standing lending facility (SLF) as the upper bound (Figure below).2 Domestic banks can access the PBC’s standing lending facility at any time against a relatively broad pool of collateral (including bank loans) if they meet the PBC’s macroprudential requirements (MPA).3

3. In early 2017, the PBC started gradually to increase the rate for its open market (repo) operations and SLFs. The PBC raised its reverse repo operations bid rate and the rate on its standing lending facilities twice by 10 bps in February and March.4 These rate hikes came in the wake of somewhat higher money market volatility during the second half of 2016 when the PBC steered the interbank 7-day repo rate towards the middle of the corridor by supplying less liquidity in its daily open market operations than bid for by banks.5 In early 2017, the PBC occasionally suspended its daily operations to encourage more market activity.

4. The monetary policy stance in China can broadly be summarized by the PBC’s policy rates. Historically, the PBC has employed several tools (price- and quantity-based) to conduct monetary policy. The PBC’s benchmark interest rates for bank lending and deposit rates, the PBC’s OMO rates, reserve requirements, FX intervention and direct lending controls have all been employed as monetary policy tools in the past. Changes in OMO rates, reserve requirements and FX intervention all affect the interbank repo rate but its variations can also reflect liquidity demand shocks that are not fully accommodated by the PBC. In the following analysis, we assume that variations in the 7-day interbank repo rate (even before it effectively became a key operating target in mid-2015) were largely determined by the PBC, especially at lower frequencies/longer horizons, and it can therefore be interpreted as a “shadow” policy rate in addition to the PBC’s benchmark lending rate over our sample 2005–16. This implies that the PBC’s use of quantity tools was calibrated to be broadly consistent with its interest rate stance. De facto, the interest rate corridor has been introduced and the PBC’s 7-day repo rate for its open market operations has effectively taken over the role of the key policy rate, although it has not been officially announced.

7. A VAR analysis with output and prices suggests a significant impact of changes in the PBC’s policy rates on economic activity, and with some lag, on prices. There is growing evidence that the monetary transmission mechanism in China has improved and is increasingly resembling that in major market economies. In a quarterly VAR, the GDP response to changes in the interbank repo rate is significant and the cumulative output loss is large at about 1.7 percent after two years following a 100bps rate increase. There is also a modest reduction in CPI headline inflation (about 0.2 percentage points after two years) but the response is not statistically significantly. Changes in the PBC benchmark rate have a modest but significant impact on inflation while the output declines as well but its impulse response function falls within the two-standard error band. Repo rate changes have a significant impact on both output and prices if CPI inflation is replaced with the GDP deflator in the quarterly VAR.

8. Changes in quantitative measures of the monetary policy stance (M2, or aggregate loan volume) do not produce a significant response in either GDP or inflation/deflator. When M2 or bank loans are added to the VAR with output, prices and policy rates, or replace the latter, their changes do not have a significant impact on output and prices in most specifications. At the same time, positive policy rate changes (rate hikes) trigger a decline in M2 and bank loans. These findings are broadly in line with other studies, including Fernald and others (2014) who find that changes in Chinese interest rates have a substantial impact on economic activity and inflation, while other measures of changes in credit conditions, such as shocks to M2 or lending levels do not on their own.

9. The PBC’s new interest rate corridor encompasses the key effective policy rates. These rates include the PBC’s 7-day repo rate through which it provides liquidity to the banks on a frequent basis, the rate on excess reserves if banks deposit more funds with the PBC than required, and the rate on the 7-day standing lending facility, which offers weekly liquidity to banks on demand. Since the “de facto” introduction of the corridor (mid 2015), the PBC has steered the 7-day interbank repo rate (DR007) close to its own repo rate but has recently allowed somewhat more market rate volatility within the 100bps corridor defined by the PBC’s 7-day repo and SLF rate.

10. Assessing the appropriate level of policy rates is a difficult undertaking especially in the Chinese context. Although price and output stability are important targets for the PBC, exchange rate, capital flow and financial stability considerations also play a role in China. However, estimations of a policy reaction function with either the benchmark or repo rate as the policy instrument provide the best fit when inflation and output variations are driving policy rate adjustments which tend to be highly persistent.

11. In the longer run, China’s neutral real interest rate is likely to be somewhat higher than in other major advanced economies.

12. Taylor rules suggest that the current stance of monetary policy (in early 2017) is accommodative. Regressing the PBC’s benchmark lending rate on the output gap and inflation provides a reasonably good fit once the relatively high persistence in the effective policy rates is modeled with an appropriate lag structure.7 These rules point to an expansionary monetary stance at the end of 2016 as it had been somewhat more accommodative than implied by the rule (by 100 bps). However, the simple Taylor rules implicitly assume a constant neutral rate which may not have been the case over past decade. Going forward, they are not very likely to provide a stable long-term relationship as China continues its transition to a more balanced and market-based economy. It is likely that China’s neutral real interest rate may rise as financial liberalization continues and remaining credit constraints for households and private firms (and preferential credit conditions for SOEs) are removed. A lower national savings rate would likely work in the same direction.

D. The Next Steps in The Transition to a Market-based Monetary Policy Framework

13. The PBC should gain operational (instrument) independence for its conduct of monetary policy.

Since mid-2015, the PBC has maintained a structural liquidity deficit in money markets which prevents the market repo rate from falling below the PBC’s rate. In case of a structural surplus (for example in case of quantitative easing, or large unsterilized FX purchases), the interest on excessive reserves would become the lower bound.

At the beginning of 2016, the People’s Bank of China (PBC) introduced the new macro prudential assessment (MPA) to address macro-prudential risks in the financial system. The MPA uses a scoring system (0–100) for sixteen indicators in seven categories to assess the soundness of banking institutions.

The PBC also lifted the rates of its longer-term (14-day, 28-day) repo operations and its medium-term lending facilities (MLF, 6-month, 12-month). However, these longer-term operations are conducted infrequently and MLF injections are mainly employed to offset the persistent liquidity drain from the PBC’s foreign exchange sales rather than to signal the overall policy stance.

Interbank refers to transactions between depository institutions in this note but in China the term “interbank” often refers to a broader repo market that include nonbank financial institutions.

To account for significant autocorrelation in the lending rate, its lagged values (2) were included in the regressions and the results were robust across various specifications.

The fit for the repo rate (using is as the “shadow policy rate” over the past decade) was worse and the output gap did not have any significant impact on the repo rate. This might reflect the fact that the PBC has occasionally hiked the repo rate because of financial stability concerns.

Impulse response functions after a 100bps shock to the interest rate 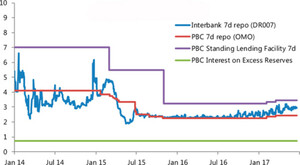 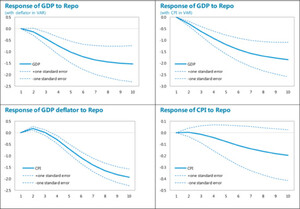 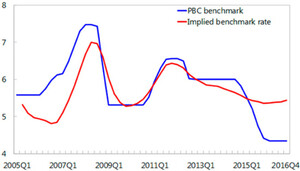