1. Strong growth after the global financial crisis was driven by rapid credit growth. Nominal credit to the nonfinancial sector more than doubled in the last five years, and the total domestic nonfinancial credit-to-GDP ratio increased by 60 ppt to about 230 percent in 2016 (Box 1). As a result, the credit gap—deviation of the credit-to-GDP ratio from its historical trend—is currently about 25 percent of GDP, well above the 10 percent BIS threshold for the maximum counter-cyclical buffer.

B. Why Worry About China’s Credit Boom?

2. Credit efficiency has been deteriorating, pointing to increasing resource misallocation. Credit to certain sectors (industrial), firms (SOEs), and regions (Northeast) is significantly higher than their value added, suggesting that they use credit relatively inefficiently. In 2007–08, new credit of about RMB 6½ trillion was needed to raise nominal GDP by about RMB 5 trillion per year; in 2015–16, it took RMB 20 trillion in new credit.

3. Sustainable growth—growth that can been achieved without excessive credit expansion—was likely much lower than actual growth over the last five years. For illustrative purposes, we estimate growth under a scenario in which the nonfinancial private sector credit-to-GDP ratio had only increased by 10 ppt, leading to no private sector credit gap in 2016. We use two approaches. The first approach calculates credit and GDP growth paths if credit efficiency had worsened less, in line with slower credit growth. The results indicate that average real GDP growth for 2012–16 would have been 5.3 percent rather than the actual average of 7.3 percent. The second approach (Chen and Ratnovksi, 2017) estimates growth using provincial panel data during 2003–15, assuming a lag in the effect of credit growth on output growth. It finds that 2012–16 average real GDP growth would have been 5.9 percent. However, the growth-subtracting effect of credit restraint could have been partly offset by pro-rebalancing, on-budget fiscal stimulus as well as by the productivity gains from more decisive structural reforms.

4. International experience suggests that China’s current credit trajectory is dangerous with increasing risks of a disruptive adjustment and/or a marked growth slowdown. We identify 43 cases of credit booms in which the credit-to-GDP ratio increased by more than 30 percentage points over a 5-year period. Among these, only 5 cases ended without a major growth slowdown or a financial crisis immediately afterwards. However, considering country-specific factors, these 5 country provide little comfort.2 In addition, all credit booms that began when the ratios were above 100 percent—as in China’s case—ended badly.

6. There are several China-specific factors that could be mitigating factors over the near term. A current account surplus and small external debt reduces the possibility for a typical external funding crisis as in many other EMs. A low bank loan-to-deposit ratio could help prevent a domestic funding crisis as well. Despite the rapid increase in gross debt, corporate balance sheets have also benefitted from asset values that have increased more than liabilities. Policy buffers can also mitigate the impact of potential shocks: the government can use its fiscal resources to backstop the system, the PBC can always provide liquidity, and capital controls can contain capital flight

7. However, these mitigating factors/buffers do not eliminate the eventual crisis risk and, if the risk is left unaddressed, would just make the boom larger and longer.

8. These factors buy time to address risks from the unsustainable credit growth and allow China to delever gradually. We consider an illustrative proactive scenario under which faster progress on enacting structural reform (especially SOE reform) and improving overall efficiency in resource allocation would allow credit growth to slow gradually, while supporting medium-term growth prospects. Near-term growth could dip reflecting the faster adjustment, but medium-term growth would rise driven by higher TFP growth (Lam and others, 2017). Improved credit efficiency would help raise GDP growth even with slower credit growth over the medium term (private credit growth of about 8½ percent), which would stabilize the ratio of total domestic nonfinancial sector credit-to-GDP at about 270 percent in 2022.

9. Decisive policy action is thus needed to deflate the credit boom smoothly. A precondition is to deemphasize high and hard GDP targets and the attendant excessive credit necessary to achieve these targets. To support growth while credit expansion slows, a comprehensive strategy is needed to increase credit efficiency by reducing demand for least efficient/productive uses. Financial reforms are also necessary to bolster the regulatory and supervisory framework, including closing loopholes for regulatory arbitrage, reining in leverage and increasing transparency of nonbank financial institutions and wealth management products (Box 2).

The IMF’s Institutional View on Monetary Policy and Financial Stability

The credit boom in New Zealand (1992) was due to a one-off credit expansion in 1988 from a low base. A boom in Hong Kong SAR (1983) should be seen in the context of its role as a global financial center. A boom in Finland (2003) was the result of economic recovery after large deleveraging in late 1990s. Credit booms in Indonesia (1990) and Switzerland (1985) eventually led to crises after futher credit expansion. 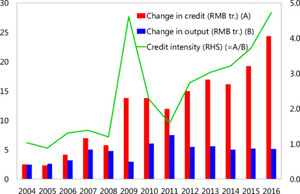 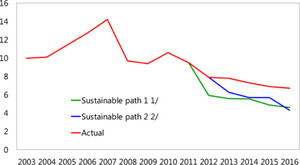