1. China has one of the highest levels of national savings in the world. Historically, national savings have been high since the 1980s, at around 35–40 percent of GDP. After China’s integration into the global trading system with WTO entry in 2001, savings surged to peak at 52 percent of GDP in 2008. Since the Global Financial Crisis (GFC), they have gradually come down to 46 percent in 2016. However, despite the moderation, China still stands out with one of the world’s highest savings rates, compared to the global average of around 25 percent of GDP.

2. High savings are at the heart of China’s external and internal imbalances. While insufficient national savings can pose financing constraints for economic development, excessive savings can also distort the economic structure and contribute to unsustainable growth. In the pre-GFC period, excess savings in China manifested in large external imbalances. The current account surplus surged to 9 percent of GDP in 2007, contributing to the global “savings glut” and low global interest rates. On the other hand, excessive savings when kept domestically are often intermediated through the financial system and can fuel a credit-based investment boom. After the GFC, while China’s external imbalance declined (with the current account surplus down to 2 percent of GDP), it morphed into a growing internal imbalance. Savings have financed excessive investment with falling efficiency, resulting in slower economic growth and a rapid build-up of debt.

3. High savings also depress household consumption and lower welfare. The flip side of high savings is low consumption. Despite the rebalancing efforts in recent years, China remains a global outlier in its demand structure, with the investment ratio elevated at 44 percent of GDP, while private consumption accounts for only 39 percent of GDP (compared to the global average of around 60 percent). In other words, households have inadequately benefited from economic development. While households could potentially depress current consumption in return for higher consumption in the future via investment, the resulting excess investment beyond the economy’s absorption capacity risks leading to negative returns and large defaults, hence lowering current and future household welfare.

5. From the late 1970s, savings increased dramatically amid massive structural transformation. The surge in household savings can be characterized in three phases:

6. Demographic changes account for about half of the rise in household savings. The one-child policy, introduced in late 1970s, has led to a rapid decline of the fertility rate from 6 to below 2 and resulted in an extremely low youth dependence ratio in China given its income level. Such demographic changes have increased household savings via two channels: a) less spending on children on the expenditure side; b) higher precautionary savings for retirement as fewer children imply less old-age support, which is the main source of livelihood for the elderly in China. Using the over-lapping generations model developed by Curtis et al (2015), we find that demographics alone can explain about half of the increase in the savings rate, holding income growth and interest rates constant. Adding income and interest rates, the full model can explain the broad savings trend, except for the 1980s and 1990s, likely reflecting increased precautionary savings with the gradual dismantling of the social safety net.

7. The economic transition of the 1980s/90s led to the breakdown of the social safety net and rising savings, a trend that recent policy efforts have aimed to reverse. The transition to a more market-based economy in the 1980s and 1990s has led to the dismantling of the social safety net in both rural and urban areas, with much reduced coverage and lower benefits. For example, the health care coverage of urban workers declined by 17 percentage points between 1990 and 2000, and the average replacement rate for urban workers (pension benefits in percent of wages) dropped sharply from close to 80 percent to below 50 percent. In recent years, significant policy efforts have been made to rebuild the social safety net, including the introduction of new rural health care and pension schemes and the basic pension scheme for non-working urban residents. Notwithstanding these policy efforts, government spending in these areas remains below international standards. In addition, access to health care remains an issue for migrant workers, reflecting the slow progress on “Hukou reform”.

8. Our analysis finds that higher social spending significantly reduces household savings, with differing impacts in urban and rural areas, suggesting targeted policy focus. We study the role of precautionary motives by looking at regional variation in government spending on education, health and social security. Using cross-sectional analysis for the 287 prefectural municipalities, we find a significant positive relationship between social spending and urban and rural consumption.

9. Income inequality translates into savings inequality. Income inequality has worsened substantially in China over the past decades, with the Gini index rising from 0.3 in the 1980s to about 0.5 in 2010, though it has moderated in recent years (Jain-Chandra et al 2017). Income inequality is associated with significant savings inequality. Based on Chinese Household Income Survey (CHIP) data, the difference between the saving rates of the richest and the poorest decile is often as large as 20 percentage points, reflecting the different propensity to consume. For example, in 2013, the top earners saved close to 50 percent of their income, while households in the bottom 10 percent saved about 20 percent.

10. Chinese households save more at any income decile compared to other countries, but the gap is largest for the poor. In many countries, the savings rate for the bottom 10–20 percent is often negative, reflecting substantial social transfers, while in China, the savings rate is positive and quite high at 20 percent. This likely reflects the lack of social transfers, inadequate progressivity in taxation, and the limited social safety net.

11. Housing ownership increased dramatically after the housing reform of the 1990s. Two major housing reforms in the past three decades have transformed China’s housing market. The 1988 reforms fostered the privatization of housing, and much of the stock of rental housing was sold to SOE workers at low prices; the 1998 reforms ended enterprise-supplied housing and moved to comprehensive market-based housing provision (Man 2011). After the reforms, housing ownership surged from 20 percent in 1988 to 90 percent in 2007, and has been stable since then.

12. Micro-level regressions show that the overall impact of household ownership on savings was positive in earlier years and turned negative in recent years. Prior to the housing reform in 1995, there was no systematic difference in the savings rates between tenants and home owners. After the reform, home owners started to save more than tenants, as shown in the 2002 and 2007 surveys. However, this trend reversed by 2013, with home owners saving marginally less than tenants. These patterns are confirmed by household level regressions, which control for other micro characteristics of households (such as age, sex, education, occupation, income, household size, etc). This likely reflects that the mortgage effect dominated in the early years for home owners, while with the booming housing market, the wealth effect has reduced home owners’ savings rate. Tenants’ savings rate continued to be higher reflecting the need to save for down payments.

13. Financial repression has become less relevant with interest rate liberalization. The “target saving” hypothesis suggests that depressed deposit rates could lead to higher household savings. Nabar (2013) finds that a 1 percent interest rate decline increases the household savings rate by about 0.5 percentage point. We find that even such a small quantitative effect disappears once cross-region income differences are controlled for in the regression. In addition, with rapid interest rate liberalization, and the proliferation of non-deposit financial products with much higher yields, financial repression is no longer a major driver of household savings today.

Overall, the analysis in this section suggests that rising household savings were largely a result of demographic changes, rising incomes and widening inequality, and breakdown of the social safety net, while housing reforms also contributed. It is difficult to pin down the contribution of each factor, as they often interact and reinforce each other, and some of these factors have started reversing in recent years (including rebuilding the social safety net and slight moderation in income inequality). Nonetheless, the chart here provides an illustrative assessment of the relative importance of various factors.

14. The corporate savings rate surged in the early 2000s, but moderated after the GFC. In line with macro data, firm-level data shows a significant increase in the gross corporate savings rate amid the export boom after WTO entry2. The rate moderated after the GFC as the economy slowed and the exchange rate gradually moved in line with fundamentals. The net savings rate (which is gross savings minus investment as a ratio to assets) was negative throughout last decade, reflecting high investment in China. As a result, in contrast to some other east-Asian countries, the corporate sector in China is not a driver of the current account surplus.

15. Corporate savings in China today are comparable to other countries. Firm-level analysis suggests that corporate savings ratios in China, in both gross and net terms, are comparable to those in the rest of the world. The median gross saving ratio is about 4 percent of assets in China, slightly lower than the 5–6 percent in the rest of the world. The net savings ratio is about −0.01 percent, also lower than global average of 0 – 0.1 percent.

16. SOEs have lower gross savings, but higher net savings compared to private firms. We study the role of ownership in corporate savings using firm-level regressions. After controlling for corporate size, Tobin’s q ratios, the impact of sectors and other macro variables (as well as time dummies), we find that Chinese SOEs tend to save less in gross terms, reflecting their low operating efficiency and profits, but more in net terms reflecting their lower investment ratios compared to private firms.

17. The level of the exchange rate played an important role in driving high corporate savings before the GFC. Regression analysis shows a significant impact of the exchange rate on corporate savings, and such an impact tends to be even larger in the tradable sector. During 2005–2008, the RMB was assessed to be undervalued, which contributed to the export boom and large corporate savings, especially for the export-oriented private sector. In recent years, however, as the RMB has gradually moved in line with equilibrium, the excessive savings of the export sector have largely been unwound.

E. The Role of the State and Policy Recommendations

More broadly, given the high household savings rate (as measured in percent of disposable income), the falling household share of national income further depressed household consumption, with the consumption-to-GDP ratio falling sharply in early 2000. A less skewed distribution of the benefits of growth between the state and households, including providing the private sector greater income earning opportunities, will remain essential to boosting household consumption.

22. Rapid aging and further strengthening of the social safety net would substantially reduce household savings. Going forward, China is expected to experience rapid aging, with the old-age dependency ratio rising from 15 in 2015 to 50 in 2050. Model simulations show that the projected demographic changes would reduce the households savings rate (in percent of disposable income) by 6 percentage points by 2030. In addition, with continued strengthening of the social safety net (assuming that government budget health expenditure-to-GDP ratio increases from 1.8 percent in 2016 to 2.5 percent by 2022), household savings, in percent of GDP, are forecast to fall by 3 percentage points by 2022. Changing consumer behavior of younger cohorts and slower wage growth may result in a faster decline in household savings rate.

Rotation from External to Internal Imbalance

Slowly Switching from Investment to Consumption

(in percent of disposable income)

(saving in percent of disposable income)

Save Rate by Home Ownership

(in percent of assets)

(In percent of gross income) 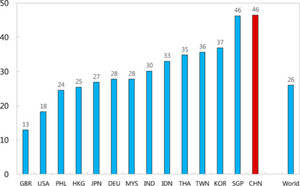 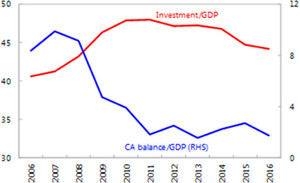 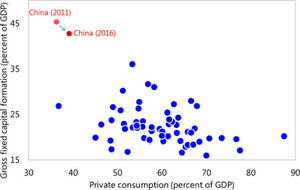 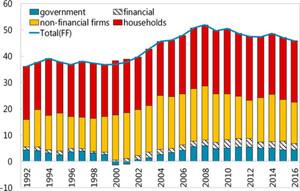 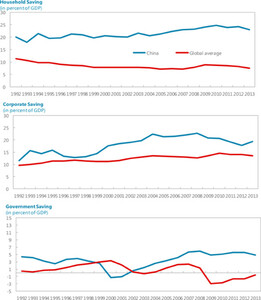 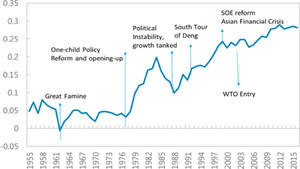 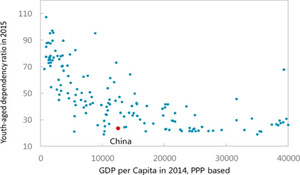 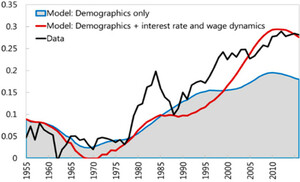 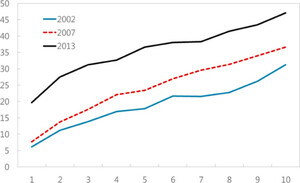 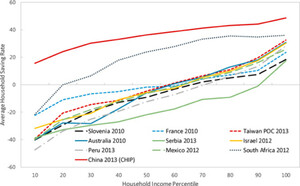 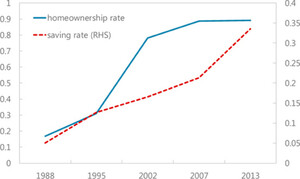 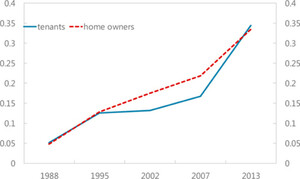 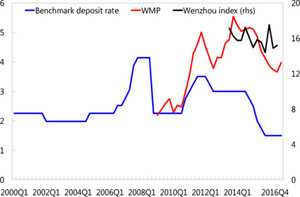 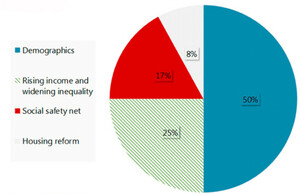 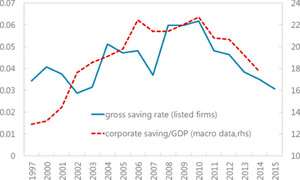 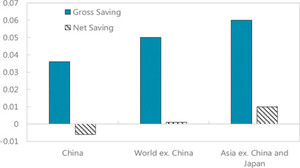 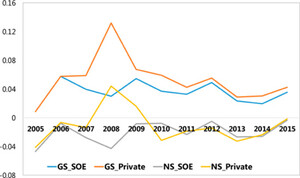 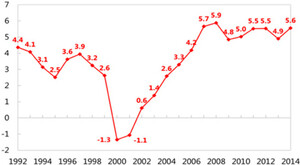 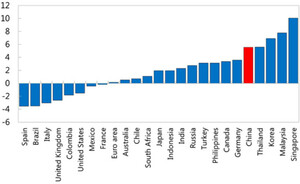 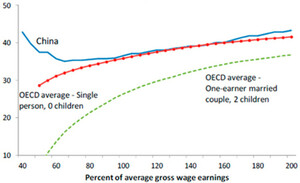 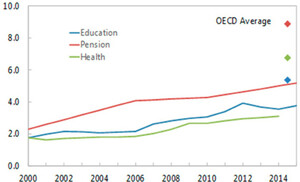 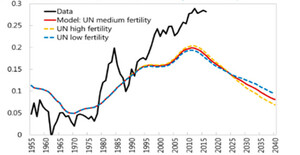 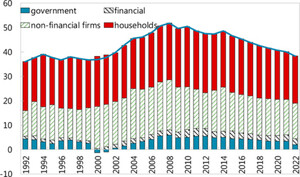 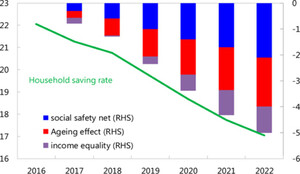