2. At the same time, the country is currently facing an acute labor shortage. The unemployment rate is now the lowest among the OECD countries (2.9 percent versus the OECD average at 6.2 percent in Q4 2016), and is at the lowest level since 1994.

3. Japan therefore faces two related challenges—first to increase the input of labor by females both in the short term and the medium term, and second, to increase the fertility rate so as to slow, or possibly reverse, the decline in its population. These two goals are seemingly contradictory, however, they have been successfully addressed in Nordic countries (Kinoshita and Guo, 2015).

4. Lifetime employment is common for male workers. Japan’s lifetime employment system, backed by seniority-based wages, became the standard after the 1950’s. Even after revising the Dispatched Workers Act in the late 1990’s to raise labor market flexibility, the system persists (especially for men) as employment laws make it almost impossible to fire regular workers. Nearly 30 percent of men work at the same firm where they started—virtually unchanged since 1990. Only 19 percent of women stay at the same firm, and the ratio has been declining.

5. Women are overrepresented in non-regular jobs. While Japan’s female labor force participation rate is already higher than the OECD average, more than 50 percent of women in the labor force are non-regular workers, compared to 20 percent of men. Women choose non-regular work to balance the demands of child care, elder care, and housework, due to limited availability of childcare and nursing facilities.3 The choice also reflects frequent demands for overtime (which is weakly regulated and either unpaid or underpaid) in the lifetime employment system, at the worst case leading to death from overwork (‘karoushi’).4 Also, regular works usually require frequent job rotation (which often involves compulsory relocation). Due to lack of remote-work possibilities and family support, women usually decide to leave their jobs when their spouses are relocated.5 Some choose non-regular work because regular positions are not available. If regular-work contracts allowed flexible or shorter working hours, female non-regular workers would likely shift to regular contracts with higher wages.

7. The dual-track system pays less for female regular workers. Women entering the work force under regular contracts are often relegated to lower-paid jobs under the dual-track system—a fast track for management stream employees (career track) and a slow path for routine, clerical work (non-career track). Although both tracks are open, men dominate the former. Companies require workers to commit to their track before hiring, and limit track switching. Some companies mandate relocation as a condition for applying for the career track, discouraging those who share family responsibilities (mostly women). Women in non-career track are deprived of training opportunities and thus limited chance for promotion, resulting in lower wages compared to male peers.

8. Wage scale is largely set on the number of dependents rather than merits. The root of gender wage gap can be found a needs-based wage scale which large employers have introduced since 1946. Under a needs-based wage scale, wages are set mostly depending on the number of dependents in a typical single-earner employee’s household (63.2 percent of base wage), rather than the workers’ skills/ability (24.4 percent), location (6.8 percent) or seniority (4.4 percent). This wage scale assumed a full-time male worker as the sole bread earner. The system excluded female worker from the framework, as women were asked to leave their jobs upon marriage, or their retirement age for female workers at 28-35 years until mid-1980’s so that ‘jobs would not become obstacles to their marriage’.

9. Collateral-based lending discourages female entrepreneurship. Women could possibly seek higher income by starting up their own businesses. However, women’s entrepreneurship seems to be discouraged by limited access to finance. Women-owned start-ups have 11-14 percentage point lower probability of obtaining loans when they need credit (Higuchi and Kodama 2014). Japanese financial institutions’ over-reliance on collateral- and personal-based lending could be discouraging women’s entrepreneurship. Lower wages slow down women’s accumulation of assets that could be used as seed money. Japanese women’s weak legal position on real estate eliminates chances to use their property as collateral for start-ups. Mifune (2006) shows that nearly 80 percent of married women do not have property rights (even partially) for their residence, although nearly 50 percent of married women had contributed financially toward its purchase. Women holding property rights are concentrated among widowers, as property rights are mainly transferred through inheritance. They tend to be old or risk-averse to start a new business.

11. Japan’s ruling Liberal Democratic Party’s Tax Commission recommended in 2014 to abolish the spousal deduction which penalizes the second-earner’s income and benefits higher-income households than lower-income, or to replace with a more neutral couple deduction. However, the government raised the threshold for spousal deduction from JPY 1.03 million to JPY 1.5 million, effective January 2018.

12. Success in equalizing opportunities within the labor market hinges on comprehensive policy action. The experience of other advanced countries in undertaking tax reforms to increase FLFPR is instructive in this situation. For example, when Canada replaced a spousal tax exemption with a non-refundable tax credit in 1988, a significant increase occurred in labor force participation among women (around 10 percentage points), especially among women married to higher-income husbands (Crossley and Jeon, 2007). This was the direct result of having marginal tax rates for women that no longer depended on the (typically higher) marginal tax rates of their spouses.

13. Reform of employment contracts, and tax and social security systems is a prerequisite to raise female labor force participation and to create upward pressure on wage-price dynamics. If the spousal tax deduction is completely removed, female workers between age 20-34 is likely to increase by about 3 percentage point, and about 2 percentage point for age between 20-64. As employers provide spousal allowance, the impact of the removal of spousal tax deduction can be even larger. If all the spousal benefits are removed, married women’s labor participation rate could raise by 4.5 to 10 percentage points and their working hours could increase by 22 percent (Oishi 2003). However, the tax and social security reform alone is not sufficient.

14. More public investment in family support is required, and finding its stable financing is an urgent issue. Municipalities, especially those in metropolitan areas, are reluctant to invest in childcare facilities capacity increase, as the number of women in reproductive age will decrease in a few years. When placing the children at certified nursery schools, mothers are prioritized by criteria including their work and marital status, health and income, and whether the child has siblings. This point system puts non-regular workers at lower priority compared to regular workers, making it even more difficult for job-seekers to return to their jobs or part-time workers to seek a full-time job.

15. Societal attitudes in which males contribute to household work could be a powerful lever both to increase female labor force participation, and increase fertility. If women can get more child rearing support from their husbands, it would be easier for them to continue to work. However, with 85 percent of full-time employees working overtime, it is difficult in reality to share the childcare burdens among a working couple if both of them have regular works. Men’s commitment to house work and family responsibilities can have a significant impact on fertility. Data suggests that the more time spent by a husband in house work and childcare, the higher the changes that couples will have a second child.

16. Time limit to reverse the demographic trend is 2018. As the second-generation baby boomers (born between 1971 and 1974) will pass their reproductive age by 2018, the Japanese government is facing a very limited window to deploy sufficient childcare support policies and to conduct working style reform. Without strong and concerted efforts on multiple fronts, it will be technically impossible to turn around the declining demographic trend even if the fertility rate increases, given that the number of women in reproductive age will drop sharply after 2019.

17. Gender gaps will undermine the country’s growth potential. Gender gaps and inequality in economic empowerment between men and women in Japan is deeply rooted, and it has discouraged highly-educated women to fully contribute to economic growth and productivity. The ongoing shift in the industrial structure toward more high-technology, knowledge-intensive and service-oriented sectors will make the economic cost of gender discrimination even higher than in a traditional “blue-collar” manufacturing-based economy.

18. Work-style reform for both men and women is necessary. Providing childcare support and reforms of the tax system to reduce or eliminate the penalty on secondary income earners are necessary but not sufficient. Additional efforts are needed to change the “working style” (long working hours, workplace discrimination against women with families, low male contribution to childcare and elderly care, etc.) in Japan’s public and private sectors to simultaneously boost female labor force participation, female wages and the fertility rate. Furthermore, bringing changes in societal attitudes, so that men and women would share both economic and family responsibilities, are the key for sustainable economic and population growth. The fact that the number of women in the reproductive age will fall sharply in the next two years increases the urgency of making these changes.

The fertility rate has picked up slightly from the bottom marked in 2006 (1.26), which can be partially explained by the increase in the birth rates amongst those at the tail end of the baby boom (aged 30-39). With the continuous decline in marriage rates, and the decline in the number of women in the reproductive age, this modest rebound is expected to end by 2018.

Between April 2015 to March 2016, there were 205 suicides and 246 deaths from overwork (officially reported through workers’ compensation claim). A white paper on the ‘death from overwork’ revealed that 22.7 percent of companies have full-time staff working overtime at least 80 hours per month, a threshold which is regarded to increase health risks.

In 2015, about 60 thousand women left their workplace due to their spouses’ relocation. 40 percent of women who left their jobs at the timing of marriage answered that her husband’s relocation triggered her resignation from work.

Japan’s Population and its Composition

Employment by format and gender

(Female wage as percent of men) 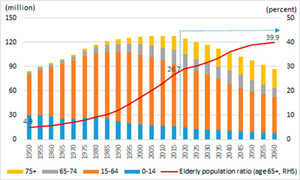 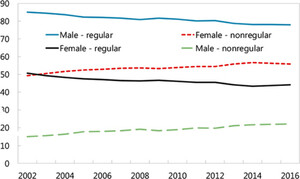 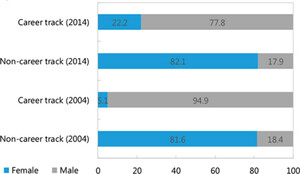 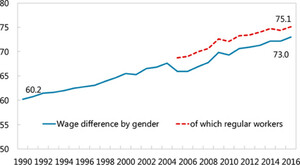 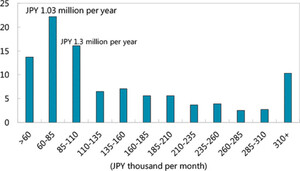