Japan faces the difficult challenge of balancing near-term fiscal support for growth with the inevitable task of reducing the overhang of public debt through medium-term fiscal consolidation—all set against the backdrop of an aging/declining population. Careful management of tax policy reform and revenue enhancement will be essential to achieving these twin objectives in a way that is growth friendly and preserves inter-generational equity. The consumption tax should remain at the heart of revenue reform, but pacing of rate increases is critical. Other potential tax measures should also be explored.

1. Japan faces the difficult challenge of balancing near-term efforts to boost consumption and growth with the need for medium-term fiscal consolidation. With gross public debt projected to exceed 240 percent of GDP in 2017 and non-social-security related government spending already contained, raising tax revenues must be at the center of efforts to reduce the primary fiscal deficit.

B. Raising the Consumption Tax

4. Model simulations confirm that raising the consumption tax rate is likely to be less detrimental to growth than other major tax options (personal income tax and corporate income tax)3. Compared to consumption tax increases, personal income tax increases result in a greater decrease in labor supply; corresponding increase in firms’ labor cost to induce more labor supply; and consequent decline in investment. Corporate income tax increases result in a shaper and prolonged drop in investment given the decline in the return to capital.

5. While the consumption tax is the best choice from a growth perspective, constrained policy space and a higher fiscal multiplier pose additional challenges for fiscal consolidation. Lack of demand support through additional monetary easing (given that Japan is already at the zero lower bound) can substantially delay recovery from the negative shock from a higher consumption tax rate. In addition, an aging society and other factors could contribute to making households more myopic and liquidity constrained—thereby raising the fiscal multiplier of a tax rate increase (Saito, 2016). Given Japan’s low potential growth of around 0.5 percent in the medium term, the path of consolidation should be gradual to avoid dampening growth momentum.

6. A gradual path for fiscal consolidation is also preferable from a cyclical management perspective. Figures below illustrate different paths of consumption tax hikes—each arriving at a 15 percent VAT rate4. A gradual increase of 0.5 percentage point every year starting from 2018 reduces the debt-GDP ratio by more than 20 percent in 2030, with the least growth volatility. An increase of 1 percentage point can achieve fiscal consolidation f aster, but with a larger impact on growth and inflation until the 15 percent VAT is reached. A larger step increase of 2-3 percentage point with a 5-year interval (in line with the authorities’ current plan) can achieve similar debt dynamics with the first scenario, but with significantly higher growth and inflation volatility. Given Japan’s weak wage dynamics, higher inflation due to a consumption tax hike on top of the BoJ’s efforts to achieve 2 percent inflation could result in a sharper-than-expected drop in real income.

Personal income tax: Reforms should focus primarily on addressing inequality and eliminating work disincentives, but can potentially contribute to revenue growth. The top rate for Japan’s personal income tax rate is currently the third highest in the OECD, but the low collection level is indicative of ample deductions in the tax framework. The current income deduction framework (which allows high income earners to enjoy larger benefits) should be replaced with more progressive and specific measures such as targeted tax credits. These reforms need to be attuned to and provide support for macro-structural reforms. For example, eliminating disincentives to full-time or regular work stemming from the spousal tax deduction remains critical. Also, reducing exemptions for pension income, while introducing targeted tax credits for elderly workers could increase incentives for the elderly to remain in the labor market. A part of revenue gains from reducing deductions, on top of the indirect positive gains from less distortionary tax systems, can potentially contribute to revenue growth.

Property tax: Japan is in the upper ranks in the OECD with respect to property tax collection (which is administered at the local level) as a share of GDP. However, in Japan, only 30 percent of local tax revenue comes from recurrent property tax, compared with 100 percent in the UK and Australia, 90 percent in Canada, 75 percent in the US, and 53 percent in France. Apart from a more stable revenue base for local governments, raising property taxes and using the extra space to reduce transfers from the center could encourage growth (empirical growth studies robustly rank property tax as the most efficient tax).

Asset/wealth tax: Very few countries currently employ wealth taxes, and many of those that have used this tax vehicle in the past have since discontinued. There have been several motivations for asset/wealth taxes, but most prominent have been their use as part of a broader commitment to income equality, and as a temporary measure in a broader fiscal consolidation effort. Those that have opted to eliminate the tax have generally cited administrative cost versus revenue collected or concerns about capital flight. However, for some countries (Switzerland, Italy, Spain) wealth taxes remain an important part of the overall tax structure or a component in a larger fiscal consolidation plan. The tax structure most compatible with an effective wealth tax is one with either zero or very few exemptions, a high threshold of liability, and a flat marginal rate that is set at a low level. For Japan, inequality may only be a moderate consideration for a wealth tax, given relatively low (albeit rising) Gini coefficients after redistribution. Capital flight (for tax avoidance) could also be a concern. The administrative cost of such a tax relative to potential collections could also be a difficult hurdle to pass (in India, for example the wealth tax was replaced with a 2 percent surcharge on incomes above a given (high) threshold—resulting in a substantially higher level of collection. However, there are some potential arguments in favor of a wealth tax from a productivity standpoint. The tax rate on capital income is relatively low in Japan, resulting in lower marginal tax rate for high income individuals. But, higher capital income taxation would raise burden on entrepreneurs who are more productive (and generate more income). Under wealth taxation, entrepreneurs who have similar wealth levels pay similar taxes regardless of their productivity—thus the tax burden would shift from productive entrepreneurs to unproductive ones if capital income tax were replaced with a wealth tax, potentially boosting productivity but increasing inequality (albeit amongst the wealthy) (Chen and others (2015)).

Simulations were performed with the 6-region version of Global Integrated Monetary and Fiscal (GIMF) model with the version described in Anderson and others (2013). 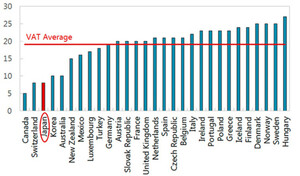 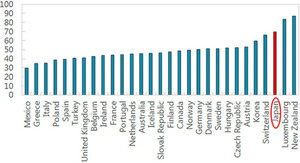 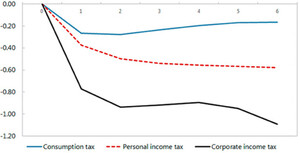 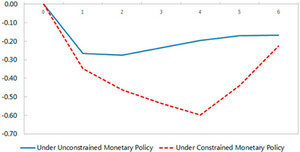 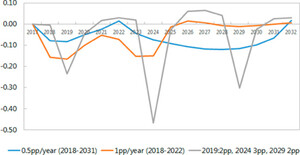 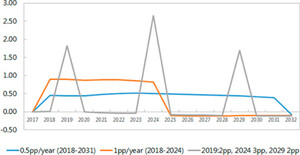 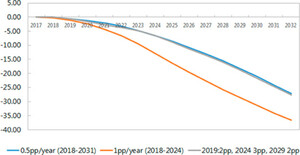 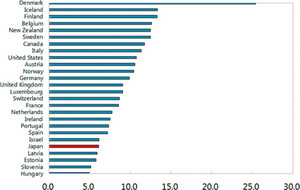 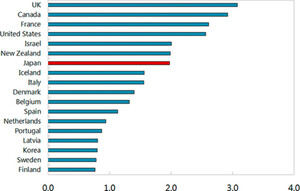 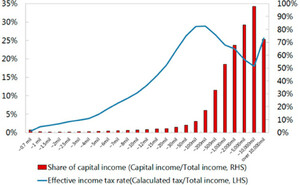