For the 2015 Paris Agreement on climate change, the European Union (EU) pledged to reduce greenhouse gas (GHG) emissions by at least 40 percent below 1990 levels by 2030. Policies envisioned to achieve this goal include: tightening the Emissions Trading System (ETS) covering large emitting firms; requirements for energy efficiency, vehicle CO2 emission standards, and renewables; and policies to meet national-level targets for small-scale emissions sources outside of the ETS. This note analyses various refinements to the envisioned policy package that might meet the 2030 commitments with lower costs and greater fiscal and domestic environmental benefits (though implications for energy security are not considered). The results suggest potential economic and fiscal benefits from greater reliance on emissions pricing—for example, replacing tighter energy efficiency regulations with a higher ETS emissions price and use of carbon taxes (or tax-like instruments) for emissions outside the ETS sector. Other options, such as equating carbon charges across sectors and across countries, yield some economic benefits at the EU level, but do not raise revenue and, without compensating measures, impose uneven burdens across countries.

1. The EU is in the vanguard of climate mitigation policy. The EU launched the first ETS for GHGs in 2005 and submitted an ambitious pledge for the Paris Agreement to reduce GHG emissions at least 40 percent below 1990 levels by 2030. Various targets and objectives support this pledge, including reducing large-scale (e.g., power and industrial) emissions sources that are currently about half of EU emissions by 43 percent below 2005 levels by 2030 and reducing small-scale emissions (e.g., from vehicles, buildings) by on average 30 percent below 2005 levels by 2030. The European Commission’s (EC) latest proposal also includes energy efficiency goals (at least a 30 percent improvement by 2030) and EU renewables target (at least a 27 percent share in gross final energy). EU member states are responsible for meeting country-specific targets for non-ETS emissions sources—which are more stringent for higher-income states—and to contribute to EU energy efficiency and renewable targets, though country-level targets for renewables are not yet set for 2030. Envisioned policy instruments for meeting the various targets include progressively tightening the EU ETS for large-scale emissions sources,2 EU regulations for new vehicle CO2 emissions, various energy efficiency standards and policies, as well as various national-level policies, like carbon taxes for non-ETS emissions, as in Ireland and France.

2. There may be refinements to existing policies that meet emissions goals with lower economic costs and greater fiscal and domestic environmental benefits. Policy options considered here (as sequential adjustments from the currently envisioned policy package) include:

3. Reforms would require a mix of actions at national and EU level, and in some cases would involve coordination challenges. Taxation is an area of shared competence—national authorities may legislate where the EU has not exercised its own competence and, even where the rules have been harmonized at EU level, countries usually have a number of options at their disposal. Nevertheless, the current EU legal framework poses certain limitations for introducing reforms (ii) and (v) in full. Relying less on EU vehicle CO2 emission standards would require stronger policies from EU member states to meet their national-level targets for the non-ETS sector. The EC’s proposed regulatory approach to reduce vehicle emissions may, however, provide more certainty over emissions outcomes, more directly addresses possible obstacles to adoption of fuel-saving technologies, and avoids the high fuel taxes otherwise needed to achieve CO2 emissions reductions from transportation.4 At the same time, the analysis in this paper shows it could be in countries own interest to rely more on fuel taxes than vehicle CO2 emission standards, since there are cost savings and fiscal revenue benefits.

4. Policy options were evaluated using a flexible spreadsheet tool.5 The model starts with data on fuel use by sector and by country and projects this forward (using GDP projections and assumptions about income elasticities for energy products, rates of technological change, and future energy prices) in a ‘business as usual’ (BAU) scenario, with current mitigation policies frozen. An ‘envisioned policy’ reference case is then developed with a simplified representation of the ETS, regulations (represented in the model by ‘shadow prices’) to meet energy efficiency, vehicle emission rate, and national-level targets for non-ETS emissions. Policy impacts are calculated using assumptions about fuel price responsiveness and the air pollution mortality, road congestions, and other local environmental effects associated with fossil fuel use. 6, 7 The model incorporates the 19 largest emitters in the EU with the focus on 2030, the target year for meeting the Paris emissions pledge, considering that policies to 2020 are already set.

5. While the model is simplified, it approximates the results of more detailed models. The model readily accommodates a wide range of policies, countries, parameter scenarios, and computations of economic welfare impacts—gross costs and costs net of domestic environmental benefits. This helps to guide efficient policy design and motivate further analysis with more detailed models, such as those used by the EC. For given long-run impacts of policies on fossil fuel use, the environmental, fiscal, and economic welfare impacts predicted by the model should roughly approximate those from more complex models, though there may be differences depending on assumptions and modeling choices.8 Considerable uncertainty surrounds BAU projections and policy impacts (e.g., policy costs could be significantly lower with more rapid advancement of clean technologies), but the broad ranking of reform possibilities is robust to alternative assumptions. The model does not, however, include benefits from mitigating global climate change—which could be substantially more than the economic costs of mitigation measures—or greater energy security.

6. Currently envisioned policies reduce EU (energy-related) CO2 emissions 36 percent below BAU levels in 2030—consistent with meeting the Paris pledge target—but have negligible fiscal benefits (Figure 1a and b). The ETS contributes most (14 percentage points) to CO2 reductions, followed by various policies to improve energy efficiency in the household, industrial, and power sector, while vehicle CO2 standards have a relatively modest effect. On net, fiscal benefits of the envisioned policy package are small (0.04 percent of GDP)—revenue from partial auctioning of ETS allowances is largely offset by erosion of road fuel tax bases from the increased fuel efficiency of vehicles that meet the vehicle emissions standards.

8. Implementing the alternative policy refinements considered here to achieve the same level of EU CO2 emissions reduces costs in 2030 by 0.8 percent of GDP (or €160 billion). The largest cost reductions (0.4 percent of GDP—see Figure 2a) are from reducing ETS emissions through emissions pricing alone, rather than a combination of regulations and lower emissions prices. Relying on carbon taxes (or similar pricing instruments) for reducing vehicle and other non-ETS emissions reduces costs more modestly (by 0.1 percent—the bottom two policies combined in Figure 2a). Imposing the same carbon tax (or price) for non-ETS emissions across countries and across the ETS and non-ETS sectors each generate cost savings of about 0.15 percent each at the EU level, but, without compensation, the costs and benefits from harmonization of emissions prices would be unevenly distributed across countries. Domestic environmental benefits from all the reforms are smaller than the cost savings, amounting to about 0.1 percent of GDP.

10. Measures would be needed at the national level to help vulnerable groups adjust to higher energy prices.9 Transfers to compensate low-income households would use only a fraction of the fiscal revenues that could be generated by the alternative policies discussed here, as most of the burden of higher energy prices is borne by households that are not in the bottom income quintile. Measures—such as worker assistance programs and transitory tax relief, for example—may also be needed partially mitigate the impact on energy-intensive firms competing in global markets. A particular concern is the potential for “carbon leakage”—where more carbon emissions intensive industries shift production outside the EU to avoid carbon pricing measures—and the related loss of EU industrial output. Such concerns need to be taken into consideration when designing policies

11. In sum, greater reliance on the ETS and carbon taxes or similar pricing instruments for other emissions sources generate the largest cost savings, and revenues, respectively. In contrast, the smaller economic benefits from equating emissions prices across countries and sectors, potential revenue losses, and redistributive effects (e.g., lower income countries would need compensation for higher non-ETS emissions prices given their less stringent targets for this sector), suggest any moves in this direction should be carefully considered before proceeding.

Prepared by Ian Parry, Victor Mylonas, and Nathaniel Arnold. The authors would like to thank staff of the European Commission for helpful comments. The figures below are based on ongoing work that will be included in a forthcoming IMF working paper containing country-specific findings.

Under the ETS, or cap-and-trade system, entities are required to surrender allowances to cover their emissions where the quantity of allowances is fixed at the EU level and trading among firms establishes a market price for allowances or emissions. At present, about half of the allowances are given away free to firms and half are auctioned.

Prior EC studies (EC, 2011 and EC, 2016a) have found that a combination of regulatory and pricing measures would be needed to put the transport system on a sustainable path, lowering CO2 emissions, oil dependency and congestion. Ongoing IMF work will attempt to reconcile these findings with the model results presented here.

For example, a typical assumption is that each 1 percent increase in a fuel price reduces consumption of that fuel by 0.6 percent, with two-thirds of the response due to implicit adoption of more efficient technologies and one-third reduced use of products requiring that fuel.

In particular, EC (2016b) provides state-of-the-art modelling on the impact of policies as adopted by end-December 2014. For the impact of prospective policies, the Impact Assessments accompanying the Clean Energy for All Europeans Package provide additional information.

Unlike regulations, pricing instruments involve a first-order transfer of revenue (e.g., to the government) which is reflected in higher energy prices.

Impacts of Envisioned Policies for 2030 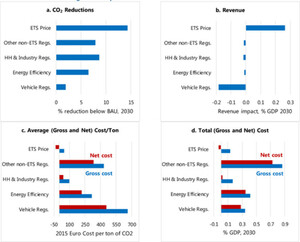