Can Structural Reforms Foster Real Convergence in the Euro Area?1

1. There has been a secular decline in productivity across all advanced economies. This decline occurred even before the global financial crisis because of several factors. First, aggregate productivity declined due to the reallocation of resources toward sectors where productivity growth was slower, and declining productivity growth within sectors which accounted for the bulk of employment and economic activity (Dabla Norris and others, 2015). Second, structural headwinds—from an aging workforce, slower human capital accumulation and slowing trade integration—also contributed to the decline in productivity (Aiyar and others, 2016; IMF 2016a). Finally, in the aftermath of the global financial crisis, some euro area countries have displayed persistent productivity losses stemming from weak corporate and bank balance sheets; adverse feedback loop of weak aggregate demand, investment and capital-embodied technological change; and elevated economic and policy uncertainty (Adler and others, 2017).

2. In addition, there have been significant and persistent productivity differentials across countries in the euro area. These productivity differences pre-dated, but were aggravated by, the global financial crisis and took place against the background of the wider long-term slowdown of productivity in all advanced economies (as noted above).

3. The persistent differences in productivity led to the lack of real income convergence within the euro area (based on Schoelermann (forthcoming), ECB 2015, ECB (forthcoming), Franks and others, (forthcoming)).3 Before the global financial crisis, there was steady income convergence in the period leading up to the introduction of the euro. After the euro was introduced, convergence stalled, followed by divergence starting with the global financial crisis. At the same time, countries that joined the euro area from 2007 onwards experienced continued convergence in the run-up to their accession.

5. The analysis focuses on three model specifications to assess how productivity at the country and sector level responds to country- and sector-specific reforms.

where pi,t+h is the natural logarithm of real hourly labor productivity (defined as real value added divided by total hours worked from the Penn World Tables dataset) in the country i in year t+h. The model 1 is estimated at each yearly horizon h = 0, 1, …, 5. The variable Ri,t is a binary variable which captures the occurrence of a structural reform at time t. The reform can be a product market (PMR) or an employment protection legislation (EPL) reform. Control variables X include the lagged hourly productivity level (in natural logarithm), and contemporaneous and past crisis dummies (defined as annual growth below −3 percent). The crisis dummies help control for the cyclicality of productivity changes within countries as they recover from a crisis. These variables also help ensure that the estimated effect of reforms on productivity growth is not contaminated by the correlation between reforms and cyclical developments as illustrated in IMF 2016b. The model also controls for country and year fixed effects (ui, γt) to account for country-specific unobservable factors and common shocks to all countries, respectively.

where the subscript s denotes the sector, c the country, and t the year.6 psc,t+h is the natural logarithm of real hourly labor productivity in constant euros observed in sector s (defined as real euro value added divided by the total number of hours worked by employees engaged in sector s in country c in year t+h). The model controls for a rich set of sector-cum-country fixed effects to account for time-invariant factors that are specific to sectors belonging to different countries such as the size of sectoral employment, sector*country and year fixed effects.

8. Model 3: Sector-specific reform, sector-specific productivity effects. The availability of disaggregated sectoral data makes it possible to identify the impact of sector-specific reforms on sector-specific productivity growth. For example, given the availability of the sectoral EUKLEMS data, it is possible to assess the extent to which a reform shock at the sectoral level (such as, the reduction in the number of licenses needed to engage in retail trade, or the reduction in the regulations pertaining to the professional service sector) influences the productivity growth of the retail trade and professional services sectors. The main caveat surrounding this analysis would be the high risk of endogeneity associated with the sector-specific reform as this reform is more likely to be triggered by expected productivity gains in the sector. The model takes the following form where the unit of observation becomes the country and the reform impact is estimated for a given sector. The model controls for the log of employment in the specific sector and country and year fixed effects.

9. Reform measures. Equations [1] and [2] are estimated using a new narrative-based dataset of major labor and product market reforms that was used in IMF 2016b and Adler and others (2017), and will be published in Duval and others (forthcoming). An important advantage of this database is that it identifies the precise nature and timing of major legislative and regulatory actions taken by advanced economies since the early 1970s in key labor and product market policy areas.7 8 Equation [3] is estimated using sector-specific reforms drawn from the OECD database. Sector-specific reform measures are only available for product market reforms and not labor market reforms.

10. Labor productivity. Equation [1] is estimated using country-level data on labor productivity drawn from Penn World Tables. This data is in international PPP terms, therefore allowing cross-country comparisons in the levels of productivity. Equations [2] and [3] are estimated using the 2016 release of EUKLEMS sectoral data by the European Commission which provides a rich source of information on labor productivity but also employment and other macro variables that are critical to assessing sectoral performance. The sectoral-level data are available for a set of 11 countries (Austria, Belgium, Finland, France, Germany, Italy, Spain, Sweden and the United Kingdom) for 1995–2014. Unlike the country-level productivity data from the Penn World Tables, the EUKLEMS data is not PPP adjusted. While this may bias the results somewhat, the bias is limited by controlling for sector-country fixed effects. This is because the gap between PPP and non-PPP adjusted labor productivity at the country level is relatively constant over time for a specific country, suggesting that the gaps between PPP and non-PPP adjusted sectoral labor productivity might also be constant over time for a given country, and thereby absorbed by the fixed effects.

11. While the structural reform priorities in euro area countries are wide ranging, the analysis below focuses on employment protection reform and product market reforms. These reforms boost flexibility in the labor market and facilitate the efficiency and the entry exit of firms respectively. The role of product and labor market deregulation in fostering output and productivity growth is well documented (e.g., Adler and others, 2017; Bouis, Duval and Eugster, 2016; Nicoletti and Scarpetta, 2005). The productivity boost arises because such reforms can facilitate the diffusion of technology and innovation across companies, increase the incentives to innovate, and improve resource allocation by weeding out less productive firms and workers (OECD, 2015). The analysis can, in principle, be expanded to include additional reforms.

13. Differences in product market efficiency and flexibility have persisted across euro area countries. The gaps in the overall OECD index of product market flexibility (PMR) have closed significantly over time (text figure), and especially after the crisis, in part due to the important role of EU-legislated reforms in network industries. However, at a more granular level, the gaps in the professional services sector regulations and business climate have marginally narrowed but not closed (Figure 5, right panel), whereas the gaps in the retail trade sector have widened as reforms appear to have occurred in the better performing countries (Figure 5, left panel).

15. The marginal return from reforms is higher for countries or sectors that are further away from the productivity frontier. The intuition for these results is as follows. Since low productivity countries tend to also be those that exhibit significant resource misallocation, there is greater scope for reforms to move factors of production toward the most productive sectors. Moreover, reforms which facilitate the entry of productive workers and firms and the exit of less productive workers and firms may be disproportionally beneficial in low-productivity countries. This is because such reforms would allow the most productive firms to attract the most productive workers, while providing incentives for boosting innovation—including through greater investment in technology and human capital—in the face of stronger competition. Finally, empirical evidence suggests that countries with large labor market rigidities (and therefore low productivity) tend to have a higher probability and intensity of labor market reform when compared to countries with low labor market rigidities (Ebeke, 2017). All these factors may help explain why reforms are likely to be stronger in countries in need of a bigger supply-side boost.

16. Policy implications. Labor and product market reforms need to be implemented in all euro area countries to reverse the long-term secular decline in productivity and facilitate adjustment to challenges from technological innovation. These reforms are especially important in countries with low initial productivity levels such as Greece, Italy, Portugal and Spain because the productivity effects of reform are likely to be greater in these countries, allowing them to catch up with the higher productivity euro area countries. By helping to narrow productivity differences, reforms will help reduce productivity and competitiveness gaps, reduce current account imbalances and foster real convergence. Reforms should also be accompanied by measures to improve labor force participation and address the crisis legacies of weak balance sheets and economic and policy uncertainty (Adler and others, 2017).

See Schoelermann, H. (forthcoming) for a detailed analysis of real income convergence in the euro area.

In the absence of data on TFP levels, the following analysis focuses on labor productivity developments.

In this study, sectors are based on the highest level of aggregation provided in NACE Rev. 2 classification and do not include the financial sector (identified by the letter K).

The database identifies all legislative and regulatory actions related to product market regulation and employment protection legislation mentioned in OECD Economic Surveys. For any of these actions to qualify as a major reform or “counter-reform”—namely a major policy change in the opposite direction—one of the following criteria has to be met: (1) the OECD Economic Survey uses strong normative language to define the action (e.g., “major reform”); (2) the policy action is mentioned repeatedly across different editions of the OECD Economic Survey; or (3) the OECD indicator of the regulatory stance displays a very large change (in the 5th percentile of the distribution of the change in the indicator). Consequently, the EPL reform dummy takes values {1; 0; −1}, denoting a deregulating reform, absence of a reform, or a reversal of a reform. For PMR, the analysis focuses on major deregulation in seven network industries and the PMR reform dummy takes value of 1 if there were at least two reforms over three years in one or more of the seven network industries (airlines, gas, electricity, postal services, rail, road transportation, and telecom) and 0 otherwise.

The reform dummy captures only reforms that are sufficiently large. As a robustness check, a forthcoming working paper on this topic will assess the impact of the actual size of reforms. Ebeke (2017) shows that countries with high initial levels of employment protection—and thereby low initial levels of productivity—tend to have a higher probability of big labor market reforms.

Effect of Product Market Reforms on Labor Productivity in Europe 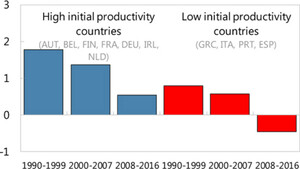 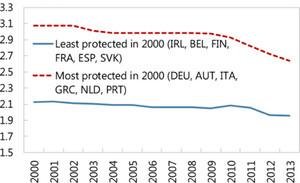 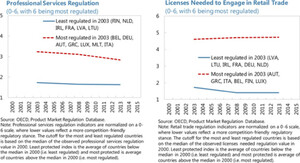 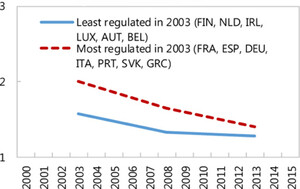 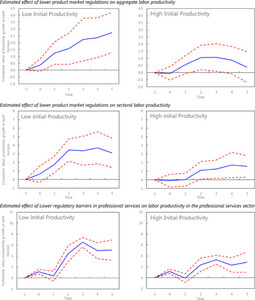