Macroprudential Tools at Work in Canada1

1. The aim of this paper is to assess which macroprudential policy measures have been effective in containing house price and mortgage credit growth in Canada and other economies. Our analysis indicates that macroprudential policy measures have had a moderating effect on house prices and mortgage credit in Canada since 2010. International experience suggests that lower caps on debt-service-to-income (DSTI) ratios and loan-to-value ratios could be effective in containing both mortgage credit and house price growth.

A. Assessing the Effectiveness of Macroprudential Measures in Canada

3. A distinctive feature of Canada’s prudential toolkit stems from a large government role in mortgage insurance. More than a half of outstanding mortgage debt is covered by mortgage insurance due to a requirement that borrowers must obtain insurance for high loan-to-value (LTV) mortgages (with LTV over 80 percent). 2 Government-backed mortgage insurance is provided by the Canada Mortgage and Housing Corporation (CMHC) - a crown corporation with half the market share of new insured mortgages3 - and two private companies. The government guarantees 100 percent of CMHC’s obligations and backs private mortgage insurers’ obligations subject to a deductible equal to 10 percent of the original principal amount of the mortgage loan. To address risks associated with the provision of these guarantees, the government sets eligibility requirements for insured mortgages. This serves as an important macroprudential tool in addition to traditional macroprudential tools available to the regulators responsible for financial stability.

5. Our analysis focuses on macroprudential policy measures related to changes in mortgage insurance rules during the tightening stage. Here we distinguish six rounds of macroprudential measures introduced in 2008, 2010, 2011, 2012, early-2016 and late-2016 (Table 1). We did not include the increases in mortgage insurance premia in 2014 and 2015 into our empirical exercise as the changes were too small to have an impact on credit demand.4

6. We estimate two separate equations, for mortgage credit and house prices, assuming that macroprudential measures affect house prices indirectly through the mortgage credit. Each equation is estimated separately using OLS.5 All variables are monthly in a sample from August 1998 to February 2017.

7. For mortgage credit growth, we estimate the following specification:

Xt is a matrix of control variables including the unemployment rate and hourly wage growth, five-year mortgage interest rate,6 and house price growth. The control variables enter the equations with lags to account for delays in the response of mortgage credit to changes in the explanatory variables.

Dti stands for a dummy variable equal to 1 in the months following the implementation of a set of macroprudential measures i (2008, 2010, 2011, 2012, and two 2016 rounds) and zero otherwise. To isolate the effects of individual rounds of measures, each dummy variable takes a value of 1 until the end of the sample. We assess the impact of the rounds of measures on mortgage credit using the entire sample, but also test the impact over 1, 3, 6, and 9 months after they were introduced, and for the whole period between rounds.7

Separately, we test the effectiveness of individual measures and replace the dummy variable in specification (1) with changes in a specific instrument, such as the maximum LTV ratio for new and refinancing loans and amortization period.

8. For house price growth, we estimate the following specification:

Yt is a matrix of lagged control variables including the growth rate of the number of completed but unsold houses, mortgage credit growth, nominal GDP growth, and growth of sales of existing houses.8 The control variables enter the equations with lags to account for the delay in the house price response to changes in their determinants.

9. The estimated specification (1) suggests the following effectiveness of the individual rounds of macroprudential measures (Table A3):

12. The household debt to income ratio would have likely been even higher had the authorities not acted. We calculate the fitted regression values of mortgage growth rates both with the measures and without them. Other things being equal, without these measures the average mortgage credit growth since April 2010 would have been higher by more than 5 percentage points. The household debt-to-income ratio would have been closer to 200 percent as of the third quarter of 2016, instead of the actual 167 percent.

13. Economies around the world have used a variety of policy tools to deal with house price and mortgage credit booms. These include traditional monetary and fiscal policies, including transaction tax, property tax, sellers’ and buyers’ duty (Crowe et al., 2011 and Dell’Ariccia et al., 2012) and other macroprudential measures (see Appendix in Lim and others (2013)). Caps on LTV, and the DSTI ratio, provisioning requirements and risk weights are among the most frequently used tools.14

14. We update the macroprudential dataset in Lim and al. (2013) and examine the international experience over 2000–16 with four most frequently used measures: limits on LTV ratios; caps on DSTI ratios; greater risk weights for banks’ credit assets; and higher provisioning requirements for banks. We estimate their impact on mortgage credit and house price growth with panel data regressions across a sample of 35 economies controlling for the business cycle and the cost of borrowing.15

Economies in the Dataset

Economies in the Dataset

For mortgage credit growth, we estimate the following specification:

D stands for an MPP measure. Following Krznar and Morsink (2014), we use a “step function variable” for each macroprudential instrument, that is, a variable that increases (decreases) by one every time the instrument is tightened (loosened) and stays there until the instrument is changed. For house price growth, we estimate the following specification:

D stands for an MPP measure, constructed as a “step function variable”.

We use GMM Arrellano-Bond estimator, which is designed for the situations with fixed individual effects and explanatory variables that are not strictly exogenous.16

15. The results suggest that all four measures can be effective in containing mortgage credit growth (Table A6). The economies that lowered the caps on the LTV and DSTI ratios, tightened provisioning requirements or raised risk weights for banks’ credit assets moderated the mortgage credit growth rate on average by 0.9-2 percentage points.

17. Canada’s macroprudential policy seems to have lowered mortgage credit growth thus moderating the surge in house prices on a national basis. The 2010, 2011, 2012 and late 2016 rounds of measures are estimated to have been effective, possibly due to their larger scope and size.

18. International experience over 2000-16 suggests that tighter LTV limits and lower caps on DSTI ratios could be effective in moderating both mortgage credit and house price growth. Canada’s DSTI limits are relatively stringent compared to the other economies, but the limits on the LTV ratio are above the average in our sample of economies. Further tightening of the LTV ratios could help contain growth in mortgage credit and house prices.

In Ontario, provincially-regulated credit unions are also required to have mortgage insurance in cases where the LTV exceeds 80 percent. Mortgages with LTV ratios of 80 percent or below (“low LTV” or low-ratio mortgages) may also be insured on a portfolio basis.

Given that the annual mortgage credit growth rate is regressed on monthly data, the estimated effect of macroprudential measures could be muted on impact and increase overtime,

This follows Peterson and Zheng (2011). Igan and Kang (2011) also use similar specifications for Korea.

The government set a minimum down payment of 5 percent for insured loans, but “cash backs,” unsecured borrowing and gifts could have been considered part of the down payment.

CMHC (2011) suggested that the volume of refinance loans dropped by 22 percent following the 2011 measures. Dunning (2012) estimated that the 2011 measures would push debt-service ratios above the maximum limit for about 6 percent of the high LTV mortgages taken out during 2010. He also suggested that about 11 percent of the borrowers in 2011 would have not been able to access credit following the latest reduction of the maximum amortization period.

OSFI’s B-20 guideline stipulates that banks should make reasonable efforts to determine if down payment is sourced from the borrower’s own resources or savings. CMHC (2012a) indicates that 35 percent of households who purchased a house in 2011 were first-time borrowers and about 15 percent of them borrowed at least part of the down payment.

Dunning (2015) suggests that only a small minority of home buyers (2 percent) and mortgage borrowers were affected and for most of them the additional required down payments were relatively insubstantial.

The regressions broadly follow the approach in Arregui and others (2013).

Given the challenges associated with finding valid instruments, we also estimated the same specifications using fixed effects models that produced generally consistent results (except for the coefficient for provisioning that lost significance in the mortgage credit growth equation). 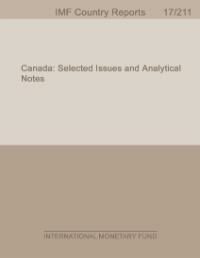 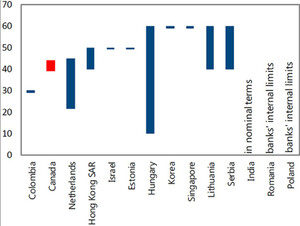 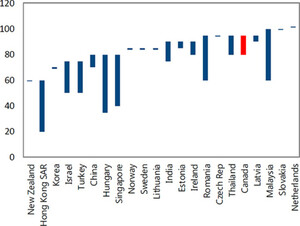 Powered by PubFactory
Close
Table A7.

*,**,*** indicate respectively statistical significance at the 10, 5, and 1 percent level. Standard deviations in italic.