A Medium-Term Fiscal Anchor: Managing Debt as Public Investment is Scaled Up1

1. The Policy Support Instrument (PSI) began in mid-2013 in a relatively low risk environment. Central government debt was assessed to be approximately 26 percent of GDP. Following receipt of debt relief in the mid-2000s, debt had risen around 7 percentage points of GDP to this level, but all external debt was on concessional terms.

2. The program involved ambitious public investment, with new infrastructure expected to be accompanied by robust growth. Public investment was projected to be 10 percent of GDP each year of the program period, roughly the same as recurrent expenditure. Major hydro power projects would involve non-concessional borrowing, raising the interest bill, but the impact on debt was expected to be offset by robust growth, projected to increase from 5 percent in FY2012/13 to 7 percent by FY2014/15.

3. Growth, domestic interest rates and the exchange rate were subject to adverse shocks over the program period, but these shocks were offset by better than expected external borrowing rates. Growth fell short of expectations, reflecting drought, election-related disturbances and rigidities in the banking system which constrained credit (Figure 1).2 Growth averaged around 5 percent over FY2013/14-FY2015/16. There was a significant exchange rate depreciation in 2015 (Figure 2) and effective interest rates on domestic government debt were higher than expected (Figure 3). By contrast, effective interest rates on external debt were slightly lower than expected (Figure 4).

4. Overall, government debt rose by 9 percentage points to 35.7 percent of GDP in FY2015/16 as projected. Primary deficits increased over the program period and were somewhat worse than expected over 2013-2014, but under-execution of the development budget resulted in smaller than expected deficits in 2015-2016 (Figure 5). Recurrent expenditure exceeded projections over the period, particularly in the election year of FY2015/16 (Figure 6). However, this was outweighed more recently by under-execution of the development budget. Development expenditure over FY2012/13-FY2015/16 was 85 percent of what was projected when the program began. This reflected weak execution of the externally financed development budget.

5. The authorities seek to balance risks to debt sustainability with the need for debt-financed public investment to fill large infrastructure gaps. The overarching aim is to ensure public debt remains sustainable, ideally retaining an overall rating of low risk of debt distress under the IMF-World Bank Debt Sustainability Framework (LIC DSA). In order to achieve these objectives, the authorities are committed to adhering to Uganda’s Charter of Fiscal Responsibility adopted in 2015, which embodies a ceiling on public debt of 50 percent of GDP (in net present value terms) and requires the overall deficit to be reduced to 3 percent of GDP by FY2020/21.

7. Risks to the baseline debt projection are likely tilted to the downside. Debt will be higher than expected if growth fails to recover as projected (perhaps due to poor quality project execution)4 and if interest rates are higher than expected (due to greater reliance on non-concessional borrowing). Unexpected exchange rate depreciation can also increase the domestic currency value of debt. Under-execution of the externally financed development budget can imply lower than expected borrowing, but this may come at the expense of lower growth.

8. Fan charts can capture uncertainty around baseline debt forecasts. They represent potential trajectories for debt, corresponding to different possibilities for growth, exchange rates and interest rates, that may differ from the baseline forecast. These different possibilities are obtained by drawing shocks from a joint normal distribution of macroeconomic and fiscal variables, calibrated based on historical volatility of these variables. These shocks are added to the baseline forecasts.

9. Fan charts indicate that the risk of debt deviating from its projected path are approximately the same as at the commencement of the PSI in 20135. This can be seen by comparing the two ‘fans’ in Figure 7. The left-hand side fan is constructed as of end FY2012/13, based on data up to that point and also initial PSI projections. The right-hand side fan is constructed using data up to end FY2015/16, along with current baseline projections. The upward sloping black line in the middle of each fan corresponds approximately to the PSI projection (for the left fan) and the baseline IMF projection (for the right fan). The width of the right-hand side fan after three years (i.e. 2019) is only slightly larger than the width of the left-hand side fan in 2016. The probability of debt deviating from its projected path by any given amount over the next three years is assessed to be approximately the same as it was in FY2012/13 when the PSI commenced. This indicates that the fiscal slippages and shocks to growth, interest rates and the exchange rate experienced since 2013, while not trivial, have not been significantly different to pre-2013 shocks to increase the likelihood that debt deviates from its projected path.

10. Despite no significant increase in uncertainty about future debt outcomes around a projected path, there is now a greater risk of debt reaching levels above 50 percent of GDP because of shocks or slippages, given that debt is now at a higher level than when the PSI commenced. In Figure 7, the left-hand side chart indicated that in FY2012/13 there was effectively zero probability over the PSI period of debt reaching 50 percent of GDP. However, the fan chart constructed using data up to FY2015/16 begins at a higher debt level and is centered around a baseline debt projection that reflects rising debt due to continued public investment scaling up. Figure 8 extends this fan chart to FY2021/22. This reveals that there is now a small probability that debt will reach levels of around 50 percent of GDP by the end of the medium term. Scaling up of public investment has brought debt closer to the 50 percent level, so that adverse shocks have the potential to drive debt closer to this level over the medium term.

11. The authorities have committed to a Charter of Fiscal Responsibility to anchor fiscal policy. The Charter requires keeping government debt below 50 percent of GDP in net present value terms and achieving an overall fiscal deficit of no more than 3 percent of GDP in FY20/21—consistent with the EAC convergence criteria for monetary union6.

12. Adopting the baseline debt projection shown in Figure 8 (curved black line) as a debt ceiling will help the authorities adhere to the Charter of Fiscal Responsibility (CFR), by providing a buffer in the event of adverse shocks. Under the baseline, debt remains below 43 percent of GDP over the medium term, well below the ceiling in the CFR and also the DSA benchmark for total public debt7, helping to ensure that Uganda remains at low overall risk of debt distress. If debt deviates from the projected path because of over-budget spending, or exchange rate shocks / realization of contingent liabilities etc., higher fiscal balances will likely be required to bring debt back to manageable levels.

13. The baseline debt projection is consistent with scaling up public investment in the near term, but also reflects a projected reduction in the size of deficits to 3 percent of GDP by FY20/21, requiring ongoing improvements in revenue collection. Non-interest current expenditure is projected to remain unchanged over the medium term (as a percentage of GPD), while conservative assumptions are made about interest rates. Reducing the deficit to 3 percent of GDP by FY2020/21 will require annual revenue increases of ½ percent of GDP per year, as well as reduction of public investment from the near-term peak of 11 percent of GDP to 9 percent of GDP as major infrastructure projects (e.g. in hydro power) are completed.

One quarter of projected investment is to be financed externally on non-concessional terms.

Baum and others (2017) describes the methodology used to produce the fan charts.

The DSA benchmark for total public debt is in present value terms. 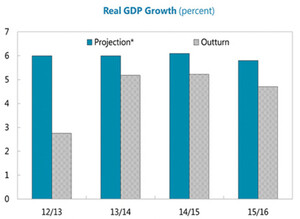 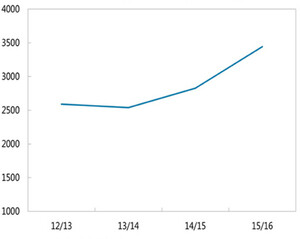 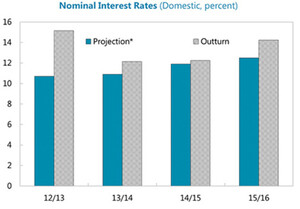 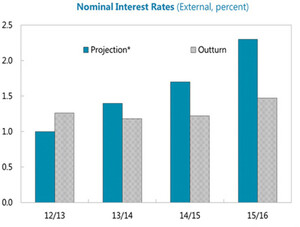 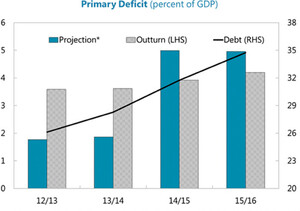 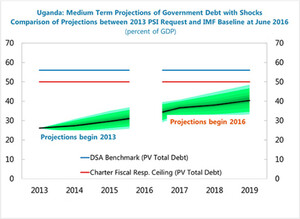 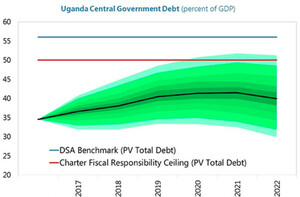