Under Article IV of the IMF’s Articles of Agreement, the IMF holds bilateral discussions with members, usually every year. In the context of the 2017 Article IV consultation with Guyana, the following documents have been released and are included in this package:

Background: Economic activity continued to expand but growth was uneven. In 2016, subdued agricultural commodity prices, adverse weather conditions and delays in public investment led to a contraction in non-mining sectors. Nevertheless, GDP increased by 3.3 percent buoyed by very large increases in gold output. Increased exports of gold and improved terms of trade helped the current account achieve a surplus of 0.4 percent of GDP from a 5.7 percent deficit in 2015. Guyana is expected to become an oil producer by mid-2020.

Focus of the discussions. Discussions focused on policies to preserve macroeconomic and financial stability and promote broad-based and inclusive growth.

Prepared by the staff of the International Monetary Fund in consultation with the World Bank Staff.

Nevertheless, stress tests indicate the vulnerability of public debt to adverse shocks. There are small breaches of the external debt threshold (within the borderline band) under a stress test shock to debt concessionality, suggesting a borderline moderate/low rating. An alternative approach that models the probability of debt distress shows a larger breach of threshold, which lends support to a moderate risk rating.

The medium-term outlook is favorable given the expected start of oil production by 2020. Guyana has ongoing negotiations with bilateral non-Paris Club and commercial creditors who did not participate in the Heavily Indebted Poor Countries (HIPC) Initiative with a view to settling these debts (about 5 percent of GDP). A positive outcome of the negotiations could help further reduce its external indebtedness. 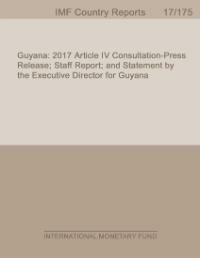