This note examines Costa Rica’s infrastructure main challenges and possible solutions going forward. To boost potential and inclusive growth, Costa Rica needs to address inadequate investment and other logistical shortcomings to ensure a more efficient integration into international supply chains. Although CRI has made significant progress in terms of business sophistication and innovation, large gaps exist in infrastructure, institutions and market efficiency. Costa Rica’s accession process to the OECD provides an opportunity to implement best practices in terms of institutional arrangements that can help tackle these shortcomings. The authorities need also to address fiscal vulnerabilities, not least to make room for a well-focused and high-quality investment in infrastructure.

A. Lacking Infrastructure Weighs on Competitiveness

1. Costa Rica remains one the most competitive countries in Latin America, however, there are factors holding back the country’s growth potential, notably infrastructure. According to the Global Competitiveness Report 2016-17, CRI fell slightly to 54th rank, only behind Chile (33th), Panama (42nd), and Mexico (51st). In particular, CRI leads the region in health and primary education (35th), and is second only to Chile (28th) in higher education. In addition, Panama and Costa Rica lead the region in business sophistication and innovation. Nevertheless, market size, macro environment, and especially infrastructure show the largest gaps compared with the best world performers.

2. Indeed, inadequate supply of infrastructure hinders doing business in Costa Rica under almost all dimensions (WEF 2017). Costa Rica ranks 106th in the quality of overall infrastructure, 13 positions behind the top performer Barbados (out of 21 assessed LAC). Costa Rica ranks particularly poorly in roads where it is second to last, and ports where it scores worse than most of the countries in Central America. Only air transport seems to be relatively up to task.

3. Moreover, over the last decade, the improvement of CRI’s competitiveness score and GCI rankings has not relied enough on infrastructure enhancements (Figure 1). For example, technological readiness, higher education, and training constitute the main drivers of Costa Rica’s improvement in the competitiveness score. In contrast, the institutional environment, labor and goods market efficiency have continuously burdened Costa Rica’s score performance. Macroeconomic environment was a drag during the slowdown of 2012-13 due to weakening of domestic demand and sluggish exports, and it has somewhat recovered since as the economy converges to its potential growth. Finally, improvement in infrastructure was strong at the beginning of the period, but it clearly stagnated thereafter. The latter is particularly worrisome as infrastructure investment has a complex and dynamic relationship with development outcomes such as job creation, market access, health and education (Ruiz-Nuñez and Wei, 2015).

5. The overall low quality of Costa Rica’s transportation infrastructure is likely the result of chronic underspending and deficient planning (OECD, 2016). Costa Rica shows lower-than-expected infrastructure quality compared with the country’s level of economic development, such as the level of income per capita. Costa Rica tends to underperform relative to its peers particularly in the case of roads, railroads and ports (Figure 3).

6. Infrastructure plays an important role in the supply chain service as facilitates connectivity and access to markets internally and externally (WB, 2016). Costa Rica’s inadequate infrastructure weighs on its logistics performance, ranging from delays to increased transportations costs due to inadequate conditions of roads and ports. While Costa Rica has made important progress in the relevant regulatory framework, such as the transparency of procedures (Cunha and Jaramillo, 2013), its logistics environment is suffering from the absence of modernization strategy that combines regulatory reform with investment planning and inter-agency coordination.

7. Logistics indicators suggest that Costa Rica has been losing ground in recent years. After an improvement in 2010, Costa Rica’s LPI score has been trending down during the last few years, according to an international survey, customs and infrastructure being the dimensions more problematic compared with other regions (Figure 4). Although Costa Rica is equal or more competitive than LAC and upper-middle income (UMI) economies in other dimensions, it still stands far behind OECD’s standards in general. High fees but low quality of infrastructure and services in ports and airports, solicitation of informal payments, major delays in customs and other official (e.g., sanitary inspection) clearance procedures and complex regulations related to logistics are the main obstacles perceived by local logistics agents.

8. High logistics costs are weighing on the competitiveness of Costa Rica and the region. Besides the inadequate infrastructure, the high costs in the logistic chain originating from transport services, customs efficiency, harmonization and standardization of procedures are affecting the competitiveness for both high and low value goods in Costa Rica and more generally in the region. Logistical bottlenecks include the limited road connectivity as well as border and port management facilities with insufficient physical capacity and contribute to markedly higher costs and delays for producers and exporters (World Bank 2012).

C. Stepping Up the Game to Compete

9. Costa Rica will need to address economic infrastructure bottlenecks to boost its competitive edge. Specifically, the low quality of transport infrastructure together with the broader logistical challenges mentioned in the previous section make it difficult for Costa Rica to ensure a more efficient integration into international supply chains. This section covers two possible action areas, namely improving investment efficiency on the one hand and the broader institutional framework on the other. First, putting strong systems in place to manage public investment is key for efficient allocation of public funds (Cerra et. Al 2016). Second, Costa Rica’s accession process to the OECD provides an opportunity to introduce best practices in terms of institutional arrangements that foster growth and inclusiveness through higher private investment.

10. According to Fund estimates, Costa Rica has substantial scope for improving public investment efficiency. We use the Public Investment Efficiency indicator (PIE-X) proposed by the IMF (2015), which estimates the relationship between the ratio of the public capital stock per capita and indicators of access to (and the quality of) infrastructure (it is thus a so-called hybrid indicator) (Figure 5).2 Countries with the highest infrastructure coverage/quality for a given level of public capital stock per capita determine the efficiency frontier. The slope of the latter is decreasing, illustrating the decreasing marginal returns to additional investment. The efficiency of public investment generally increases with income per capita, but efficient countries do exist across all income levels. The hybrid indicator for Costa Rica is 49 index points, compared with above 70 points for the top performers in the LAC region. While LAC compares well with Emerging Economies, with an efficiency gap of around 26 percent, Costa Rica lags not far behind with a 30 percent efficiency gap. However, this still leaves much room for amelioration.

12. Costa Rica ranks favorably in many business indicators and remains a regional leader in attracting FDI, but much can be done to strengthen its economic institutional set-up. As noted, Costa Rica needs to address infrastructure bottlenecks to maintain the country’s competitive advantage. The transportation infrastructure, the quality of which clearly is lagging with respect to other emerging economies, deserves special attention. As Costa Rica pursues accession to the OECD, it needs to take advantage of the technical reviews to tackle the complex institutional setting that weighs down on infrastructure investment.5 In this respect, an important home-made model is the success of the opening-up of the telecom sector in terms of greater access and lower costs.

13. Reforms of the institutional and legal framework of public-work agencies would improve policy design and execution in transport and other infrastructure sectors. In particular, the OECD (2016) makes the following important points:

14. In sum, Costa Rica must address infrastructure shortcomings through a multi-pronged strategy. Efforts should be channeled on three fronts: (i) increasing infrastructure investment, particularly, in transportation; (ii) improving the project management framework (especially for PPP); and (iii) enhancing the institutional and legal structures to match better long-term transport infrastructure decisions with economic and social objectives. At the same time, equally important is the need to create the fiscal space so that more public investment is possible without jeopardizing macroeconomic stability.

For a detailed description of the methodology see IMF (2005), and its application for Latin America, Cerra et. al. (2016).

Based on a sample of 25 countries, and using the PIMA tool, IMF (2015) found that the overall strength of PIM is strongly correlated with income, with PIM institutions being, on average, weakest in LIDCs and strongest in AEs. Also, average institutional strength tends to increase along the investment cycle, with planning being the weakest and implementing the strongest.

Since the General Concession Law was enacted in 1998, only 4 projects involving PPP have materialized. Three are already in operation: the toll road Ruta 27 San José-Caldera, the port Terminal Granelera en Puerto Caldera, and the International Airport Daniel Oduber Quirós. The fourth is the port Terminal de Contenedores de Moín (under construction), Chacon (2016). 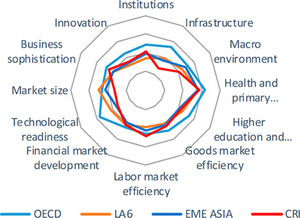 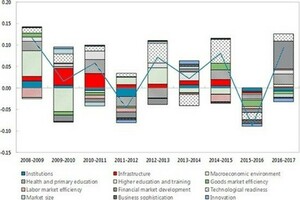 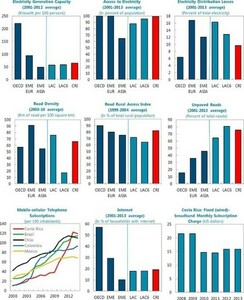 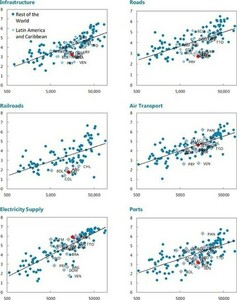 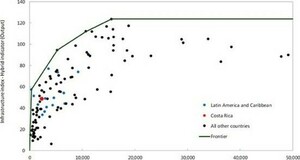 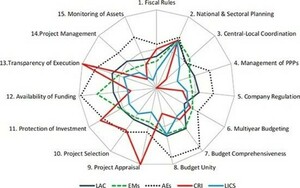