On June 2, 2017, the Executive Board of the International Monetary Fund (IMF) concluded the 2017 discussion on the common policies of the Eastern Caribbean Currency Union (ECCU) in the context of the Article IV consultations with member countries.1

Directors underscored the need to place public debt on a path consistent with the 2030 regional benchmark of 60 percent of GDP, while a few Directors called for a ceiling at this level. The adoption of credible fiscal frameworks, strengthened by fiscal responsibility legislation where appropriate, would help achieve the debt target. Directors stressed that sound management of the public sector wage bill is critical for fiscal consolidation. The decision by the Monetary Council of the central bank to discuss members’ medium-term frameworks and interim fiscal targets is a useful step, but determined implementation will be key.

Directors emphasized the need to prepare for natural disasters and build resilience, including through investment in infrastructure and ex-ante financing arrangements which are fully integrated in macroeconomic frameworks. Revenues from Citizenship-by-Investment (CBI) programs, which should be used to reduce public debt where necessary, can also be directed to saving funds and to finance appropriate investment plans. Directors suggested that a regional approach to CBI programs would help strengthen the integrity of these programs while reducing their costs.

While recognizing steps taken by the ECCB, Directors noted that weaknesses remain in the financial sector, with banks still burdened by high nonperforming loans. They highlighted the importance of enforcing prudential requirements based on a realistic assessments of banks’ capital needs. Prompt activation of the Eastern Caribbean Asset Management Company would accelerate banks’ disposal of their bad assets. Directors also encouraged early completion of key legislation, including a harmonized law on asset quality, a stronger regulatory framework for credit unions and insurance companies, and new insolvency legislation.

Directors suggested that the cost of securing correspondent banking relationships can be reduced through stronger AML/CFT legislation and supervision, bank consolidation, and improved communication. They also noted that removing the saving rate floor would improve the functioning of credit markets. Efficiency enhancements in the Regional Government Securities Market would help lower borrowing costs and improve financial intermediation.

Directors welcomed recent improvements in the quality of statistics and data provision, and encouraged further progress to enhance the quality of surveillance and policy analysis.

Under Article IV of the IMF’s Articles of Agreement, the IMF holds bilateral discussions with members, usually every year. In the context of these bilateral Article IV consultation discussion, staff hold separate annual discussions with the regional institutions responsible for common policies in four currency unions – the Euro Area, the Eastern Caribbean Currency Union, the Central African Economic and Monetary Union, and the West African Economic and Monetary Union. For each of the currency unions, staff teams visit the regional institutions responsible for common policies in the currency union, collects economic and financial information, and discusses with officials the currency union’s economic developments and policies. On return to headquarters, the staff prepares a report, which forms the basis of discussion by the Executive Board. Both staff’s discussions with the regional institutions and the Board discussion of the annual staff report will be considered an integral part of the Article IV consultation with each member. 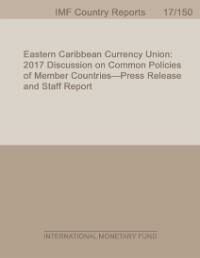