1. The monetary policy tightening cycle has come to an end. To contain inflation pressures and ensure that expectations remain anchored, the authorities have raised monetary policy rates by 325 bps to 7.75 percent since September 2015. However, in December 2016 the Monetary Policy Committee (MPC) surprised the market with a 25 bps rate cut. For the MPC, the main reasons behind this decision were that (1) the impact of transitory shocks that pushed inflation away from the target band continued to dissipate rapidly; (2) real GDP growth during 2016Q3 was lower than expected; and (3) ex-ante real interest rates were above their average since 2005. Regarding the latter, it is crucial to determine how the policy rate compares to the neutral rate in order to calibrate the stance of monetary policy.

3. The paper is organized as follows. Section B presents the estimates of the neutral interest rate. Section C presents the FCI. Section G draws conclusions from the above.

Estimates of the Neutral Interest Rate for Colombia

Estimates of the Neutral Interest Rate for Colombia

5. A reduced-form small open-economy DSGE model is also used to estimate the neutral interest rate. The model consists of a standard IS curve summarizing economic activity, a Phillips curve summarizing the determination of inflation, and a Taylor rule capturing the monetary policy reaction function—the first two can be obtained as a log-linear approximation of first order conditions of consumers’ and firms’ optimization problems in a monopolistic competition setting with price rigidities. The IS equation incorporates the real exchange rate to reflect the impact of open of economy variables on output. The Phillips curve includes a forward-looking component, and a lagged inflation term that captures the inertia of the inflationary process. The monetary policy rule captures the conventional logic where the central bank reacts to inflation and output gaps. In this model the neutral interest rate is the real rate that would prevail if inflation and output gaps were closed. The model is estimated using Bayesian methods, incorporating additional information about the parameters through the use of priors. In particular, the posteriors obtained in previous studies for Colombia—Gonzalez and Hamann (2011) and Hamann et al (2014)—were used as priors.

where x is the output growth gap (the deviation of observed annual real GDP growth with respect to its trend), π is the (core) inflation rate (in deviation with respect to the inflation target), r is the real (ex-post) policy rate, r* is the neutral real interest rate, and e is the rate of depreciation of the real exchange rate.

The depreciation of the real exchange rate is modeled as an AR(1) process:

6. The neutral interest rate for Colombia is found to have declined since 2007 (Figure 1). This finding is robust to various changes in the model specification. The results suggest that currently the real neutral rate is about 0.7 percent. However, the level of the estimated neutral rate depends on the specification of the model and shock assumptions. The (ex-ante) real policy rate is currently about 3 percent. Thus, based on the estimated DSGE model, the monetary policy stance is tight. Finally, the model is used for forecasting analysis and suggests that the pace at which the central bank should lower the policy rate depends on, inter alia, the impact of the VAT increase (Table 2). The model projects a consolidation of the recent downward inflation trend after a one time increase due to the VAT, and an easing to a terminal rate of about 5.6 to 6 percent in 2017.

8. In the 2016 Article IV Consultation an FCI for Colombia was constructed using a vector autoregressive (VAR) approach. The FCI captured in one indicator the information in stock market prices, sovereign spreads, the REER, the policy rate, lending rates, and the VIX. In this approach the weights of each financial indicator were assigned according to the estimated impact on real GDP growth in a VAR model. The results suggested that financial conditions eased continuously from the third quarter of 2014 until the third quarter of 2015, and then began reacting mildly to the policy rate hikes by the end of 2015. However, the loose financial conditions reflected largely the depreciation of the currency (Figure 2), which was performing an important role in the current adjustment process in Colombia. Thus, next we construct a new FCI using a methodology that estimates financial conditions adjusting for the business cycle and monetary policy.

9. A factor-augmented vector-autoregression (FAVAR) is used to estimate the FCI. Following Koop and Korobilis (2014) the model features time-varying parameter FAVARs (TVP-FAVARs) which allow coefficients and loadings to change in each period. Morevoer, two other useful special cases in which the VAR parameters are not time-varying are estimated: (1) the principal components-based factor-augmented VAR (PCA-FAVAR) proposed by Stock and Watson (2002) and Bernanke, Boivin, and Eliasz (2005); and (2) the Kalman-filter-based factor-augmented VAR (KF-FAVAR) by Doz, Giannone, and Reichlin (2011). The empirical model is given by

in which X is a vector of 20 financial variables, Y is a vector of macroeconomic variables (inflation, real GDP growth, the real effective exchange rate, and the monetary policy rate), f is an unobservable factor, and ε and u are uncorrelated (but heteroskedastic) error terms. In this setting, the factor f is the financial conditions index (FCI) and the coefficients λy and λf are the factor loadings which track the effect of both macroeconomic and financial conditions on each financial variable.

10. Financial conditions have deteriorated and remained tight during 2016 (Figure 3). The FCI is normalized around 0 over the observation period (2001–16) and values above zero indicate “loose” and below zero “tight” conditions. The constructed FCI is purged of cyclical influence by controlling for GDP growth; and fluctuations in the FCI do not capture the direct effects of monetary policy decisions as its derivation controls for the policy rate. Variables included in the FCI cover three main dimensions: risk (several interest rate spreads and asset price volatilities), collateral values and leverage (measures of bank leverage, housing and stock prices), and credit (commercial, consumption, and mortgage).

12. The monetary policy tightening has brought the policy rate above the neutral rate. To contain inflation pressures and ensure that expectations remain anchored, the authorities raised the monetary policy rate by 325 bps to 7.75 percent between September 2015 and August 2016. With the recent cuts and inflation expectations at 4 percent, the current (ex-ante) real policy rate is around 3 percent, above our assessment of a neutral range of 1–2 percent. Moreover, on top of the monetary policy tightening, overall financial conditions have remained tight in 2016 which will continue dragging growth this year. Hence, with inflation on a decreasing path and expectations falling inside the target band, the central bank has room to continue with the easing cycle—though the precise timing of cuts should depend on a consolidation of these trends.

As noted by Magud and Tsounta (2012), and by the wide range above, it is difficult to have a precise estimate of the neutral rate. Moreover, these methodologies ignore financial stability measures which could affect the level of the natural rate, as suggested in Borio et al (2016). 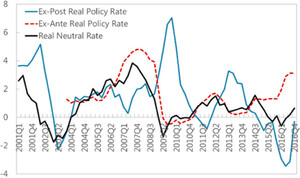 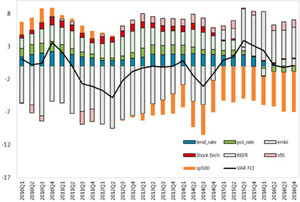 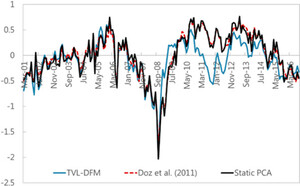 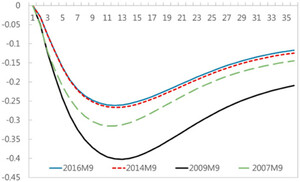