In the last ten years, Slovenia’s external balance has experienced a dramatic increase, with the current account rising from a deficit of −4 percent of GDP in 2007 to a surplus of almost 7 percent of GDP in 2016. Such a large surplus is unusual for an advanced economy with a relatively older population. A decomposition of Slovenia’s external position shows that most of the increase was due to an increase in goods exports. Thus, to understand the reasons for Slovenia’s external surplus it is important to understand the drivers of goods exports. This chapter compares Slovenia’s export performance to other countries in the region, examines the pattern of exports by product and partner, and assess the impact of factors such as partner growth and factor intensities.

A. Developments since the Global Financial Crisis

1. Slovenia’s current account balance has improved dramatically since the onset of the global financial crisis. This improvement was mainly driven by goods exports rather than a reduction in goods imports or an improvement in the services balance (Figure 1). Since 2007, Slovenia’s current account balance improved by 11 percentage points of GDP, from −4.1 percent of GDP in 2007 to +6.8 percent of GDP in 2016. Most of the improvement in the current account was driven by good exports. These increased from 55½ percent of GDP in 2007 to 62¾ percent of GDP in 2016, about two-thirds of the total improvement. The increase was driven by strong export growth rather than a decline in output. In particular, the real growth of goods exports averaged 2½ percent per year from 2007 to 2016, while Slovenia’s annual real GDP growth averaged only 0.1 percent. Imports declined marginally between 2007 and 2016 from 59½ to 58¾ percent of GDP. Within this overall aggregate, real imports of consumer and investment goods declined by 11 percent from 2007 to 2009 and remained subdued thereafter as businesses and consumers reduced consumption and investment due to lower income, reduced confidence, and uncertainty about the future. While services, in particular tourism, also boosted Slovenia’s economy, they were a smaller contributor, with the services balance increasing from 2¾ to 5¾ percent of GDP.

2. The performance of Slovenia’s exports after the crisis was also strong relative to that of other countries (Figure 2). In Europe, different countries saw different patterns of GDP growth. In Slovenia, strong exports offset a decline in domestic demand and overall GDP growth was relatively flat. A few countries (e.g., Croatia and Hungary) followed a similar pattern. But in others (e.g., Austria and Poland) domestic demand was the main contributor to growth. The Slovak Republic is the only country in the sample in which both exports and domestic demand played a significant role.

B. Structure of Goods Exports

3. Slovenia’s export structure has remained relatively stable over time, despite significant changes in the international trading environment (Figure 3). These include Slovenia’s 2004 accession to the EU, 2007 entry into the Euro Area, the 2007 global financial crisis, and a 2012–13 banking crisis.

4. The largest changes in Slovenia’s exports were concentrated in a small number of product categories and trading partners (Figure 6).

6. A decomposition of growth shows that most of the increase occurred in exports to existing markets rather than exports to new markets or introduction of new products (Figure 8).

C. Effects of Structure on Performance

7. Despite the good overall performance from 2007 to 2015, Slovenia’s export structure was actually a drag on growth of exports.

8. The product composition of exports can be used to estimate Slovenia’s comparative advantage by industry and type of labor input.

9. Another method originated by Peneder (1999) and used by Banerjee et al (2016) reveals competitiveness according to skill levels and factor intensities embodied in exports (Figure 11).

E. Explanations for the Positive Contribution of Exports and Prospects for the Future

11. Another factor that contributed to the large increase in exports as a share of GDP was that Slovenia’s trading partners experienced strong import growth during this period.

13. The improvement in Slovenia’s goods exports in the wake of the GFC was not due a particularly favorable orientation with respect to products or trading partners, but due to strong growth of partner imports and increasing market share. Slovenia’s current account improved dramatically from 2007 to 2016. This improvement was mainly due to higher exports of goods and, to a lesser extent, services like tourism. The strong growth of exports is striking from a cross-country perspective as Slovenia’s exports performed better than most other countries in the region. Surprisingly, given the good performance, Slovenia’s export structure was actually a drag on export growth from 2007 to 2016. Exports were concentrated in product categories and trading partners that grew more slowly than average during the period. Measures of Slovenia’s revealed comparative advantage suggest competitiveness in medium-skilled white-collar products. Moreover, exports of products that use high-skilled labor (pharmaceuticals and specialized industrial equipment) rose quickly, although they plateaued after 2009. Given that Slovenia’s export orientation was not particularly favorable in 2007, the increase in exports’ share in the economy was due primarily to strong growth of partner imports and an increase in the market shares of many of Slovenia’s exports in the European Union, stemming from improved competitiveness and deeper integration in regional supply chains. Prospects for future growth of exports should be good as the market orientation of exports appears better in 2016 than in 2007. Moreover, the IMF projects that the imports of Slovenia’s trading partners will grow even faster from 2016 to 2022. As a result, goods exports are expected to continue supporting economic activity in Slovenia.

Top 10 Gross Export Categories before and after the Crisis

Largest Changes in Good Exports by Product and Trading Partner, 2007 to 2015

Evolution of Exports by Embodied Skill Level and Factor Intensities 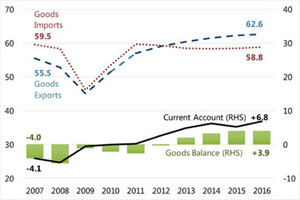 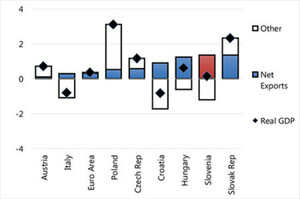 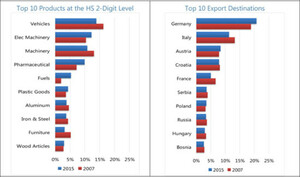 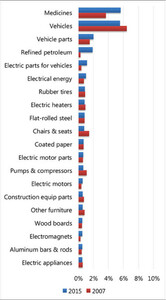 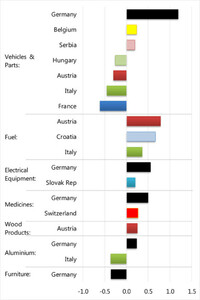 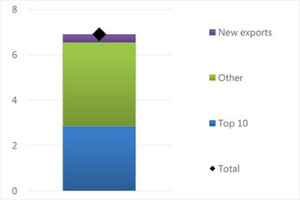 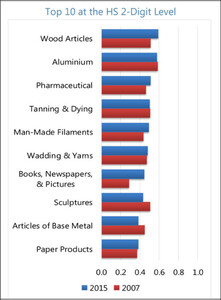 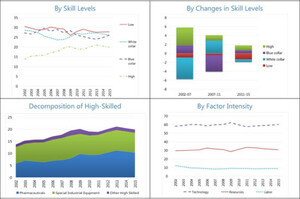 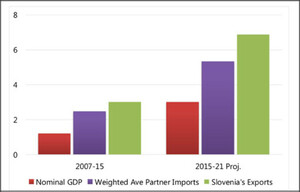 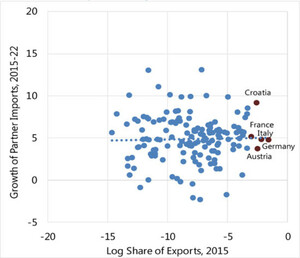 (in Percent, by HS 2-Digit Category)