This chapter focuses on the relationship between foreign exchange (FX) liquidity and corporate sector performance.2 Using panel data from 2013 Q3 to 2016 Q2, results from a simple empirical model show that recent declines in corporate earnings were associated with declines in FX earnings, whether from oil exports or autonomous sources.3 Results vary by sector, with the services sector particularly impacted by FX inflows linked to autonomous sources. This evidence highlights the importance of policy actions impacting FX inflows and in turn affecting non-oil economic activities more generally.

1. The performance of the corporate sector declined in the past few years. Financial statements (Orbis reports) for 150 companies covering a wide range of industries and sizes indicate:

2. The quarterly data show a similar declining pattern, but with possibly different dynamics across sectors. Firms tend to have the highest income in the last quarter, but this was not the case in the last quarter of 2015 (Figure 1, panel e). Moreover, the seasonal pattern and lag lengths are not necessarily the same across sectors (Figure 1, panel f). The EBIT of the wholesale and retail sectors never seem to have recovered to the 2014Q3 level, while the machinery and equipment and chemical sectors recovered to the 2014Q3 level before falling sharply in 2016Q1.

3. FX inflows fell sharply, mirroring the decline in corporate performance. By end-2016, FX inflows were only a third of the level observed in 2013. Starting in mid-2014, the slump in oil prices sharply curtailed FX availability in the economy: FX inflows to the Central Bank of Nigeria (mostly oil tax revenue) declined from $12 billion in 2013Q3 to $4.5 billion in 2016Q2, while other FX inflows to the economy—which include non-oil exports, capital inflows, and over-the-counter (OTC) purchases by oil companies—declined from $27 billion in 2013Q3 to $9.5 billion in 2016Q2 (Figure 2). During this period, three major devaluations occurred, with the exchange rate in the parallel market segment depreciating following the introduction of FX restrictions, including on CBN sales to Bureau de Change operators in January 2016 (Table 1 and Figure 2).

4. Given high import dependence for intermediate inputs and finished products, the link between FX availability and corporate performance was assessed using the following autoregressive model:

where EBITijt is the EBIT of firm i in sector j at time t; FXt is the FX inflows to the economy at time t. FX inflows include federation oil revenue to the CBN plus other autonomous inflows. The empirical analysis was conducted for the whole economy as well as for individual sectors. Firm-specific characteristics are modeled using ln EBITijt in mean-from-deviation form (instead of firm-specific dummies) to minimize the number of regressors, while quarterly macroeconomic fluctuations affecting firms’ EBIT are controlled for using quarterly dummies.

Transforming the ADL model specification into an error correction model (ECM), equation (1) is expressed first as:

and reparameterized in ECM format as:

5. FX inflows to the economy are highly correlated with corporate sector performance, mostly through macroeconomic fluctuations. Specifically, column (4) in Table 2 shows that in the short run, a 1 percent decline in FX inflows through autonomous sources have reduced firms’ operating profits by about 1 percent on average across sectors.4 This implies, that after accounting for macroeconomic factors, autonomous sources—remittances and non-oil inflows—are directly linked to corporate sector performance.

Analysis of the sectoral data shows that some sectors were more impacted than others (Table 3):

6. The recent decline in FX inflows seems to have adversely affected corporate performance, mostly through macroeconomic fluctuations, but with additional adverse effects through a decline in non-oil FX inflows. After controlling for macroeconomic fluctuations, the decline in FX inflows to the CBN, which mostly captures the oil revenue to the federation account at the central bank, was associated with the recent decline in operating profits of firms in the chemicals, rubber, plastics, and non-metallic products sectors. The decline in FX inflows to the economy through autonomous sources, which capture non-oil export receipts, remittances, and capital inflows, however, seems to have had a more pervasive and adverse impact on operating profits, particularly in the other services sector.

The regression results in table 2 for equations 1 to 3 either suffer from an omitted variable bias or multicollinearity. 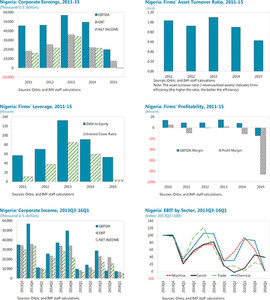