This Selected Issues Paper contains five chapters that examine the role of lower oil prices in explaining the deterioration in Nigeria’s recent macroeconomic indicators; the impact on corporate and financial sector performance; and the forward-looking aspects of promoting job-intensive growth and strengthening State and Local Government finances. While the slump in oil prices contributed to sluggish growth, the lack of foreign exchange weakened corporate performance, increasing the likelihood of non-performing loans. Structural reforms to improve the business environment can have a positive impact on growth, while fiscal reforms would help strengthen finances of sub-national governments.

Explaining The Impact of the Oil Price Decline on Nigeria1

This chapter examines the degree to which economic fundamentals at the time of the recent oil price decline explain the intensity of its impact on the Nigerian economy. A cross-country regression finds that countries with a stronger fiscal position, higher international reserves, a more diversified export base, a history of price stability, and a flexible exchange rate regime weathered the shock better. These factors explain about half of the outsized impact of the shock on Nigeria. In addition, the slowdown in Nigeria was larger than can be explained by fundamentals alone, suggesting that country-specific factors also played a role.

1. The Nigerian economy was hit hard by the decline in oil prices that began in 2014. Before the shock, projections were for continued robust economic growth of about 7 percent per year, in line with the average growth rate experienced over the previous two decades. However, in the wake of the oil shock, growth slowed sharply in 2015 and the economy experienced an outright contraction in 2016. The unexpected decline in oil production in 2016 explains only part of this downward surprise. Non-oil sectors, which account for almost 90 percent of the total economy, also slowed sharply (Figure 1).

2. The impact on Nigeria was relatively large compared to other oil exporters. To place the impact of the shock in a cross-country perspective, while keeping the focus on countries where oil prices likely played a meaningful role, real GDP growth was compared to pre-shock forecasts for 26 countries with substantial oil exports.2 The impact of the shock was calculated as real GDP in 2016 minus the projection from the Fall 2014 World Economic Outlook (WEO), the last vintage of the WEO before prices fell sharply.3 Economic activity in most oil exporters was typically below Fall 2014 forecasts, with the shortfall in Nigeria the third largest of the 26 countries (Figure 2).4 The impact on Nigeria was also relatively strong when measured as the slowdown in real GDP rates in 2015–16 compared to the 2011–14 period of high prices (Figure 3).

3. The impact appears to exceed what could be explained based solely on the basis of the importance of oil in the economy. Nigeria experienced a substantial decline in oil exports in the wake of the shock, as did most oil exporters (Figure 4).5 While a number of other countries have oil exports exceeding Nigeria’s 2013 level of 17.6 percent of GDP, Nigeria is heavily dependent on oil for export receipts and fiscal revenue.6 However, there is no correlation across countries between the importance of oil in either exports or fiscal revenue and the impact of the shock on real GDP, and the impact on Nigeria was larger than could have been foreseen based on any of these metrics (Figure 5).

5. Several variables were found to be significantly related to the severity of the impact of the shock. The five variables significant in the preferred specification were exchange rate regime flexibility, the ratio of non-oil exports to GDP, reserve adequacy, historical inflation volatility (over the seven years prior to the shock), and the ratio of net government debt to fiscal revenue (Table 1).10 Together, these variables explain sixty percent of the cross-country variation in real GDP in response to the oil shock. The same variables were still significant when the sample was expanded to oil exporters that experienced fluctuations in oil production due to severe armed conflict and other factors, as well as to a range of less oil-dependent countries, though, as expected, they explain a lower fraction of growth developments in those groups of countries (Table 1, columns 2 and 3).11 These same variables were also generally significant when the impact of the shock was measured by the average deceleration in real GDP growth in 2015–16 compared to 2011–14, both for overall real GDP and for non-oil real GDP.12 Given the difficulty in summarizing the degree of available fiscal space in a single variable, a wide array of specifications was run using a number of variables. Net debt—whether expressed as a share of total revenue, non-oil revenue, or GDP—was strongly significant across all samples, and several others were significant for the core sample.13

Source: IMF staff calculations.Notes: Heteroskedasticity and autocorrelation robust standard errors in parentheses; ***, **, * next to a number indicate statistical significance at 1, 5 and 10 percent, respectively.

6. These results suggest that economic fundamentals entering the oil shock played an important role in mediating its impact. Economic activity was less affected in countries that entered the shock with a more flexible exchange rate regime, a more diversified export base, more adequate international reserves buffers, a history of price stability, and a stronger fiscal position. The other external and structural factors discussed above were not found to play an important role.

7. These findings can be applied to explain the relative intensity of the impact of the shock on Nigeria. For each factor in Table 1, its contribution to explaining the growth impact of the oil shock was calculated for Nigeria and two groups of comparator countries—other Sub-Saharan African oil exporters and economies that operated managed float foreign exchange regimes in 2013.14 This latter group of countries has some key similarities to Nigeria in terms of their ratio of oil exports to GDP and the size of their economies.

8. Nigeria’s vulnerabilities entering the oil shock explain about half of the higher impact on economic activity. The cumulative impact on Nigeria’s real GDP was 15.5 percent, about 8 percentage points more negative than the sample average, of which about 4 points can be explained by its lower-than-average fundamentals (Figure 6). For other Sub-Saharan African oil exporters, the contribution of pre-shock fundamentals was only minus 2 percentage points. The main difference was Nigeria’s lower level of non-oil exports, as the contributions of below-average exchange rate regime flexibility, net-debt-to-revenue ratio, and reserve adequacy to the impact on Nigeria were similar to those among other Sub-Saharan African oil exporters. By contrast, the countries with managed float regimes entered the shock with higher-than-average non-oil exports and reserve coverage, and slightly lower fiscal deficits. Their relatively sound fundamentals diminished the impact of the shock on real GDP by about 4 percentage points.

9. In addition, the impact on Nigeria was more negative than would have been expected solely on the basis of its pre-shock fundamentals. The regression residual for Nigeria, shown in Figure 6, is negative 4.1 percentage points, while the average residuals of other Sub-Saharan African oil exporters and managed float economies were close to zero, on average. This suggests that policies in the wake of the shock, such as the delay in implementing the 2016 budget and the imposition of foreign exchange restrictions, as well as other idiosyncratic developments since the shock, such as the increased occurrence of oil infrastructure sabotage in Nigeria, have also contributed negatively.

10. These results underscore several policy priorities for Nigeria. Fiscal consolidation and building a more substantial reserve cushion would help build buffers to allow the economy to weather the sizable fluctuations typical of oil prices. Building a track record of price stability would create space for countercyclical monetary policy, and allowing the exchange rate to flexibly adjust to external conditions would reduce the transmission of oil shocks to the non-oil sector. Finally, structural reforms to improve the business environment would help diversify the economy and boost non-oil exports (see Chapter 4).

By Andrew Swiston, based on a forthcoming IMF Working Paper with Francesco Grigoli and Alexander Herman, with research assistance from Adrian Robles.

This includes countries in which oil exports in 2013 exceeded 8 percent of GDP, but excludes South Sudan and Yemen due to the armed conflict in these countries over this period, Iran and Iraq as their GDP growth performance was strongly affected by increases in oil production not projected as of 2014, and Libya and Syria due to data gaps. Real GDP was used as the variable of interest as there are a number of transmission channels from oil prices to economic activity in oil exporters, and real GDP forecasts are widely available.

A negative value indicates a higher impact of the shock, that is, that growth was lower than projected. Oil prices hit a trough in annual average terms in 2016. In addition, the shock would be expected to affect the rest of the economy with a lag. For that reason, the focus is on the cumulative impact through 2016, though the results hold when the impact through 2015 is considered.

While other factors affected growth in these countries over this period, the oil price was the most significant external factor to change between 2014 and 2016. The fact that growth underperformed forecasts in most countries—in many cases by a wide margin—suggests this shock played a substantial role.

A portion of the decline in Nigeria’s oil exports is explained by lower oil production due to an increase in sabotage of oil infrastructure.

In 2013, oil accounted for over 95 percent of exports and three-quarters of government revenue, though oil GDP was less than 13 percent of overall GDP.

The nature of the identification strategy precluded a panel approach, as there were no other large oil price declines in the last two decades featuring such a sizable permanent component, as gauged by movements in oil futures contract prices.

Exchange rate regime flexibility is measured using the assessment of the de facto regime in the IMF’s Annual Report on Exchange Arrangements and Exchange Restrictions (AREAER). The specification shown in Table 1 assigns a value of positive one to floating regimes, negative one to stabilized arrangements, conventional pegs, currency boards, and officially-dollarized regimes, and zero to others. A variable using the scale of one to ten used in the AREAER yielded similar results.

The group of all oil exporters includes those countries exporting more than 50 thousand barrels per day.

The impact on non-oil real GDP relative to pre-shock forecasts was not assessed, as several countries did not have forecasts available for the non-oil sector.

These were gross debt, the overall fiscal balance, the primary balance, and interest expenditure (whether as a ratio to GDP or revenue). No combinations of these variables were significant, with multicollinearity between them, as well as the limited degrees of freedom, likely playing a role.

Nigeria: Oil Dependence Does Not Explain the Shock Impact 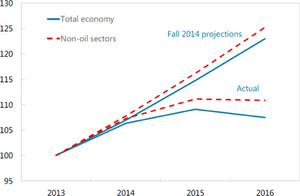 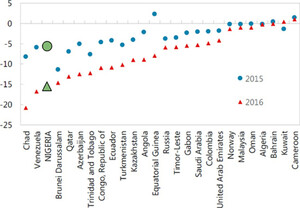 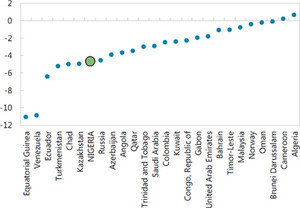 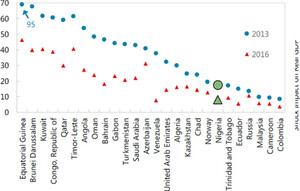 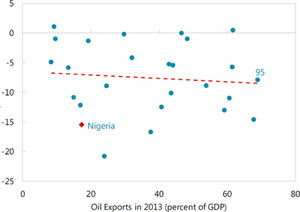 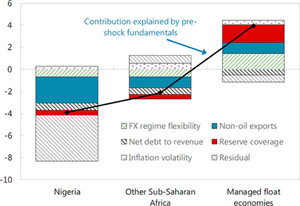 Source: IMF staff calculations.Notes: Heteroskedasticity and autocorrelation robust standard errors in parentheses; ***, **, * next to a number indicate statistical significance at 1, 5 and 10 percent, respectively.