This paper quantifies the effect of gender inequality in Morocco on growth, compared to groups of faster growing countries. It also estimates income losses due to low female labor force participation. The results highlight that closing overall gender gaps would help Morocco close its GDP per capita gap with benchmark countries in other regions by up to 1 percentage point. Simulations also show that gradually closing gender gaps in the labor force participation rate could lead to significant income gains over the long term. Policy recommendations to promote gender equality include investing in secondary education for women and in infrastructure, and reforming gender-discriminatory tax policies and laws.

1. A number of studies have highlighted the correlation between gender gaps and weaker growth (WEF 2014; Cuberes and Teignier 2015a; Elborgh-Woytek and others 2013; Gonzales and others 2015b; IMF 2015a). The relationship between gender gaps and growth can work through various channels. Having more women in the labor force increases the pool of talent that employers can hire as well as the number of potential entrepreneurs. This implies a more efficient allocation of resources, and hence higher productivity and growth (Cuberes and Teignier 2015a). Women are more likely to invest a larger share of their household income in the education of their children (Elborgh-Woytek and others 2013). Finally, gender inequality is related to income inequality, which in itself has been shown to be a drag on growth (Ostry and others 2014). An IMF study shows that the Middle East, North African, Afghanistan and Pakistan (MENAP) region could have gained $1 trillion in cumulative output—equivalent to twice the average real GDP growth during the past decade—if female labor force participation had narrowed the gender gap from triple to double the average for other emerging market and developing countries during the past decade (IMF, 2015b).

2. This paper assesses the impact of gender inequality on growth in Morocco. According to the United Nations gender inequality index, Morocco ranked 117th out of 155 countries—below other MENAP countries such as Tunisia (48), Algeria (85) and Jordan (102).2 This is a cause of concern for Morocco, since at the global level, countries with high gender inequality are poorer and grow more slowly (Figure 1). The paper will first provide an overview of trends in Morocco’s gender gaps over time and compared to peer countries. It will then estimate GDP losses due to gender gaps. Finally, it will discuss policies to reduce gender gaps in Morocco.

A. Gender Gaps in Morocco

3. Much progress has been made in closing gender gaps in education enrollment but challenges remain, in particular in rural areas. The female to male enrollment ratio at the primary school level jumped from around 70 percent in the mid-1990s to 95 percent today, and the gender gap for the secondary and tertiary levels narrowed significantly, up to 85 percent and 90 percent respectively. Nonetheless, Morocco is being outperformed by other comparator regions (Figure 2). Similarly, gaps in the adult literacy rate have also narrowed, but Morocco is also being outperformed by peer countries. Moreover, these improvements have been driven by the urban areas, where gender gaps in primary and secondary education enrollment have narrowed significantly. In contrast, in rural areas, 60 percent of women are illiterate compared to 35 percent for men.

4. Gender gaps in the Moroccan labor market are particularly large. At 25 percent, the rate of women’s participation in the labor force is just at the average for the MENAP oil importers’ region and lags behind other countries at a similar income level (Figure 3). In addition, female labor force participation has been declining over the past decade, mainly driven by falling participation for women over 25 years of age (World Bank 2016). There are also disparities between the rural and urban areas in terms of labor force participation, with the gender gap being wider in urban areas (HCP 2015). However, rural women seem to function as a “shock absorber” for the economy as they participate in the labor market in greater numbers when the economy goes well but are the first to be excluded when there is a downturn (Verme and others 2014).

5. There are also some gender disparities in employment rates, in particular for educated and young women. While the rate of unemployment is only slightly higher for women than for men and similar for youth, educated women have a much higher unemployment rate than their educated male counterparts (Figure 4). Labor market mismatches and regulations are known to be impediments to employment in Morocco and their impact is more acute on women. Indeed, Angel-Urdinola and others (2016) show that high minimum wages and payroll taxes are associated with higher unemployment rates and lower formality rates in Morocco, especially among youth and women in Morocco. Low levels of education also limit the chances of these women to actively participate in the economy and forces them to work in low quality jobs (Figure 5).

B. Quantifying the Impact of Gender Gaps on Growth

6. Two different empirical approaches are used in this paper to assess the impact of gender gaps on the Moroccan economy. First, we decompose the differences in average real GDP per capita growth rates in Morocco and benchmark groups that can be explained by gender gaps between Morocco and these groups. Second, we use a general equilibrium occupational choice model to quantify potential GDP losses due to misallocations of women in the labor force.

Implications of gender inequality for growth

7. A growth regression helps quantify the effect of gender inequality in Morocco, compared to groups of faster growing countries. We estimate the impact of gender inequality on growth while controlling for the impact of variables such as initial income, investment, education, infrastructure, terms of trade, and institutional quality on growth following the approach taken in Hakura and others (2016, Annex 1). The sample consists of 103 countries from regions including MENA, LAC, SSA, and Asia, as well as selected advanced economies over the period 1990 to 2014. We estimate the following equation:

in which yi is GDP per capita, Xi captures explanatory variables aforementioned and εt is the error term. A robust two step GMM methodology allows us to control for endogeneity issues.

10. An occupational choice model is used to quantify the current income losses due to misallocations of women in the labor force. In particular, we use the general equilibrium occupational choice model by Cuberes, Newiak and Teigner (2016) in which agents are endowed with a random entrepreneurship skill that determines their optimal occupation.4 Agents choose to work as either employers, self-employed, or employees. However, female labor market frictions prevent an optimal choice of women between these activities.5 In particular, only a fraction μ of women can choose their occupation freely, while a 1- μ cannot become an employer. Out of those excluded from being an employer, only a fraction μ0 can choose to be self-employed. Finally, only a fraction λ can join the labor market in general, while a share of 1-λ of women is excluded from all occupations. These frictions may reflect discrimination, differences in optimal choices of women, or other demand and supply factors (see Box 1). The parameters μ, μ0 and λ are chosen to match the ratios of female to male employers, female to male own-account workers and women to men in the labor force.

There are important regionally specific factors such as history, religion, and culture, as well as social norms that explain the low level of female labor force participation in the MENA region (World Bank 2012). In the case of Morocco, several papers (Verme and others 2014, World Bank 2015) have argued that the slow pace of growth—coupled with factors such as marriage, education, household composition, perceptions of the role of the women in the household, and society’s values regarding gender issues—tend to influence labor force participation. Verme and others (2014) highlight that the slow pace of structural transformation has not allowed sufficient creation of manufacturing jobs where women with a secondary school education could be employed. Marriage and household composition also influence the probability of participation. Educated women are likely to marry educated men who have done better than women in the labor market and may be able to support their families on their own. The probability of participation decreases with the number of children below six in urban areas.

11. The results show that Morocco is currently losing out on a significant share of income due to gender gaps in the labor market. The costs associated with gender gaps in labor force participation and entrepreneurship are currently as high as 46 percent of income per capita compared to a situation where women have the same level of labor force and entrepreneurship participation as men.

Simulating the implication of an increase in the dependency ratio for men and women suggests that policies to eliminate gender gaps could offset those negative effects. This in turn may lead to overall income gains of about 27 percent in 2040 if gender gaps are closed in 50 years (Figure 7).6

Fiscal policies can play an important role in promoting gender equality and women’s development. Gender budgeting allows fiscal authorities, at any level of government, to assess the needs of men and women; identify key outcomes or goals; plan, allocate, and distribute public funds; and monitor and evaluate achievements. More than 80 countries have introduced gender budgeting initiatives. While the focus for most countries tends to be on using spending policies to address gender inequality, some countries have introduced changes to tax policies. Gender budgeting may emphasize administrative changes to expenditure tracking and monitoring systems.

Morocco is notable for being a precursor in introducing gender budgeting initiative in the Middle East and Central Asia region. Beginning in 2002, Morocco’s early efforts in gender budgeting focused on meeting the Millennium Development Goals, increasing women’s public employment, and collecting gender-disaggregated data. One of the cornerstones of Morocco’s effort is its annual Gender Report, published by the Ministry of Economy and Finance. The report now covers more than 30 departments and ministries and highlights key gender equality goals and recent accomplishments; in addition, some ministries report sectoral- and gender-disaggregated data.

Morocco has also taken steps to enshrine gender budgeting in its legal framework. The Council of Government approved in 2014 an organic finance law with two key components designed to strengthen the initiative. First, the law requires that gender equality be considered when defining performance objectives, results, and indicators in all line budgets. Second, the law dictates that the Gender Report be included as part of each year’s Finance Bill (UN Women 2014a). The latest Government Plan for Equality calls for strengthening this law by increasing transparency, improving fiscal performance, and generalizing evaluation, audit, and accountability procedures (Ministry of Economy and Finance of Morocco 2013).

14. While these measures are welcome and should be continued, some could be expanded or complemented by additional policies, such as:

This index measures gender inequality of outcomes (the gap between male and female labor force participation rates and the share of women’s seats in parliament) as well as inequality of opportunity (gender gaps in education and indicators of female health, such as the maternal death ratio and adolescent fertility).

The model is based on the span-of-control framework in Lucas (1978), with the extension of self-employment as a possible occupational choice and uses ILO data on occupation by gender.

This omits the possibility of women producing some type of good in the household sector or in the informal economy.

In 2004, a new labor law went into effect in Morocco, offering greater protection for women in the labor market (such as restrictions on women’s working hours and types of jobs, mandatory leave and rest days, and time allowances for breast-feeding and childcare requirements).

Education and Literacy in Morocco

Education and Literacy in Morocco

Labor Force Participation and Employment Levels by Education and Gender

Employment Trends by Gender and Sector 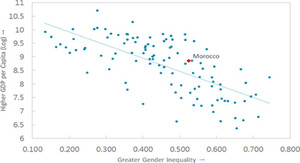 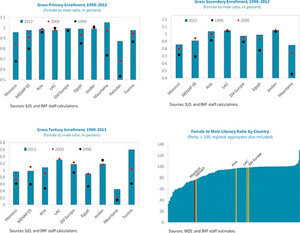 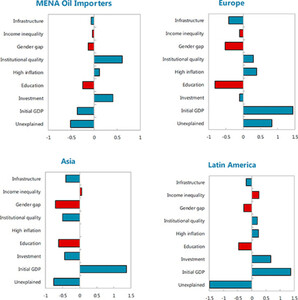