A Roadmap for Structural Fiscal Reforms in Iran1

1. Iran has sustained a relatively low overall fiscal deficit in challenging circumstances. Over the past 5 years, the overall fiscal deficit of the central government was kept below 2 percent of GDP despite the drop in oil revenues arising from the impact of the oil embargo and then the decline in world oil prices since-2014. This reflected the government’s policy that aimed to contain the deficit in line with available financing and its longer-term strategy to gradually reduce its dependency on oil revenue. For example, VAT was introduced in 2008, and the rate was gradually increased, to reach 9 percent in 2015/16. In parallel, tax administration was strengthened leading to increasing numbers of registered taxpayers and continued improvements in tax collection. In 2015/16 tax receipts exceeded oil revenues for the first time.

2. Nonetheless, the shock to oil revenues in recent years has exposed a number of underlying vulnerabilities in Iran’s fiscal system:

4. A MTFF would provide policy makers a comprehensive framework to assess how fiscal policy can balance the need to ensure the sustainable use of oil resources while addressing new spending pressures and supporting the economic recovery. Casting the budget in a MTFF and shifting away from an annual budgeting process would provide the government a more comprehensive tool to assess what the appropriate level of the fiscal deficit is taking into consideration macroeconomic conditions, the level of debt and its sustainability to shocks, and what would be a sustainable use of its oil proceeds. It can inform decisions about the fiscal space available for discretionary fiscal stimulus or in cases where adjustment is needed, the space available for a more gradual adjustment. The framework can also be used to help evaluate the cost, growth and distributional impacts of different policy measures.

5. Table 1 summarizes the medium-term fiscal framework prepared by staff for the 2016 Article IV Consultation. In conducting this analysis of fiscal space we found that Iran has some space to implement a gradual adjustment. This would have the advantage of providing time to implement thorough reforms, which, to be sustainable, will require time to secure broad support and ensure that there is adequate administrative capacity to implement them. In preparing the MTFF, we used the following steps to assess the space and pace of adjustment that would preserve sustainability while balancing the need to support the economic recovery and underpin the credibility of the macroeconomic policy framework:

Staff estimates of permanent measures to be taken every year.

Staff estimates of permanent measures to be taken every year.

C. Implementing a MTFF in Iran

6. Casting the government’s budget in a MTFF and shifting away from an annual budgeting process would require several supporting reforms. A MTFF typically contains a statement of fiscal policy objectives and a set of integrated medium-term macroeconomic and fiscal targets and projections. The approach is “top-down” where the PBO would set the overall fiscal space for government spending. Key elements that should be included in the MTFF are:

7. Greater fiscal transparency and oversight will also be critical to support the MTFF and fiscal consolidation.

8. Finally, the MTFF could be accompanied by a revised fiscal rule to guide the allocation of oil revenues. The Fifth 5-year National Development Plan had introduced a fiscal rule on the repartition of oil revenue between the National Iranian oil company (NIOC), 14.5 percent, the budget (65.5 percent), and the National Development Fund of Iran (NDFI, 20 percent increasing by 3 percentage points each year to reach a share of 38 percent). However, this rule did not provide the budget a buffer to address shocks, and, as a result, the rule was amended in each of the past three budgets. The annual budget laws for 2015/16–2017/18 approved an ad-hoc adjustment of the NDFI share to increase the share of the oil revenue allocated to the budget. A revised rule that carves out a specific allocation for a stabilization buffer could protect budgeted spending against oil or other revenue shocks. This could be done, for example, by reinstating the OSF and/or allowing the use of NDFI financial assets to support the budget or bank recapitalization needs. Determining the share that would be allocated to the OSF would require an analysis of the level of buffers needed to address typical shocks. Since the past experience of Iran’s fiscal rule has been mixed, the authorities could consider adding to the rule a formal escape clause, in line with best practices.

The OSF was replaced by the National Development Fund of Iran (NDFI), which on-lends oil proceeds to the private sector for investment and it is legally prohibited from financing the budget.

Fiscal Deficit Trend to Adjust to the PIH Norm 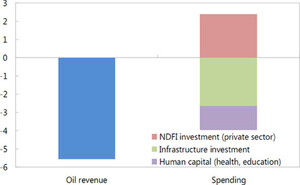 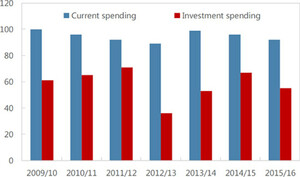 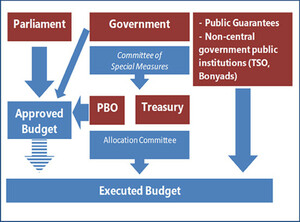 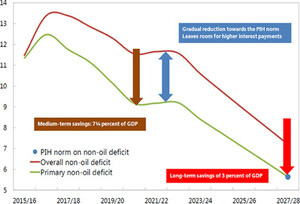 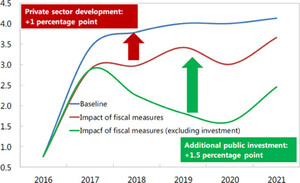