1. Currently, monetary policy in Iran is geared to achieve the objectives set in the Five-Year Plans and is guided by the Money and Credit Council (MCC) of the CBI. The MCC is dominated by representatives of other government agencies. The CBI, on the directives of the MCC, implements the government’s credit policies to support the plan by allocating credit limits to each sector, sometimes at subsidized rates. As a result, credit policies imposed by the government have a direct bearing on the pace of liquidity growth and hence inflation. In addition, interest rates, on both deposits and lending, are fixed and financial institutions are obliged to follow the CBI’s directions in their operations.

2. The CBI’s funding facilities are not collateral based, there is no clear emergency lending framework, and unhealthy banks remain in the system. In practice, the CBI is obliged to provide liquidity to all banks irrespective of their health. The absence of corrective measures to recapitalize the banks and wind down unviable ones reflect themselves as rising pressures on the CBI’s overdraft facility. The use of the CBI’s so called “overdraft facility” by banks (at the penalty rate of 34 percent) has gained considerable pace in 2016.

3. The CBI has some tools to manage liquidity but they have not been used in recent years. It can issue participation papers to mop-up liquidity. This requires MCC approval. It can also issue Special Certificates of Deposit to absorb excess liquidity.

4. Under the current monetary framework, the CBI has no regular funding facility and hence no specific policy rate. The CBI needs to provide funding to the market for the money market to clear. Accordingly, the policy rate has to be a lending rate. The only available lending rate to banks, other than the directed credit schemes, is the CBI overdraft facility rate of 34 percent. Accordingly, the current “interest rate corridor” is very wide. At the bottom of the corridor, there is the CBI’s borrowing rate with no interest, and at the top of the corridor, there is the CBI’s overdraft rate at 34 percent (Figure 1).

5. The monetary policy framework in Iran, has resulted in high and volatile inflation (Blotevogel, 2014). Contrary to many emerging market economies which have experienced notable and sustainable declines in inflation in the last decade, Iran has experienced periods of sustained high inflation, particularly during the sanctions era. The authorities have successfully reduced the inflation rate as a result of sound macroeconomic policies. But the annual inflation rate is barely in single digits and the recent monetary expansion endangers the hard-earned reduction of the inflation rate.

6. Changing the design of the monetary policy framework can give a greater priority to inflation stabilization. The exchange rate has long been a nominal anchor for Iran’s monetary policy. The authorities continue their efforts to remove foreign exchange restrictions and shift further goods to the bureau market, thus paving the way for a full foreign exchange market unification. Once unified, their intention is to move to a managed float. Greater exchange rate flexibility will require a modern, market-based monetary policy framework focused on maintaining price stability.

7. The authorities are moving to a market-based monetary policy framework. Short-term market interest rates increasingly contain information about the monetary policy stance as the operational conduct of the CBI is increasingly focusing on the interbank market. The CBI has started to inject liquidity to the financial system through the interbank market (Figure 2) and aims to keep interbank rates within a target range. Under the authorities’ Financial Sector Reform Plan (Box 1), draft Central Bank and Banking bills aim to modernize the monetary policy framework and strengthen supervisory powers.

8. The draft Central Bank bill aims to modernize the monetary policy framework and puts price stability as the core objective of monetary policy. It incorporates major improvements relative to the current law with regards to the clarity of the objective function, the supervisory authority and governance of the CBI. The draft Banking and the CBI bills grant the CBI the power to supervise all deposit-taking institutions. Financial stability is included among the core objectives of the CBI. Helping with economic growth and preservation of the value of foreign currency are other stated objectives but their undertaking is secondary to price stability objective. The bill obliges the government to repay all the funds it receives from the Central Bank by the end of the same fiscal year.

9. The development of the bond market would help the CBI collateralize its funding operations and provide it with the tools to implement open market operations. The authorities started issuing government debt instruments and making them marketable as they clear government arrears. Although limited in size, the amendment to the 2016/17 budget allows for some bond issuance to recapitalize banks. As securitization and recapitalization gains pace, in tandem with the implementation of the financial sector reform, the existence of the bond market would help the CBI to collateralize its funding facilities and engage in open market operations.

10. Despite these positive steps, several additional elements are needed to support the transition to a market-based monetary policy framework.

B. Using a Financial Conditions Index to Assess Economic Conditions

11. Analyzing information about financial conditions will be essential if the CBI is to better assess the state of the economy to inform monetary policy decisions. A well-designed financial conditions index (FCI) could serve as a guide to the effective stance of policy, after taking into account all the other factors that affect financial variables.

12. There are several challenges to building an FCI for Iran. The lack of timely data reduces the variables that could be included. In addition, absence of a clear policy rate or market rate that is effective in setting loan and deposit rates complicates the task. Absence of data on inflation expectations makes it difficult to determine inflation-adjusted real returns. There is no liquid government bond market or yield curve. Therefore, changes in the yield curve or the term spread cannot be used as an indicator in the FCI.

13. Therefore, our FCI for Iran includes:

14. We weight each variable by giving the variable with the highest volatility the lowest weight. Because of its volatility, the equity market has the lowest weight in our FCI. Liquidity growth has the highest weight, followed by the Real Effective Exchange Rate (REER) and the real lending rate. We standardized the series by subtracting the FCI’s mean and dividing by its standard deviation. Accordingly, an FCI value above zero implies a tightening and below zero implies a loosening in the financial conditions (Figure 4). As a gauge of activity, we have used the quarterly averages of FCI and employed it as an early indicator of non-oil GDP growth.

15. The model shows that loosening (tightening) in FCI is followed by an increase (decrease) in non-oil activity with one quarter lag (Figure 5). The tightening in the FCI (reversed in Figure 5), which started in 2013, has been partially reversed since early 2015. The tightening in the FCI was broad-based as almost all the variables moved in the same direction during that period. Despite remaining tight, the FCI changed course in 2015 and loosened during the first half of 2016. The increase in liquidity, driven by looser fiscal and monetary policies, and the rise in stock market following the Joint Comprehensive Plan of Action (JCPOA) agreement, both have been contributing to the easing in the FCI. The relative easing in the FCI was followed by a rise in non-oil activity starting from the third quarter of 2015. The current level of the FCI suggests that financial and monetary conditions remain tight despite some loosening in 2016 and it does not suggest a further increase in the pace of economic activity.

16. A better understanding of long-term determinants of inflation in Iran will be central to the monetary policy decisions of the CBI. Models of inflation that envision inflation as a cost-push phenomenon in the context of a long-term constant mark-up over costs, have been frequently employed in emerging market economies to investigate inflation drivers. To investigate the long-run properties of the mark-up model, we employ an Autoregressive Distributed Lag (ARDL) (Peseran and Shin, 1997) for the period spanning January 2012 through June 2016

18. Our results show that regulated prices, the exchange rate and global food prices are important determinants of inflation in the long-run, while inflation is negatively correlated with production. The model suggests that a 1 percent rise in the regulated prices, increases inflation by 0.65 percent in the long-run. The authorities often use administrative price adjustments to close the financing gap of state-owned enterprises, and recently to eliminate gasoline subsidies, which in turn has a sizable impact on the inflation rate through first and second round effects. As expected, exchange rate pass through is strong in Iran. An exchange rate depreciation of 1 percent increases inflation by 0.4 percent. The pass-through of a depreciation into domestic prices is possibly larger than the share of imported goods in the consumption basket would indicate. This is because an increase in the price of imports in the face of a depreciation would also affect inflation expectations. Iran is a major importer of foodstuffs and changes in global food prices is an important driver of inflation in Iran. An increase of 1 percent in global food prices would increase inflation by 0.34 percent. As expected, an increase in production leads to a decline in the inflation rate. An increase of 1 percent in industrial production would reduce inflation by 0.1 percent.

19. The findings shows the importance of setting prudent macroeconomic policies to avoid sizable fluctuations in the exchange rate and hence inflation. Fiscal and structural reforms are needed to prevent fiscal dominance and put state owned enterprise SOE finances on a sounder footing and reduce need for regulated price increases. Finally, our analysis also shows that the rise in production in Iran is helping lower inflation by addressing supply constraints. This suggests that structural reforms and infrastructural improvements to increase the country’s productive capacity can also play a role in the long-run in safeguarding low inflation. 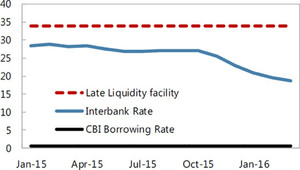 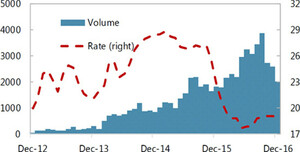 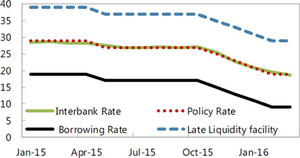 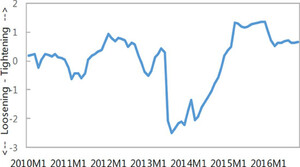