Gender gaps in womens’ economic opportunities—both labor market and entrepreneurship—have remained high in India. Lack of adequate collateral limits women entrepreneurs’ ability to access formal finance, leaving them to rely on informal sources, which is the key barrier to the growth of women-owned enterprises. The analysis in this chapter suggests that an increase in female entrepreneurs’ access to formal finance can increase employment, entrepreneurship, improve competitiveness, and boost potential growth. However, single-sector interventions have a limited impact since women face multiple and intertwined constraints. A multi-dimensional approach—using a range of fiscal, legal and structural measures—could be used to maximize long-run economic gains and to promote greater economic participation of women.

1. Despite rapid economic growth, gender disparities in women’s economic participation have remained deep and persistent. The 2016 World Economic Forum’s Gender Gap Index ranked India 136th out of 144 countries on economic participation and opportunity, indicating large gender gaps in labor force participation (LFP), wages, and senior managerial and technical positions. Moreover, female labor force participation (FLFP), which is at one-third of male labor force participation, has been falling over time. Informal sector employment constitutes more than 90 percent of total employment, and females are largely employed in low productivity informal jobs in the agriculture and services sector. In addition, they receive lower wages for equal work, have lower average years of schooling, and are responsible for a much larger share of household-related work in comparison to males (Figure 1).

2. Gender gaps in entrepreneurship and access to formal finance remain high. Women entrepreneurs comprise about 10 percent of the total number of entrepreneurs in India2, and they are largely skewed towards smaller sized firms (98 percent of women-owned businesses are micro-enterprises) with approximately 90 percent of them operating in the informal sector. Access to formal finance is the key barrier to growth of women-owned enterprises, leaving them to rely on informal sources of finance (over 90 percent).

3. Lack of adequate collateral remains a key constraint in women entrepreneur’s ability to access finance. On the demand side, limited awareness and social restrictions around inheritance and land ownership rights, as well as limited financial awareness, turn female entrepreneurs towards finance from informal sources. On the supply side, banks generally consider women-owned enterprises as a high-risk sub-segment, as these enterprises operate mostly in the informal sector and are usually micro in scale. Moreover, absence of collateral causes banks to avoid this sub-segment.

Empirical Evidence for Determinants and Economic Impact of Gender Gaps

4. What explains these gender disparities? Empirical evidence identifies various demand and supply side constraints specific to females’ economic participation that can be classified under three main categories. First, gender differences in time use, primarily resulting from differences in care responsibilities due to social norms (Eswaran et al, 2013). Second, gender differences in access to productive inputs—land, credit and skills (Gonzales et al, 2015). Lastly, gender differences stemming from market and institutional failures—lack of basic infrastructure and safety, lack of implementation of laws against gender-based discrimination amongst others (World Bank, 2011; Ghani, 2013).

5. What drives the formal-informal dichotomy in Indian labor and goods markets, and how is it linked to females’ economic participation? In addition to the above constraints faced by females, lack of employment opportunities in the formal (organized) sector is also an important contributor to the declining trend in FLFP (Khera, 2016a, 2016b; Das et al, 2015; Chatterjee et al, 2015). The large size of the informal sector has been attributed to tightly regulated formal sector which encourages firms to: a) remain small and informal to avoid regulations; and b) hire labor on an informal basis to avoid high costs of hiring and firing (see Besley and Burgess, 2004; Sharma, 2009).

6. Why should policymakers care? Economic growth and development depend upon successful utilization of the entire workforce, both male and female. The evidence that gender inequality is impeding economic growth is growing, and the potential gains from greater inclusion of women in the Indian economy are estimated to be large. According to Cuberes and Teignier (2016), closing the gender gap in India could boost GDP by 27 percent. Although, in terms of relative magnitudes, India’s gains should be and are indeed found to be larger than most countries, this may be an overestimate as their results are based on a model simulation that does not take into account the large informal sector in India resulting from high rigidities in the formal labor and goods market, which would dampen the gains from any gender-based reforms (see Khera, 2016b).

7. The effects of the following policies are analyzed in this chapter. What is the impact of an increase in female entrepreneurs’ access to formal finance (i.e. no gender gaps in financial access) on: i) gender gaps in business opportunities (entrepreneurship); ii) gender gaps in the labor market (female labor force participation, female informality in employment, and wage gaps); and on iii) macroeconomic outcomes (GDP, unemployment, and overall formality)? In addition, we also study the impact of the former under two scenarios: a) combined with lower regulations (i.e. higher flexibility) in the formal sector labor market; and b) combined with skill development policies (i.e. no gender gap in skills).

8. A small-open economy dynamic stochastic general equilibrium (DSGE) framework provides a comprehensive analysis and captures the macro-linkages between India’s labor market, financial market and overall economic performance. The theoretical framework is an extension of the framework presented in Khera (2016), to which we add financial micro-foundations (i.e. a banking sector) to analyze the problem of gender-specific financial frictions and their macroeconomic implications. The economy consists of: a) households with male and female members; b) male and female owned enterprises; c) capital producers who invest in new capital; c) banks that provide loans to firms; d) the government who taxes formal wage income to fund social spending and sets the interest rate; and e) the rest of the world. The model features two sectors—regulated formal sector and unregulated informal sector—where the key distinctions between the two are summarized in Table 1. To capture rigidities - firms in the formal sector face higher entry costs (to set up a new business), higher costs of hiring and firing workers, and workers employed formally have a higher wage bargaining power (i.e. unionized labor). In addition, the size of informal finance in the economy is positively related to: i) the degree of financial frictions in the formal sector; and ii) the overall share and size of informal firms (which is linked to the extent of regulations in the formal sector).

9. Gender issues are introduced in the model via heterogeneity in access to finance, skills, safety, social norms, contribution to household activities, and discrimination (Table 2). Female and male owned enterprises in each sector hire male and female workers and rent capital (financed by bank loans) to produce final goods which are sold domestically or exported to the rest of the world. Financial frictions appear because both types of entrepreneurs face a collateral constraint when borrowing from the bank, and credit limits are affected by the quantity and value of this collateral.5

10. The main contribution of this study is to analyze the effect of financial frictions faced by female entrepreneurs on their labor market outcomes and on macroeconomic performance in India. Although the theoretical and empirical literature on FLFP is vast, the effect of gender-based resource restrictions on women’s labor market outcomes has been less explored. In addition, we also model the inter-linkages of these gender gaps with the informal sector, which has largely been ignored in previous studies (see Khera, 2016b).6

13. Similarly, improved access to credit for females without improving their skills will have limited positive impact. Simultaneously closing the gender gaps in financial access and in skills gives the Indian economy a substantially larger boost, while also leading to higher gender parity in LFP, wages and formal sector employment (“Skills” in Figure 2).

14. What can policymakers do? A range of fiscal and structural measures could be used to promote greater economic participation of women in India. A multi-dimensional policy approach—such as improving financial literacy (especially in rural areas) to boost females’ demand for financial services; spreading awareness of females’ land inheritance to mitigate resource restrictions on women’s access to finance; effective and more targeted implementation of skill training programs for women to enhance their employability across various industries; and easing labor market regulations to promote the creation of formal sector jobs—is needed to help raise female entrepreneurship, FLFP, and formal sector employment that has significant prospective growth and development implications. On the fiscal front, rural infrastructure spending on access to clean water, sanitation and transportation could also reduce the time women spend on domestic tasks and facilitate their access to markets. Continued fiscal consolidation efforts will free up resources for higher infrastructure spending and for higher investment in education and skills training programs, and the government’s push towards business climate reforms (including timely implementation of the GST) will help boost women’s economic participation.

15. Recent financial sector initiatives of the government have seen some success in enhancing various aspects of financial inclusion. More than 240 million previously unbanked individuals, among whom about 47 percent are females, have gained access to bank accounts since the launch of the Pradhan Mantri Jan Dhan Yojana (PMJDY)7 in August 2014. Moreover, the Pradhan Mantri MUDRA8 Yojana (PMMY) scheme has been successful in enabling women-led businesses to access collateral-free finance.9 However, women face multiple and intertwined constraints, and hence single-sector interventions have limited impact. The government should measure the success of its interventions by the extent of rise in females’ formal entrepreneurship, mobility of their firms to medium and large sizes, and by the extent of improvement in females’ labor market participation.

Physical capital is used both as collateral to obtain loans and as an input to production. A shock that reduces the productive capacity of entrepreneurs also reduces their ability to borrow, forcing them to cut back on their investment expenditures and, thus, on their demand for capital. This situation can spill over to the subsequent periods, reducing revenues, production and investments even further.

Womens’ businesses accounted for about one-half of the total amount lent under the scheme, and about four-fifths of the number of loans, in part reflecting scheme’s support to new business undertakings led by women. 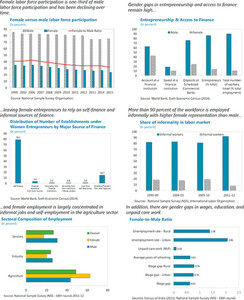 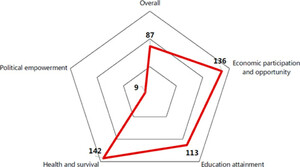 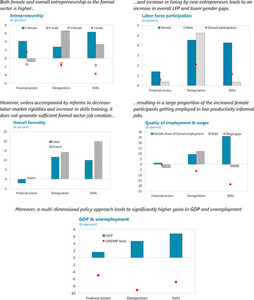