A progressive increase in the recently introduced coal tax (raising it by Rs 150 per year from 2017 to reach Rs 2,500 per ton of coal in 2030) prevents over 270,000 air pollution deaths during its phase-in, and in 2030 raises approximately 1 percent of GDP in new tax revenue, reduces carbon dioxide (CO2) emissions by 12 percent, and generates net economic benefits (domestic environmental benefits less economic costs) of approximately 1 percent of GDP. A more aggressive coal tax (with twice the annual tax increases) has about 75 percent greater environmental and fiscal effectiveness. A carbon tax (applied to all fossil fuels) generates only modest extra health and CO2 benefits compared with a coal tax, while an emissions trading system is less effective (and would add administrative complications). Other measures (e.g., road fuel taxes, renewable and energy efficiency incentives) are considerably less effective. The rising coal tax is mildly progressive, imposing a burden relative to total consumption of about 0.14 and 0.18 percent for the poorest and wealthiest quintiles respectively in 2020 (compensating the former would use about 6 percent of the new revenues) while raising costs for the 10 percent of most vulnerable industries by 1.1 percent on average.

1. India has recently made considerable progress in reforming energy prices. Gasoline prices were liberalized in 2010, and diesel and natural gas prices in 2014. Additionally, India has introduced an excise tax on coal production and imports, currently Rs 400 (about US$6) per ton of coal.

2. There are nonetheless reasons why policymakers may wish to continue the direction of recent fuel price reforms. Further reform can be in India’s own interests as it complements efforts to address rising mortality from exposure to urban air pollution, while also providing an easily collected source of revenue. In addition, reform helps India make headway on its ‘nationally determined contribution’ (NDC) for the 2015 Paris Agreement of reducing the greenhouse gas intensity of Indian GDP 33-35 percent by 2030 relative to 2005 levels2. Going forward, countries are required to submit revised NDCs every five years starting in 2023, which are expected to be progressively more stringent.

3. It is widely recognized that fiscal instruments are the most efficient policies for reducing the environmental costs of fuel use. If appropriately targeted, these policies can exploit the full range of potential behavioral responses across households, firms, and sectors for reducing pollution; if tax levels are set efficiently they can balance environmental benefits and economic costs; and productive use of the revenues offsets costs to the economy from higher energy prices.

4. To choose among instruments, design them, and communicate their case to legislators and the public, policymakers need a quantitative framework for comparing options against key metrics. A background paper for the 2017 Article IV Consultation3 uses a practical spreadsheet model parametrized for India to compare the environmental, fiscal, economic, and distributional incidence impacts of a wide range of fiscal and regulatory policies applied to the energy sector. The model starts with data on fuel use by sector, projects this forward in a ‘business as usual’ (BAU) scenario (with no new policy changes)4, and then estimates the effects of different policies relative to the BAU using evidence (from empirical studies and other modelling results) on the price responsiveness of fuel use and the health impacts of air pollution exposure.5 Incidence analysis is conducted by linking the policy-induced impacts on energy prices from the spreadsheet tool to an input-output model to trace the price impacts on different industries and consumer goods, while combining that with survey data on spending on energy and other products by different household groups in India. There is considerable uncertainty surrounding BAU projections and fuel responsiveness, but the qualitative ranking of policies is robust to different scenarios.

5. In the BAU, the CO2 intensity of GDP in 2030 is 29 percent lower than in 2005, implying (modest) policy intervention is needed to meet the NDC for CO2 (Figure 1a).6 Declining emissions intensity primarily reflects a progressive decline in the energy intensity of GDP (due to improving energy efficiency, gradually rising fuel prices which dampen growth in fuel demand, and an assumption that energy products are necessity goods). However, coal still accounts for half of projected primary energy use in 2030. Estimated premature deaths from outdoor air pollution from fossil fuel combustion rise from about 200,000 in 2015 to 400,000 in 2030 with greater coal use and rising urban population exposure to pollution.7

6. Progressively raising the coal tax is an effective way to reduce CO2 emissions (Figure 1b). Aggressively increasing the coal tax by Rs 300 (about US$4.50) per ton of coal each year from 2017 to 2030, bringing the total tax in 2030 to Rs 4,600 (about US$69) per ton of coal, equivalent to Rs 2,460 (about US$37) per ton of CO2, reduces CO2 emissions by 7 and 21 percent below BAU levels in 2020 and 2030 respectively. A ‘modest’ version of this policy, with annual tax increases of Rs 150 (about US$2.25) per ton of coal bringing the total 2030 tax to Rs 2,500 (about US$38) per ton of coal, cuts emissions by 4 and 12 percent in 2020 and 2030 respectively (this is more than sufficient to meet the current NDC, which requires a reduction in projected emissions of 4–6 percent in 2030). A carbon tax (with the same CO2 charge as in the aggressive coal tax applied to natural gas and oil products as well as coal) is only slightly more effective than a coal tax (as coal accounts for over 70 percent of fossil fuel CO2 emissions in the BAU and it is significantly more responsive to carbon pricing than other fossil fuels). An aggressive emissions trading system (ETS) applied to power generation and large industrial emissions sources has about 75 percent of the effectiveness of the carbon tax (for the same emissions price), and would involve significant new investment in administrative capacity. Other policies (road fuel taxes, renewables subsidies, energy efficiency policies for different sectors, electricity taxes) are significantly less effective.

7. The relative performance of different policies in reducing air pollution deaths follows a similar pattern to the relative reductions in CO2 emissions (Figure 1c). For example, coal taxes are marginally less effective at reducing deaths than corresponding carbon taxes, while the ETS is about 70 percent as effective. The aggressive variant of the coal tax would save about 490,000 lives as it is phased in over the 2017–2030 period, the equivalent carbon tax about the same amount and the equivalent ETS about 340,000, while the modest coal tax would save about 270,000 lives.

8. Higher coal taxes also raise substantial revenues (Figure 1d). The modest coal tax raises revenues of about 0.3 and 1.0 percent of GDP in 2020 and 2030 respectively (in excess of revenues collected with no change in the tax rate), while the aggressive coal tax raises about 70 percent more revenue. The carbon tax raises about 40 percent more revenue than the equivalently scaled coal tax (due to its significantly larger tax base) while the ETS—if allowances are auctioned—and the electricity tax raise revenues of about 60 and 45 percent respectively compared with the equivalently priced carbon tax (the ETS, for example, does not raise revenue from road transportation and small industrial and household energy users).

9. The modest coal tax generates a net economic benefit of 1 percent of GDP in 2030. The tax results in an economic welfare cost of about 0.1 percent of GDP (due to coal users consuming less than they would otherwise prefer) but this is easily outweighed by domestic (i.e., excluding climate change) environmental benefits of about 1.1 percent of GDP (primarily local air pollution benefits).

10. Fuel tax reform imposes a larger relative burden on higher income households (Figure 1e). The modest coal tax is mildly progressive, imposing a burden relative to total consumption of about 0.14 and 0.18 percent for the poorest and wealthiest quintiles respectively in 2020 (in part reflecting higher rates of vehicle ownership and grid access among higher income households). A carefully designed expansion, and improved targeting, of social safety nets (the Public Distribution System and the Mahatma Gandhi National Rural Employment Guarantee Act public works program), especially if combined with improved Aadhaar-based targeting, could help to compensate the poorest households for higher energy prices8 and need use only around 6 percent of coal tax revenues.

11. The modest coal tax raises costs across all industries by on average about 0.2 percent in 2020, or for the 10 percent of most vulnerable industries (e.g., iron and steel) by on average about 1.1 percent (Figure 1f). These figures are an upper bound on any temporary compensation that might be provided to firms to ease transitions as, at least for industries competing in domestic markets, most (if not all) of the cost increases are likely passed forward in higher consumer prices and for those competing in global markets there is less need for compensation if other countries progress on their Paris pledges.

12. Continued fuel tax reform promotes sustainable economic growth by ameliorating increasingly acute environmental challenges and providing revenues for socially productive investments. Moreover, by contributing to coordinated efforts from the international community to slow global warming, fuel tax reform will also reduce the negative impacts climate change will have in India, such as pressures on agriculture and coastal resources. Given the very large domestic benefits from fuel tax reform, India could move ahead unilaterally without waiting for other countries to act.

Projected energy use and emissions are somewhat higher than those for India in IEA (2016), Annex A, ‘Current Policies Scenario’, mainly due to assumptions that energy prices rise more gradually.

The latter are updated from Parry and others (2014).

Indoor air pollution deaths are larger still at 340,000 in 2015 though they rise more slowly with the progressive substitution of electricity for residential biomass combustion.

See Abdallah and others (2015). Subsidies for a ‘subsistence’ amount of electricity consumption, or for clean fuel technologies (e.g., solar water heaters) used by the poor, may also have a role.

The Large Benefits from Higher Coal or Fossil Fuel Taxes 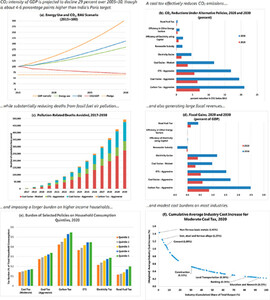