UBI proposals aim at providing universal and unconditional basic income to all Indians. While UBI may help overcome failures of the current system, concerns on fiscal affordability and political feasibility weigh heavily on public discussions. UBI for India will need to be carefully reviewed, in order to balance its potential benefits and costs while ensuring India’s fiscal sustainability.

1. Universal basic income (UBI) is an old idea but has recently received widespread attention in both the developed and developing world. The discussions on basic income developed in the 1970s and 1980s. In particular, the libertarian economist Milton Friedman advocated a minimum guaranteed income in the form of a negative income tax in 1962. More generally, UBI is often interpreted as an income unconditionally granted to all on an individual basis without means test or work requirement at the level enough to live on even if they do not earn anything (Ghosh, 2016). In developed countries such as Switzerland, Finland, the Netherlands and Canada, the concept of UBI has caught on with policy makers on the back of decades of stagnant wages, rising inequality, job losses from production relocation and job-killing automation. In the developing world, interest in UBI centers around its ability to reduce poverty and social exclusion.

2. In India, the existing social protection system—primarily delivered through subsidies—has flaws. India has a range of social programs aimed at supporting the income and consumption levels of lower-income households. Some key programs comprise food, fertilizer and fuel subsidies. The Government of India has made strong progress on subsidy reforms in recent years, and as a result, expenditure on subsidies declined to about 1.5 percent of GDP in FY2016/17 from 2.5 percent in FY2012/13. Nonetheless, these subsidy schemes are often associated with high administrative costs and ineffectiveness, particularly leakages of subsidized products to non-targeted better-off people (see Anand et al (2014) and Abdallah et al (2015)).

3. UBI is therefore considered as an alternative to help overcome the failures of the current system. Table 1 summarizes the arguments for and against the establishment of a UBI scheme. If carefully designed as part of a strategy to reform an inefficient social protection system, UBI may play a role and help reduce waste and inequality. Nevertheless, concerns related to fiscal costs and affordability also weigh heavily on public discussions.

Arguments for and against UBI Scheme

Arguments for and against UBI Scheme

4. India’s UBI proposals are for universal and unconditional basic income with a few variations (Table 2). Bardhan (2016) presents a UBI calculation fixing the unconditional basic income at an inflation-indexed Rs 10,000 at 2014/15 prices, which is about three-quarters of the official poverty line in 2014/15 or 15 percent of the average wage in India. Under this proposal, this amount would be paid annually to each person in India. With a population of 1.25 billion in 2014/15, the cost of UBI comes to about 10 percent of GDP and will be financed by a portion of existing subsidies and the termination of some tax holidays and exemptions. Similar to Bardhan’s proposal, Banerjee (2016) proposes a UBI of Rs 250 per week to every adult resident who verifies their identity every week. Alternatively, Ray (2016) has put forward the idea of a social dividend in the form of universal basic income as a fixed share of GDP, but the level will be varied each year. In addition, Gokarn (2016) suggests that UBI include an opt-out option.

Source: Ideas for India, The Idea of a Universal Basic Income in the Indian Context.

Three-quarters of the official poverty line at 2014/15 prices.

Source: Ideas for India, The Idea of a Universal Basic Income in the Indian Context.

Three-quarters of the official poverty line at 2014/15 prices.

5. There is no clear evidence of cross-country experiences with UBI. Table 3 presents the structure of UBI scheme across countries and the latest status of each scheme. Comparing UBI across countries, India’s UBI proposals come closest to that of Switzerland and Brazil, as the scheme is truly universal and unconditional. Nevertheless, UBI in Finland and the Netherlands is much more limited in which basic income will be provided to persons currently receiving government benefits; thereby reshaping the existing welfare system. To date, Switzerland rejected its UBI referendum in June 2016. Finland, the Netherlands, and Ontario province of Canada will begin small-scale experiments of UBI schemes in 2017. Brazil’s privately run UBI pilot project is still ongoing. A full assessment of each UBI scheme as yet remains to be seen.

6. A UBI pilot program in an Indian state appears to have helped improve the quality of spending on nutrition, health, education as well as the investment in productive assets. The United Nations International Children’s Emergency Fund (UNICEF) and the Self Employed Women’s Association (SEWA) established a pilot program for an unconditional cash transfer experiment in rural areas of the Indian state of Madhya Pradesh in 2012 (SEWA, 2014). The basic income was paid every month to all individuals within a village, without any conditionality. The program initially paid Rs 200 per month for each adult and Rs 100 per month for each child, then the amounts were raised to Rs 300 and Rs 200 per month, respectively. These amounts were calculated at between 20 and 30 percent of the income of families in the lower-income scales, or about one third of the 2011/12 poverty line. The program covered 6,000 individuals for a period of 29 months, and the basic income was disbursed through either bank or cooperative accounts. SEWA (2014) finds the basic income scheme helped enhance both food sufficiency and enabled a qualitative shift in the food basket, improved the affordability of health services and education, increased the investment in better sanitation and access to drinking water, as well as reduced the burden of households to fund their health and education services through borrowing.

7. To be able to pay out a meaningful basic income, there is a need to free up significant fiscal space. In this exercise, UBI is calculated according to how much basic income a government could pay out if it scraps its non-health transfer payments and spreads them evenly across the population in an annual single payment. Finland and the Nordic countries, for example, come out among the highest basic income payouts, given relatively large fiscal space that can be available for UBI. For Mexico and some other emerging economies, on the other hand, basic income based on a budget-neutral calculation would yield only a small and insufficient fraction of the country’s living standard, or the country would need to raise taxes significantly or borrow extensively. UBI for India, proposed at about Rs 10,000 per year, is the lowest among emerging economies, but its feasibility and affordability has yet to be determined.

8. Fiscal costs of UBI for India appear to be considerable and would likely require a significant amount of additional financing (Table 4). Taking Bardhan’s proposal as an example, the estimated costs of UBI could reach 10 percent of GDP in 2014/15. While the proposal suggests that UBI can be fully financed without an additional financing requirement and the simplicity of UBI design may help reduce the administrative costs in comparison with current subsidies, the available government budget seems likely to be insufficient to fund this UBI proposal. Total subsidies on food, fertilizers, and fuel account for only 1.5 percent of GDP in FY2016/17; therefore, Bardhan’s UBI proposal would require large additional financing needs of about Rs 10 trillion or 8 percent of GDP. This UBI scheme appears unaffordable without significant tax increases or additional government borrowing.

9. Other impacts remain uncertain without more granular details on UBI. The potential impact of UBI will largely depend on the level of basic income provided. If it is too small, the impact on poverty reduction may only be negligible. If it is too large, there may be an impact on labor force participation due to disincentives to work. Cash transfers to the poor (with the highest marginal propensity to consume) may help boost consumption and growth, but their efficacy will also depend on what they spend or invest. Increased spending could also put additional pressure on India’s already-high rate of inflation.

10. The potential introduction of UBI in India needs a thorough ex-ante analysis of its redistributive impacts and fiscal costs. In principle UBI could be beneficial, if it is replacing a social assistance system that is very fragmented and inefficient. However, the design of UBI will have to balance its potential benefits and costs while ensuring India’s fiscal sustainability. In particular, it should take into account: 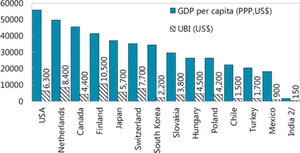