Center-state fiscal arrangements entail a sizable redistribution of resources across the Indian states. They enable achieving the goal of income redistribution from richer to poorer states, as well as partial insurance against regional macroeconomic shocks. However, overall transfers from the center to states appear to be pro-cyclical with respect to both regional and common macroeconomic shocks. There is room to improve the stabilization features of India’s central government finance, strengthen the budget frameworks of the states, and rebuild fiscal space to support growth.

1. Center-state fiscal arrangements entail a sizable redistribution of resources across the Indian states. State-wise variation in the size of gross transfers from center to states (as a share of gross state domestic product (GSDP)) primarily comes from the variation in the grants component of gross fiscal transfers, and is largely driven by sizable grants from the center to a handful of smaller states. In turn, for the sixteen major states, which account for over 90 percent of India’s population and close to 90 percent of its gross domestic product, most of the variation in gross fiscal transfers appears to be due to differences in their share of the divisible pool of the center’s tax revenues. Lastly, the collection of key central government revenue varies significantly across the jurisdictions, with just a handful of states (Gujarat, Karnataka, Maharashtra, Tamil Nadu) as well as the National Capital Territory of Delhi having relatively large ratios of the revenue collected towards the central government (or Union) budget relative to size of their economies, primarily on account of direct tax collection. The financial relationships between the Union and the states continue to evolve, including as a result of the changes to the fiscal devolution as per adoption of the recommendations of the Fourteenth Finance Commission and impending implementation of the Goods and Services Tax, therefore, understanding the economic implications of fiscal federalism will remain a key fiscal policy issue in India.2

2. Fiscal transfers in federations play several roles, such as closing vertical imbalances, achieving redistribution goals, and insuring states or union territories against macroeconomic shocks. The insurance function could be subdivided in two: insurance against common shocks simultaneously hitting all the states of India, and insurance against idiosyncratic macroeconomic shocks hitting individual states. They also serve to enhance redistribution from richer to poor states and help ensure convergence of cross-state disposable incomes. Disentangling the redistribution, stabilization, and risk-sharing roles of fiscal transfers is complicated in India as center-state fiscal transfers affect all roles simultaneously.

3. The central government budget of a federation can enhance insurance against macroeconomic shocks. First, it provides a stabilization function (or intertemporal insurance) to deal with shocks common to all states, and second it pools risks emanating from idiosyncratic shocks across states and enables risk-sharing (or interregional insurance). The importance of risk-sharing in federations comes from the fact that in the absence of state-specific exchange rates, shocks affecting individual states’ incomes cannot be cushioned by changes in their internal terms of trade. In addition, households have limited capacity to smooth regional shocks if markets for production inputs (labor and capital) are not mobile, or if private credit markets do not function properly. Arguments in favor of centralizing counter-cyclical fiscal policy relate to scale economies benefitting the central government in the performance of the stabilization function (easier policy coordination, the public good nature of macroeconomic stabilization). An important factor is the ability of the central government to borrow on better terms than those available to individual states.

4. The strength of various channels of resource redistribution between the center and the states is analyzed in this chapter, following Poghosyan and others (2016). The following econometric specification is estimated on state-level data:

5. Our empirical results point to a sizable redistribution function of fiscal transfers (Table 1). This is mostly achieved through transfers from the center to states, with the center’s grants to states playing a key role. The devolution of the center’s revenues to states is also supporting redistribution, but the magnitude of the coefficient is smaller when compared to grants (column 3 vs column 4). When it comes to redistribution as a result of state-wise variation in the collection of central government tax revenues (column 1), while the sign of the coefficients is correct (positive), they are not statistically significant. One reason for this lack of econometric evidence could be that direct taxes as a share of GDP are relatively small and just a handful of states provide the lion’s share of this revenue (Maharashtra, Delhi, and Karnataka account for over 60 percent of the center’s direct tax receipts). For net fiscal flows—that is the difference between transfers to a state and the center’s tax revenue collected in a state—the redistribution coefficient is of the expected negative sign, and is statistically significant at close to the 10 percent level.

6. The empirical evidence on insurance motives, with respect to both interregional risk-sharing and macroeconomic stabilization, reveals deficiencies in the design of fiscal transfers.

7. Overall, the redistribution impact in India is on par with other federations, while the stabilization function of transfers is more a feature of advanced economies’ central budgets. Compared to the results for the fiscal federations of the United States, Canada, and Australia (Table 2), as reported in Poghosyan and others (2016), India’s fiscal federalism has a broadly similar impact on redistribution. Canada, for example, has the strongest redistribution channel, where such a mandate is constitutional. However, data coverage for India differs from these federations, specifically as transfers to individuals from the central budget are not available by Indian states as opposed to such data being available for other federations, so the size of the effect of fiscal policies in India may be understated. Finally, inter-regional risk-sharing is present in the United States, but is not found to be statistically significant in either Australia or Canada. The interregional risk insurance role of fiscal transfers may be limited given the synchronized nature of states’ business cycles and enhanced private risk-sharing facilitated by fiscal centralization. Overall, stabilization appears to be a feature of advanced economies’ central budgets.

Sources: IMF staff estimates, results for other federations from Poghosyan and others (2016).Note: Covers 27 states and union territories with available data for 1996-2014. Positive output gap signifies excess demand. Robust standard errors are in parentheses for India, t-statistics for other federations, constant terms not reported.
Table 2.

Sources: IMF staff estimates, results for other federations from Poghosyan and others (2016).Note: Covers 27 states and union territories with available data for 1996-2014. Positive output gap signifies excess demand. Robust standard errors are in parentheses for India, t-statistics for other federations, constant terms not reported.

8. Indian states’ own revenues and expenditures co-move with state economic cycles. Staff analysis suggests that correlation of states’ own tax revenues with their economic cycles have declined slightly in the last decade, while states’ capital expenditures have become counter-cyclical with respect to their economic cycle, although this link appears to be weak (Table 3). However, a key concern from the viewpoint of states’ financial health is the increase in the correlation of states’ revenue expenditures with states’ economic cycle, as room to compress state revenue expenditures in a downturn may be constrained going forward. Specifically, downward adjustment on non-developmental revenue expenditures, which are largely precommitted in nature,4 may be difficult, while reducing developmental and social expenditures may be undesirable. In addition, a potential rise in wage and pension commitments as a result of the recent civil servants’ pay review could also further limit downward flexibility of revenue expenditures going forward. Furthermore, greater devolution of central government’s tax revenues, which provides states with greater autonomy, makes the case for strengthening states’ fiscal responsibility and budget frameworks more compelling.

Sources: IMF staff estimates based on methodology of Kaminsky, Reinhart, and Végh (2004).
Table 3.

Sources: IMF staff estimates based on methodology of Kaminsky, Reinhart, and Végh (2004).

9. As budget deficits in many states are hovering close to their borrowing limits, the ability of the states to respond to economic shocks may be limited. Even though states have been required to seek approval for market borrowing from the center, some forms of borrowing were not effectively constrained in the past. This enabled a sharp rise in states’ debt ratios in the late 1990s, which took considerable time to reverse. The Twelfth Finance Commission helped strengthen the states borrowing regime as the central government stopped intermediating in state borrowings and states followed the center’s Fiscal Responsibility and Budget Management framework by adopting fiscal responsibility frameworks and fiscal rules (Simone and Topalova, 2009). However, in the last few years aggregate gross fiscal deficits of the states have generally hovered very close to states’ borrowing limits, with aggregate deficits of the states rising towards about 3 percent of GDP. Staff analysis on the basis of a panel Vector Autoregression (VAR) model for Indian states5 suggests that states’ gross fiscal deficit to GSDP ratios deteriorate by about 1 percent of GSDP cumulatively over the two years following a negative one standard deviation shock to GSDP growth. Thus, with limited fiscal space given near-binding borrowing ceilings in many states, in the event of a negative economic shock, states may either breach their borrowing ceilings or may need to engage in pro-cyclical fiscal adjustment.

Various aspects of the fiscal transfers from the Union to the states in India have been examined by the Finance Commission, which is a constitutional body established every five years with the primary purpose of determining the sharing of centrally collected tax proceeds between the central and state governments and the distribution of grants-in-aid of revenues across states.

Insurance measures the extent to which fiscal transfers offset regional disposable incomes from temporary shocks to regional output. For instance, a coefficient of -0.1 implies a level of insurance of 10 percent that the disposable income of a given region would fall by 90 rupees in response to a temporary decline in its output by 100 rupees. This temporary decline in output could be either relative to the national average output (risk-sharing) or a simultaneous decline in output across all regions (stabilization).

The panel VAR model fits GSDP growth, state’s private and public investment growth, and state’s overall fiscal balance. The objective of this analysis is to disentangle the dynamic adjustment of gross fiscal deficits over the first few years after a GSDP growth shock, rather than on identifying long-term adjustment processes. Advantages of a panel VAR approach include the use of the information in the cross-sectional dimension of the data when time series is short while also controlling for heterogeneity.

(In percent of GSDP) 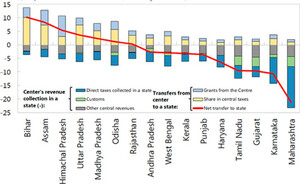 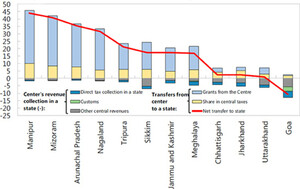 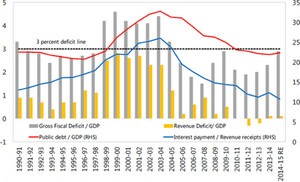 Sources: IMF staff estimates based on methodology of Kaminsky, Reinhart, and Végh (2004).