Addressing The Burden Of Tax And Social Security Debt1

A. Characteristics and Evolution of Debt to the State

1. Greece’s tax and social security debt to the state is by far the highest in Europe. It has reached about €115 billion, or close to 70 percent of GDP. Almost half of taxpayers and half of social security contributors (SSC) are in debt to the state. This excessively large debt burden weighs on the balance sheets of companies and individuals, hindering investment, consumption, and the resumption of growth. Moreover, it burdens the already weak tax administration, as tax officials’ efforts are stretched by the large and growing amounts of debt to the state.

3. Tax debt has increased at a rapid pace. Since the onset of the crisis, the tax debt has more than doubled, growing at a rate of about €1 billion per month in recent years. As to its composition, around 40 percent is due to penalties and fines, with less than half on account of direct and indirect taxes. The structure and evolution of tax debt can be explained by a variety of factors:

4. Social security contribution debts are also large and increasing rapidly. They currently amount to about €20 billion, or about 12 percent of GDP.3 Most of the debts (close to 9 percent of GDP) relate to the largest social security fund (IKA-ETAM), which has experienced a doubling of the SSC debt level during 2012-15. About 40 percent (1.6 million) of all contributors were in debt at end-2015. Similar to tax debt, the surge in SSC debts is largely due to a weak payment culture and the deep recession, coupled with weak collection enforcement capacity. Also, the system of SSC assessment based on notional income may have worsened the problem, as contributors who earn an actual income below the notional income may not have the financial capacity to stay current on their SSC obligations.

Source: Ministry of Labor of Greece.

Source: Ministry of Labor of Greece.

5. Tax administration practices did not alleviate the tax and SSC debt accumulation and may have even exacerbated the problem. Various reforms have been attempted to modernize the tax administration and improve revenue collections, including an overhaul of the tax procedure code, including the redesign of installment schemes and revision of fines and surcharges; institutional reforms aiming to establish an autonomous revenue agency and set up units for large taxpayers, high-wealth individuals, and large debtors; and the creation of the dispute resolution unit aimed at accelerating procedures. However, the reforms did not lead to the expected outcome, either because the design of the measures was not effective (e.g. installment schemes were not targeted, and the autonomy of the tax administration was compromised by continued political interference), or because reforms were not fully implemented (e.g. risk-based audits and the prioritization of debt collection remained hampered by other legal obligations and practices). Limited capacity also constrained reform implementation. As a result, some of the measures that were introduced to address the accumulation of tax and SSC debt were not only ineffective, but may have contributed to exacerbating the problem, as discussed below.

6. First, the system of fines and penalties remains counterproductive, adding to the debt problem. The Greek tax administration imposes multiple and large fines. Although the system of fines was significantly simplified with the introduction of a modern Tax Procedure Code in 2014, the majority of fines continue to be based on the previous complex system.4 Moreover, tax officials remain obliged to impose fines whenever the objective criteria have been met, regardless of circumstances (e.g. companies that already have excessive tax arrears and for which no person has been or can be held jointly liable for the penalties are still subject to fines). As a result, fines and penalties have more than tripled since 2010, and in 2016, the amount of assessed fines and penalties exceeded the amount of assessed current taxes. Such punitive assessments, instead of acting as a deterrent for tax avoidance, have added to the stock of tax debt. For example, about two thirds of 2016 penalties assessed through October are due to reassessments of penalties already in arrears, pointing to the ineffectiveness of such methods and to deep inefficiencies of the revenue administration (also see below).

7. Second, the current legal framework prevents the effective classification of tax debt as uncollectible and is overly restrictive regarding debt write-offs. Although recent legislation allows for classification of uncollectible tax debt, procedures are cumbersome and time consuming. For example, debts to the state can be considered uncollectible only if all required investigations have been completed, validating that no assets or claims against third parties of the debtor and persons jointly liable were recorded, no sale of assets could have been annulled, criminal prosecution has been lodged, and the recovery of the revenues is objectively impossible. Completing such a procedure takes significant time. Moreover, the law allows for write-offs or cancellations of such uncollectible debt only if a number of specific conditions are met, related to unsuccessful investigations and enforcement actions. Decisions on the cancellation of tax debts are thus hampered by extensive legal requirements, and also by the fear of personal liability.

8. As a result, Greece lags its peers with respect to debt write-offs, despite most of the debt being uncollectible. The share of tax debt that is written-off in Greece is around 10 percent, lower than in many peer countries and the Euro Area average (of 15 percent).5 This is notwithstanding the very high level of total tax and SSC debt in Greece compared to peers, of which a large part is not collectible. Specifically, about half of the stock of large tax debts—which is more than 60 percent of the total tax debt—is largely owed by debtors in bankruptcy or special liquidation and by inactive companies, while more than 55 percent of tax debt is older than 3 years, for which the collection rate is below 2 percent. And, as noted above, 40 percent of tax debt is due to penalties and fines, for which collection rates are around 1 percent. Similarly, although the legal framework and classification are not well developed yet, a large share of SSC debt could also be considered uncollectable, as more than 80 percent of SSC debt is older than three years, with a collection rate of about 2 percent.

9. Third, collection prioritization and enforcement are weak, and untargeted installment schemes have further undermined the payment culture. Lack of adequate prioritization of audit cases, combined with insufficient capacity or ability to enforce debt collection, and with untargeted installment schemes have perpetuated the accumulation of debt. Specifically:

10. In view of the large and growing tax and SSC debt, durable solutions to prevent new tax and SSC debt accumulation and reduce the existing debt stock are urgently needed. Large tax and SSC debt overhang puts a drag on economic activity, impedes taxpayers’ capacity to pay current tax obligations, and contributes to a vicious circle of tax debt accumulation and meager growth. The scale of tax debt—affecting millions of taxpayers—also strains the tax administration, which has limited capacity to cope with the problem, while striving to modernize its institutions and operations and raise its credibility by ensuring efficient revenue collection and effective services to taxpayers. Bold measures are thus needed to cease the pattern of increasing tax and SSC debt and unlock economic and tax administration resources for more efficient uses. These should go hand in hand with fiscal policies that broaden tax bases and allow for lower tax rates.

11. First, the authorities should measure the full scale of the existing tax and SSC debt problem by assessing tax debtors’ financial situation. The economic downturn has made such an assessment particularly difficult, as the associated uncertainty hampers the ability to determine the future financial prospects of individual taxpayers. Notwithstanding these difficulties, the authorities need to develop a common methodology to classify debtors according to their financial viability, taking into account information on both public (i.e. tax and SSC) and private (i.e. bank, suppliers, etc.) debts, assets, and projected cash flow, taking into account the taxpayer’s compliance record and reason for accumulating arrears. Understanding debtors’ past behavior and intentions regarding their tax obligations could help distinguish potential strategic defaulters from tax debtors in temporary financial distress. A comprehensive look at their balance sheets and cash flow projections (with focus on key indicators, such as income to debt ratios, EBITDA, etc.) can also help distinguish between solvency and temporary liquidity problems (i.e. between non-viable and viable tax debtors). A methodology with objective criteria could also help address the officials’ fear of personal liability as they would be guided and protected by a formal framework in their decision to categorize tax debts as uncollectable or eligible for write-off.

12. Second, the authorities need to make use of all available tools to restructure existing tax debts in a targeted manner, with a view to preserving taxpayers’ viability. Across-the-board solutions—such as installment schemes—that have been tried and failed in the past, should be avoided, as they jeopardize payment culture and exacerbate debt accumulation. Instead, the authorities should develop targeted solutions in line with taxpayers’ financial viability and ability to pay. Specifically:

13. Third, to prevent a further accumulation of tax debt, tax administration practices need to be aligned with modern approaches used in advanced economies:

A regression analysis based on a panel of European Union countries found a positive and significant relationship between VAT efficiency and the output gap (Brondolo, 2009). Furthermore, Sancak et al. (2010) find that VAT efficiency is hindered by changes in tax evasion during economic downturns.

The figures are related to the four main SSC funds.

Prior to 2014, fines and penalties were regulated by complex legislation under the Code of Books and Records, which lacked proportionality between the penalty size and the seriousness of the violation and, thereby, punished severely minor accounting errors.

In 2008, the share of debt written off in total debt inventory was around 1 percent in Greece compared to a Euro Area average of 22 percent (the country composition of the Euro Area group in these calculations differs between 2008 and 2013 due to data availability).

The Code of Public Revenue Collection has not yet been aligned with the amended Code of Civil Procedures, which streamlined the auction process for foreclosed real estate, allowing the minimum bidding price to be determined by market prices. See also Selected issues paper “Insolvency and Enforcement Issues in Greece.”

The existing framework does not cover public claims. As a result, banks have no incentive to restructure their debts, as they perceive the public sector to receive preferential treatment. Also see Selected issues paper “Insolvency and Enforcement Issues in Greece.”

Private Sector Debt to the State 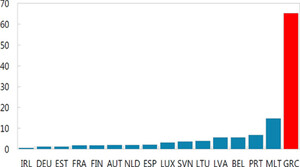 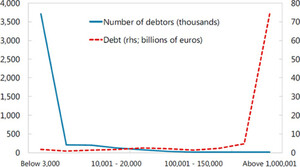 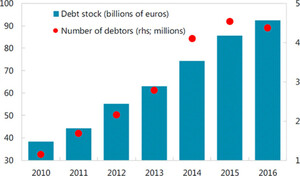 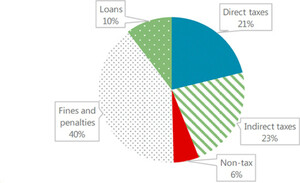 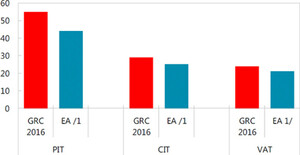 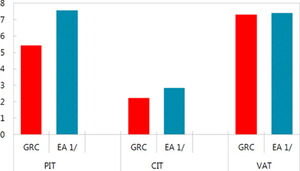 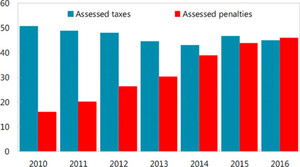 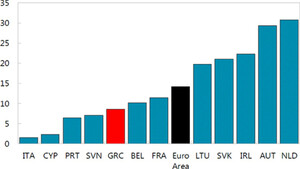