After a decade of a vibrant development Turkish tourism sector was hit by a major fall in foreign tourists’ arrivals. This study takes stock of recent developments and considers potential spillovers from tourism sector to other parts of the economy. It finds that a negative shock to foreign arrivals had a significant impact on the economic activity in 2016, while the recovery prospects remain subdued.

A. Inbound Tourism in Turkey: an Overview

1. By 2015 Turkey became one of the most popular touristic destinations in the world. Turkey’s share in the global inbound tourist flows increased from 1.5 percent in early 2000s to about 3 percent in 2015. Over that period the number of foreign tourists’ arrivals tripled and reached 36 million people. This was mainly driven by visitors coming for travel and entertainment (up 146 percent since 2004); the increase in the number of business related visits and shopping tours was relatively modest (about 6–11 percent).

2. Large part of the increase in tourist arrivals over the last decade came from emerging market and developing countries. In 2015 the top three source countries by the number of tourists were Germany (5.6 million), Russia (3.6 million), and the UK (2.5 million). With a combined share of EU countries over 50 percent (Figure 1), advanced economies remain the most represented clientele. At the same time, over half of the increase in tourists’ arrivals between 2004–2015 was due to EMDCs. As a result, the average level of expenditures by foreigners did not change much since 2004, and even decreased slightly in 2015 (Figure 2).

3. Neighbors’ income growth and improved Turkey’s competitiveness facilitated the pick-up in demand.2 Income growth in the main source countries, especially in EM, was particularly strong before the GFC and slowed down noticeably in the recent years. (Figure 3). In the meantime, REER depreciated vis-a vis developing economies by over 30 percent since 2003. Surveys show that compared to other destinations, as of 2015 the average cost of a daily meal per tourist outside the hotel of residence was comparable to Egypt, and roughly 10–15 percent lower than in the main European and Asian touristic destinations.3

4. Accessibility and accommodation capacity have improved substantially Airlift supply is often found to be an important determinant of foreign tourist arrivals.4 Between 2003 and 2014 the number of airports in Turkey has increased to 52 from 26, while the national carrier, Turkish Airlines, has expanded the list of destinations to 280 countries. Maritime transport was also on the rise, but mainly due to freight. In addition to that, in 2007 the government launched a sector development program (Strategy 2023), which included investment incentives, measures to address transportation and infrastructure bottlenecks, and marketing activities. In 8 years, country’s capacity to acccommodate tourists increased 2.5 time, and the total bed capacity of accommodation facilities exceeded 1,250 thousand.

5. Removal of barriers for tourist arrivals, improved general perception of the country, and normalization of the security situation, have also contributed to sector growth. According to UNWTO, as of 2011 Turkey had the most open visa policies towards their current source markets among G20 with just 3 percent of foreign tourists requiring visas.5 Anecdotal evidence suggests that visa free travels for Russian tourists introduced in 2011 and further relaxation of the visa regime in 2013 helped to divert some tourists from Egypt. The later provides similar type of vacation and is often considered as a close substitute for holiday travel (Figure 5). On the other hand, minimal number of terrorist attacks between early 2000s and 2013 (Figure 6), marketing activities, and positive developments in the EU accession process supported tourists’ interest in the region.

B. Security Uncertainty and Its Implications for the Turkish Tourism Sector

6. Foreign tourists’ arrivals fell sharply in 2016 due to rising security concerns and travel restrictions. Consistent with the global trend and the regional dynamics, the number of incidents in Turkey increased dramatically in the last few years.6 According to the Global Terrorism Database, the total number of registered attacks exceeded 400 in 2015 (as compared to an average of 70 in 2010–2014), including at least 40 episodes in the key touristic areas. In the course of 2016 the security level assigned to Ankara and Istanbul by the UN, was raised to moderate from minimal/low a few years ago. In addition to that, at the end of 2015, Russia have introduced restrictions on its economic relationships with Turkey, including sanctions on charter flights and sales of travel tours. In January-September 2016, the number of tourist arrivals from Europe dropped by over 30 percent and from Russia by more than two-thirds. This contributed to about 30 percent drop in exports of transportation services, and had negative spillovers to the food & accommodation sector.

7. Studies show that repeated incidence of violence tend to have long-lasting effects on tourist arrivals.7 Analysis based on case studies show a big dispersion of the time (from a few weeks to a few years) required for the tourists’ inflow to reach its pre-crises level. These case studies, as well as cross-country econometric analysis of the effects of violence on travelers’ preferences have identified a number of factors that can shape tourists’ reaction and its longitude. First, tourists’ reaction can come with a lag. Second, frequency may be more important than severity, especially if combined with political uncertainty. At the same time, security concerns over the neighboring region may have positive as well as negative spillovers. Third, areas providing ‘scandalized travel goods’ tend to suffer more, as tourist demand appears to be more sensitive to negative news and tend to switch easily to other locations with similar characteristics.

8. Recovery prospects remain subdued in the near term. Given remaining political uncertainty and high share of ‘sun-shine’ travelers, recovery of the tourist arrivals to historical heights may take a few years. Anecdotal evidence suggests that EU tourists tend to book at least 4–6 months in advance, which means that the next year season may be affected by the recent attacks. The response to sanctions would probably be asymmetric: demand dries up quickly on the introduction of restrictions, but tend to recover only gradually after the sanctions are removed. While Russian restrictions on travels to Turkey were lifted in 3Q 2016, the tourist inflows may remain weak due to security uncertainty.

C. Shocks to Tourism and the Broader Economy

9. Tourism has become an important sector of the Turkish economy. In 2015, travel services earned around US$27bn of exports revenues (3.7 percent of GDP and about 13 percent of total export proceeds). In selected regions, it is one of the key employers. Overall, the tourism sector was estimated to directly generate over 600 000 jobs (2.3 percent of the total employment), with about two-thirds of jobs associated with foreign tourism. Additionally, approximately one million of jobs is created indirectly.8

10. In this study the potential near-term economic effect of shocks to tourism is studied under a VAR framework. The choice of the methodology is driven by the lack of up to date detailed data on the structure if the economy, which have shifted significantly in the recent years. Large-scale CGE (Computable General Equilibrium) models are often presented in the literature as a superior approach for analyzing intersectoral linkages. These models are rich in structural details, but less focused on short-term dynamics and forecasting, and require significant data inputs for calibration. The exercise presented in this paper focuses on a 1–2 years impact of a shock to tourism on other sectors and GDP. Time series methods could be considered as a good alternative in this case.9 However, standard VAR models normally require large number of observations to get powerful estimates. The approach used here relies on a Bayesian method. By shrinking the estimated parameter space, it allows to mitigate the issue of relatively short time series available for Turkey.

11. Four BVAR models were estimated using alternative indicators for the tourism sector (Annex I). The set of indicators used in the models include:

12. Given linkages between tourism and other sectors, a 10 percent shock to foreign arrivals is estimated to have 0.2–0.3 percent impact on GDP (annualized).11 This accounts for the fall in real GVA in food & accommodation and transportation of about 0.8–1.7 percent and 1.3–2.0 percent respectively. Based on median responses, the model predicted that absent of policy measure to offset the impact of the weak tourism sector and other positive shocks GDP would decelerate to around 2 percent in 2016.

13. Two recovery scenarios are considered to assess a potential impact of stronger tourism sector on growth in the future (Table A.3). Under a “quick recovery” scenario tourist arrivals (revenues) reach the pre-shock trend level already in 2017. However, as it was discussed in Section B, a more likely scenario would probably involve a gradual pick up in the sector. Under a “slow recovery” scenario tourist arrivals (revenues) remain below the trend till the end of 2018. The total GDP impact is calculated as a weighted sum of responses of the three sectors. A quick recovery would lead to an output growth of around 1 percent higher in 2017 and an additional 0.3 growth acceleration in 2018. This come with 5–8 percent higher value added in the most affected sectors. On the other hand, a more gradual recovery in tourism would only lead to 0.2–0.3 higher GDP growth in the first two years with negligible spillovers to other sectors of the economy.

14. While the results presented in this study are close to earlier estimates, they should be interpreted with a great caution. Absent of a structural model behind it, the VAR approach provides a rough aggregate estimate of the impact, and the confidence interval around the estimated are large due to relative short data series. In addition to that, historical estimates of the linkages capture the capacity building effect. Given significant spare capacity after the shock, recovery in demand will unlikely to stimulate additional capital spending. Finally, the assessment mentioned above does not take into account counter policy measures, including withdrawal of fiscal stimulus introduced to mitigate the fall in GDP during shock.

In theory, tourism can be considered as a ‘luxury’ good, with income elasticity of demand close to or above unity. This assumption if often confirmed in the empirical studies (see for example Tsounta (2008) and TRA (2011)). For Turkey the analysis of demand factors had mixed results, potentially because tourists considering Turkey as a low-cost destination may go to other countries as they become richer.

Sources: The World Tourism Organization (UNWTO) and the World Travel & Tourism Council (WTTC). Tourism Economics, 2012 ‘The Impact of Visa Facilitation on Job Creation in the G20 Economies’, 4th T20 Ministers’ Meeting, Mexico. Two other countries mentioned by the study as having very open visa policies were Mexico and Australia.

In 2015, the Global Terrorism Index deteriorated by six per cent in 2015. Apart from Turkey, significant deterioration in GTI scores were registered in France, Saudi Arabia, Kuwait, Tunisia, and Burundi. See Institute for Economics and Peace (2016).

See among others the World Travel and Tourism Council (2015), Ahlfeld et al (2015) for the analysis of case studies, Neumayer (2006) for the effect of violence and political uncertainty more general in a cross-country panel.

Sources: CBRT (workers registered in the tourism industry); the World Travel and Tourism Council (coverage of the travel and tourism sector includes hotels, travel agencies, restaurants, airlines and other passenger transport, as well as the activities of the restaurant and leisure industries directly supported by tourists).

Among others, Tase (2016) used time series approach to analyze the link between the sectoral composition and the business cycle for the United States. IMF (2011) use VAR models to explore the role of agriculture and its relation to other sectors in Paraguay. Canova and Dallari (2013) use panel Bayesian VAR models to study the role of tourism on the international transmission of business cycles.

The real GVA series are taken from the data available prior to the release of 2016:Q3 GDP estimates, and therefore do not account for the methodological changes announce in December 2016.

CBRT (July 2016) estimated that in 2016 the total effect of a 30 percent drop in tourism revenues on growth was about -1.1 pp. Similar magnitudes of the impact on GDP per 10pp change in tourist arrivals were estimated based on the CGE models (Akkemik and Senerdem (2014) and Gul (2015)). It is worth noting, however, that the results of the CGE models cannot be directly compared as they can only be treated as relevant for the longer term.

Tourist Expenses by Types of Expenditure, 2015 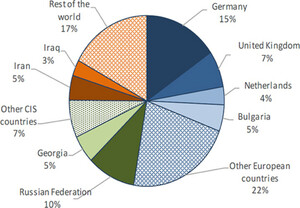 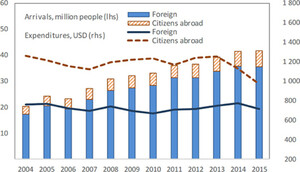 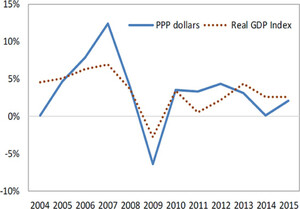 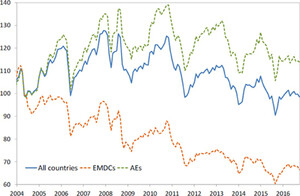 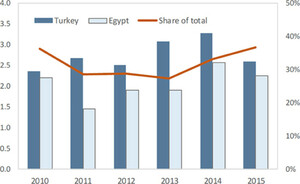 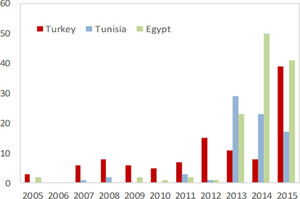 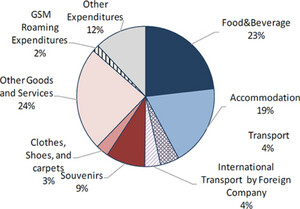 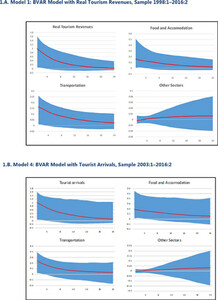 Powered by PubFactory
Close
Table A.3.