The Challenges of Population Aging for Pensions in Uruguay1

1. Uruguay’s population is rapidly aging. Uruguay has one the highest proportions of elderly citizens in Latin America. Fourteen percent of the population is currently over 64 and this share is expected to increase to about 22 percent by 2050 and 31 percent by 2100, as fertility continues to decline and life expectancy increases. The median age is projected to rise from 35 currently to 42 in 2050 and 49 in 2100. According to UN projections, Uruguay’s population would start declining as soon as in 2055.

2. These demographic changes will directly affect long term fiscal sustainability by putting pressure on the pension system. The old-age dependency ratio, defined as the population aged 60 and above over the working-age population, is expected to grow from less than 33 percent in 2015 to 50 percent in 2050, and close to 77 percent in 2100. This increase will put pressure on the financial equilibrium of the pension system whose financing mostly relies on contributions or taxes paid by workers, while expenditures benefit elderly people.

3. The Uruguayan pension system has evolved from a “pure” pay-as-you-go system to a mixed system. The Uruguayan pension system is one of the oldest in Latin America. The very first pension system, for veterans of the independence war and widows, was created in 1829. The early, fragmented, pension systems were progressively unified and extended to cover all public and private sector employees. Since 1989, the Constitution provides that pension benefits shall be indexed to the median wage. In 1996, the system was reorganized into a mixed system including a pay-as-you-go (PAYG), defined-benefit component and an individually-funded, defined-contribution component (Law 16.713). The PAYG pillar is administered by the Banco de Previsión Social (BPS) for most contributors. In addition, there exist five separate systems for banking sector employees, university professionals, public notaries, the military and the police. The second pillar is managed by private pension fund administrators (AFAPs) under the supervision of the central bank. Above a certain income threshold, workers can voluntary contribute additional savings. The system also includes a noncontributory elderly and disability pension program.

4. Workers’ contributions only partially finance the system. The first pillar of the system (PAYG) is funded by a combination of employers and workers’ contributions, earmarked taxes, and transfers from the government to cover recurring funding gaps. Uruguay’s active coverage (measured by the ratio of contributors to the economically active population) at 77 percent, is very high among Latin American countries and has been rising over the past ten years as informal employment has declined.

Law 19.162, passed in 2014, allowed certain BPS affiliates in the first and second bracket to revoke their participation in the individually funded system, in which case the AFAPs have to transfer the accumulated contributions to the BPS. The special regimes for banking sector employees, university professionals, public notaries, the military and the police have their own funding rules.

6. Benefits include contributory benefits and non-contributory solidarity pensions. Pension benefits are paid by the BPS for the PAYG pillar, by the insurance company (Banco de Seguros del Estado) for the defined contribution pillar (out of the accumulated individual saving transferred by the AFAPs), and by the respective special funds for the five special regimes:

7. Passive coverage is very high, in absolute terms and also relative to other countries in the region. The proportion of people aged 65 and above who receive a pension exceeds 90 percent (BPS only) which places Uruguay in the top two countries in the region for passive coverage. About 7 percent of the population above 65 is covered by the noncontributory system (pillar 0).

8. Public pension expenditures as a share of GDP are higher in Uruguay than in other emerging and Latin American countries in 2015. Expenditures for the solidarity pillar and PAYG pillar represented respectively around 0.5 and 7.4 percent of GDP in 2015, while expenditures for the five special regimes together are estimated around 3.1 percent of GDP. In comparison, average public pension spending was equal to 3.6 percent of GDP in the Latin American region and 4.5 percent in all emerging economies.3 The higher old-age dependency ratio and passive coverage can explain this difference.

11. There can be a trade-off between fiscal sustainability and adequacy. The 1996 reform introducing an individually funded component accounts for the limited spending increase projected in the next 50 years. However, this may come at the cost of lower pension benefits, if for instance, contributions to the defined-contribution pillar are insufficient or rates of return too low.

12. To assess the risk of inadequate pensions, we project theoretical replacement rates until 2100. The projection is done separately for men and women since life expectancy varies by gender. Individuals are assumed to start working at age 20 and to retire at age 60. The baseline projection conservatively assumes a contribution density of 75 percent, that is working-age individuals are assumed to contribute three years out of four to the pension system (and to be unemployed, outside the labor force or to work outside the formal sector during the fourth year). The model assumes that workers have perfect foresight and optimally choose whether to contribute or not to the defined-contribution pillar when they have the choice (wage-earners in brackets 1 and 2 in Figure 2). The projection is done in five steps:

15. Future reforms will need to address the growing fiscal expenditures required to maintain constant replacement rates. The above projected theoretical replacement rates for Uruguay are well below past replacement rates, that prevailed in the old single PAYG system. In 2010, the OECD estimated the median net replacement rate at 66.3 percent. For contributors to the defined-contribution pillar, the adequacy of future pension benefits will increasingly depend on the rate of return on individual pension savings accounts (sensitivity analysis not presented).

16. However, overall contribution rates are high compared to other countries in the region and do not leave much scope for an increase. The total contribution rate, combining both workers and employers’ contribution, reaches 22.5 percent in Uruguay against 13.6 percent on average in other Latin American countries (Table 2).

Uruguay: Structure of the Pension System

Uruguay: Structure of the Pension System

18. A similar improvement in fiscal sustainability could be obtained through a change in the benefit indexation formula, from indexation to the median wage to indexation to inflation. Indexing pension benefits on inflation would also reduce the risks borne by insurance companies (currently solely the Banco de Seguros del Estado) which pay out pension annuities for the defined-contribution pillar out of accumulated savings whose nominal rate of return depends on price inflation. Such a change would, however, require a constitutional reform and would not help raise replacement rates.

19. Addressing the deficits of some of the special regimes is also crucial for fiscal sustainability. The estimations presented in this paper did not take special regimes into account. Some of those regimes are currently running sizable deficits (e.g. military pension regime) which, if left unaddressed, would significantly add to projected fiscal challenges.

This subsidy is offered considering that the PAYG system is partly government funded.

Law 16.173 creating the mixed system allowed BPS affiliates older than 40 years on April 1st, 1996, to remain in the old “transition” system. In contrast to pensions in the mixed system, pensions paid by BPS in the transition regime are not capped (since workers contribute based on 100 percent of their wages), so pension expenditures are higher.

Projections for both contributory and non-contributory systems until 2060 are from BPS (2015). They are extended up to 2100 using the following pension identity (Clements and others, 2013), assuming constant elderly coverage, employment and replacement ratios, and compensation share of GDP:

The present discounted value of spending increases gives a sense of how much these increases could add to public debt in the absence of reform. In contrast to the present discounted value of future deficits, it does not require any explicit assumption about the path for revenues, which facilitates cross-country comparisons. The computation assumes an interest-growth differential of 1 percent, as in Clements and others (2015).

6
The value of the annuity payment for an individual retiring at age j at time t is given by:

where Vt-1 denotes the value of the individual retirement account at time t-1, c is the annuity cost (administrative cost), rt is the nominal rate of return, indext is the rate of pension indexation/revaluation (median wage growth), and lej is the life expectancy at age j.

Uruguay: Age-Distribution of the Population 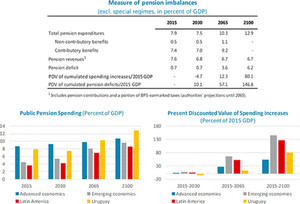 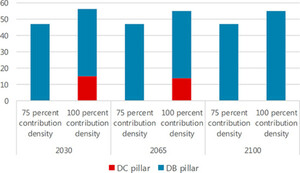