This paper looks at the stability of Uruguayan banking sector. After a brief description of the structure of the sector and its potential vulnerabilities, it presents the results of solvency and liquidity stress tests covering all public and private banks. These tests show banks have enough capital to withstand adverse credit, interest rate, sovereign, and exchange rate shocks. Banks’ structurally low profitability, however, constrains their ability to absorb more severe shocks.

1. The Uruguayan banking sector is relatively small. The total assets of the 11 banks considered in this paper (2 public banks and 9 private, foreign-owned, banks) represent 80 percent of GDP. Credit is particularly low. Bank credit to the non-financial sector represents around 32 percent of GDP. This is well below the level observed in peer income-level countries and in other countries in the region. Credit to the non-financial sector also represents less than 41 percent of total banking assets. The average, however, masks significant variations across banks, with loans representing more than 88 percent of BHU’s assets, but only 10 percent of the assets of the Uruguayan affiliate of Banco de la Nación Argentina.

4. Banking sector vulnerabilities have increased with the growth slowdown but remain limited. The spidergram (Figure 3) plots the ranking of the z-score of six variables capturing different dimensions of banking sector soundness: capitalization level (assessed through the capital adequacy ratio), asset quality (ratio of non-performing loans to total loans), profitability (return on assets), liquidity (ratio of liquid assets to short-term liabilities), FX risk (share of foreign currency loans to the non-tradable sector), and credit growth prospects (bank credit growth). The further the value of each variable in a given period is from its historical mean, the higher the z-score and the numerical ranking assigned to it (see Cervantes and others, 2014). Based on 2016Q2 data, the chart points to increased vulnerabilities in terms of asset quality and profitability. The NPL ratio has been historically very low in Uruguay and has doubled over the past two years. This explains the ranking of 10 associated with that variable, even if the current level does not, at this stage, seem a cause for significant concern, and provisions for loan losses remain high. Similarly, the drop in the return on assets over the last year has pushed the numerical ranking for that variable to 7, a value typically indicative of medium-high risk.

5. While the sector’s capital adequacy ratio has stabilized after several years of decline, banks’ structurally low profitability constrains their future loss-absorption capacity. Because of slowing loan growth, the system-wide CAR (14.7 percent at end-June 2016, including BHU) has slightly increased over the past year, ending several years of decline. Public banks continue to exhibit higher capitalization levels than their private counterparts. At the same time, the still low level of dollar interest rates combined with the slowdown in lending weighs on the profitability of banks’ foreign exchange activity, given that banks keep their excess dollar assets in the form of deposits or invest them in sovereign (domestic or foreign) securities. The segmentation of the sector and the lack of competition on the peso deposit and credit markets—reflected by the large market share of the two public banks—are also sources of inefficiencies.

6. Banks can withstand a range of adverse credit, interest rate, sovereign risk and exchange rate shocks. The stress tests consider the impact of different types of shocks on capital and risk-weighted assets in a static way. In particular, they do not include any feedback effect of the shocks on credit growth. The tests were performed on individual bank data at end-June 2016.

7. The low level of credit limits the effect of credit shocks. A proportional increase in NPLs across all sectors implies a reduction in the system-wide capital-adequacy ratio (CAR) by 0.7 percent. A more severe shock affecting export-oriented sectors results in an even smaller deterioration of 0.4 percent. Reverse stress testing indicates that NPLs would have to rise by 19 to 22 percent of currently performing loans for the CAR of either a third of the banks or banks representing a third of total assets to fall below the regulatory minimum of 8 percent—an extreme event.

8. Maturity mismatches imply a significant effect of a rise in interest rates on net interest income. The impact on net interest income is sizable, reducing the CAR of one bank below the regulatory threshold.5 The repricing effect is also significant, although the impact on the CAR is mitigated by a decrease in risk-weighted assets as FX-denominated bonds make up 92 percent of banks’ bond portfolio, or 8 percent of total assets (peso-denominated sovereign bonds are zero risk-weighted). Taking both effects into account, two banks, representing close to 10 percent the system’s assets and 7 percent of its capital, would register CARs below the regulatory minimum.

9. A sovereign risk premium shock would mostly affect public banks as private banks’ holdings of public debt securities is on average small. The aggregate CAR would drop by 1.6 percent, but by 3.5 percent for public banks only.

10. Given banks’ aggregate long position in foreign exchange, a depreciation of the peso potentially creates large direct gains. Those, however, do not translate into higher CARs as the risk-weighted assets increase more than capital. In addition, a large depreciation implies an increase in NPLs to non-hedged borrowers. Overall the system-wide CAR decreases moderately, by 1.4 percent, with no bank falling under 8 percent.

11. A combined credit risk, interest rate, sovereign risk and FX risk shock could have larger effects, that could be cushioned by countercyclical buffers.6 The system-wide CAR would remain close to 9 percent with however some large variations across banks. Five banks, representing half of the capital of the whole system, would register CARs (not including countercyclical buffers) below the 8 percent regulatory minimum. Countercyclical buffers could be used to support CARs but would be insufficient to lift all of them above 8 percent. Yet, the combined shock would not trigger any bank failure even if balance sheet adjustments would be required.

12. Contagion effects are limited by the small interbank exposures. The interbank exposure analysis in Figure 4 uses interbank exposure data on both the asset and liability sides to determine potential second round effects of the previously described macro-shocks.7 The results show very low contagion and vulnerability levels, as banks mostly fund themselves through deposits and interbank exposures represent less than one percent of total banking assets at end-June 2016.

13. Deposits represent more than 85 percent of banks’ liabilities. Two-thirds of those deposits are in foreign currency and redeemable at demand. Public banks have a higher share of peso deposits in their total liabilities than private banks (24 percent versus 14 percent), in particular because BHU hardly holds any foreign currency deposit. Given banks’ reliance on deposit funding and low level of credit, the aggregate FX loans-to-FX deposit ratio is relatively low, around one-third. However, the peso loans-to peso deposits ratio is close to 100 percent. Bank liquidity is further supported by high reserve requirements (increased to 28 percent of both peso and dollar deposits on April 1st). Liquid assets cover around 35 percent of demand deposits, with an even higher ratio for deposits in foreign currency.

15. Banks in Uruguay appear sufficiently solid to withstand adverse solvency shocks. This paper considered simple stress tests, looking at the static effects on banks’ CAR of credit, interest rate, sovereign, and exchange rate shocks, separately and in a combined way. While several banks would see their capital-adequacy ratio fall under the regulatory minimum in case of combined shocks, requiring balance sheet adjustments, the system-wide CAR would remain above 9 percent after including countercyclical capital buffers. Contagion effects would be limited by the very small interbank exposures. The implementation of Basel III requirements in 2017 will increase the capital of the five systematically important banks, thereby enhancing their resilience to shocks further.

16. The liquidity of the system is high. The funding structure of banks and their low level of credit result in a high level of liquidity, supported by high reserve requirements. Banks’ liquidity is higher in dollar than in peso, consistent with the higher dollarization of deposits than loans.

17. The declining profitability of banks constrains their future loss absorption capacity. The low profitability likely reflects high labor costs, a lack of efficiency in some banks, and a conservative business model. As the 2014 financial inclusion law expands the potential client base for private banks, these could be encouraged to compete more aggressively in the peso lending market, without jeopardizing their capitalization levels.

A 25 percent provisioning rate on new NPLs is assumed. The effect of the shock on risk-weighted assets is assumed to be of the same magnitude as the effect on capital.

The test considers the cumulative gap at a 12-month horizon. It assumes the increase in interest rate is passed through symmetrically to deposit and lending rates.

This means that 6 percent of FX loans currently performing would become non-performing following the assumed 30 percent depreciation shock. The provisioning rate on new NPLs is set at 25 percent.

This effect is mechanic given the maturity gap between assets and liabilities and the assumed symmetric pass-through to deposit and lending rates in the model. In reality, banks expect a positive effect on their income from a rise in interest rates as the pass-through to deposit rates is projected to be much smaller than the increase in lending rates.

The exercise assumes a loss given default of 100 percent following a credit shock and that 35 percent of the funding lost as a result of a bank failure is not replaceable, with a funding-shortfall induced loss factor of 1.

Uruguay: Dollarization of the Credit Market

Uruguay: Structure of the Banking Sector 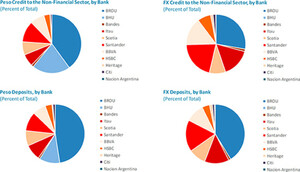 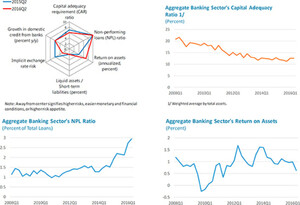 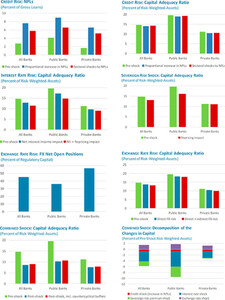 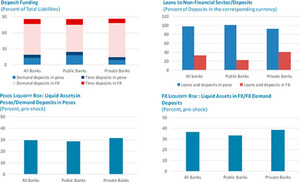