Offshore banking is an important segment that accounts for a sizable portion of Panama’s international banking center (CBI). As offshore financial centers (OFC) have come under heightened scrutiny due to international initiatives to strengthen financial integrity, improve transparency and fight tax evasion, this analysis looks at the contribution of Panama’s offshore banking sector (OBS) to the local economy. It identifies three main, quantifiable channels through which offshore banking affects Panama’s economy: employment generation, local expenditure, and public revenues. In particular, OBS accounts for about 3.5 percent of total employment in the banking sector, 0.1 percent of overall local expenditure, and roughly 0.1 percent of public revenues. While these contributions are not insignificant for the local economy, they are relatively less important compared to the impact of the OFCs in the Caribbean island economies.

1. The offshore banking sector is an important segment of Panama’s international banking center. As of December 2015, Panama’s CBI consists of 92 banks, 51 of which have general banking license (including the two state-owned banks Banco Nacional de Panamá and Caja de Ahorros), 27 have international license, and 14 are representative offices of foreign banks. The general-license banks, also referred to as the national banking system (NBS) or the “onshore” sector, can conduct all types of banking operations in Panama and abroad. The international-license banks, also referred to as the “offshore” sector, are not allowed to conduct domestic banking operations and can only collect deposits from non-residents and allocate credits abroad. The resident representative offices are only allowed to promote the business activities of their foreign-owned parent banks, but cannot have any banking operations.

2. Recent initiatives to strengthen financial integrity, improve transparency, and fight tax evasion have raised the operating costs of many financial centers. Heightened scrutiny by international and national policy regulators and multilateral initiatives (G-20, FATF, Global Forum on Tax Transparency, FSB, and others) have raised the costs of complying with the international standards. In this context, the authorities in countries with significant offshore financial sectors have been urgently requested to strengthen their supervisory and regulatory frameworks and to intensify their efforts aimed at ensuring adherence to information-sharing standards.

3. In light of arguments that the costs of having an offshore financial sector may have increased recently, this analysis aims to assess the contribution of Panama’s OBS to the local economy. It takes stock of studies in the literature that aim to assess the economic impact of offshore financial centers, and gives an overview of the place and recent developments in Panama’s OBS. In turn, the analysis documents three major direct channels through which offshore banks contribute to Panama’s economy (employment generation, local expenditure, and public revenues) and provides some concluding remarks, putting this evidence in a cross-country context.

4. The literature suggests that economic contributions of OFCs vary widely across jurisdictions. The empirical studies focus on government revenues derived from taxes, license fees, and renewal charges for licensed entities, direct employment generation, and benefits through positive spillovers to other sectors of the local economy, including tourism and infrastructure upgrades. For instance, in their study of the English-speaking Caribbean islands, Suss, Williams, and Mendis (2002) find that direct fiscal revenues related to OFCs in year 2000 range from 0.2 percent of GDP or less than 1 percent of government revenue in The Bahamas to 13.1 percent of GDP or almost 55 percent of government revenue in the British Virgin Islands. The fiscal effect is reported to be around 1 percent of GDP in most other English-speaking Caribbean islands, with the exception of the Cayman Islands, where the OFC contributes over 4 percent of GDP in public revenues or about 15 percent of government income. Gonzáles-Mendoza et al. (2013) find that direct fiscal revenues from OFCs in 2008 accounted for a small fraction of total government revenues in The Bahamas (0.05 percent) and Antigua and Barbuda (0.2 percent), though they constitute a larger fraction in St. Kits and Nevis (2.1 percent) and especially in Barbados, where the OFC contributes about 11 percent of total public revenue.

5. Offshore centers are documented to have contributed considerably to economic activity and employment in the Caribbean. Suss, Williams, and Mendis (2002) estimate that the OFC in The Bahamas contributed 2.5 percent of GDP in local expenditure, and directly employed almost 1,000 workers at the end of 2000. Using estimates based on revenue flows, employment, and services, Gonzáles-Mendoza et al. (2013) find that the OFCs contributed about 1 percent of domestic GDP in Antigua and Barbuda, 7.8 percent in Barbados, and 7.4-9.2 percent of GDP in The Bahamas. Britton and Sacks (2007) report that offshore banking in The Bahamas directly accounts for about 3.5 percent of GDP (almost 40 percent of banking sector’s total value added) and about 1,000 jobs or over a quarter of total banking sector employment. Moreover, they find that value added per employee in the OFC has been nearly twice as large as in the onshore part of the banking sector. In a related vein, using data for 15 Caribbean island economies, Butkiewicz and Gordon (2013) find that the presence of an OFC had a sizable and positive effect on national income growth.

7. The offshore segment has evolved broadly in line with the rest of the banking sector. The banking center has grown at roughly the same rate as Panama’s GDP over the last decade, with total assets oscillating around 2.5 times the size of the economy. The global financial crisis had a small impact limited to a short stagnation episode in 2009, and the banking center has doubled in size since 2008. Offshore banks’ assets followed a broadly similar trend with the CBI, though their share in GDP registered a slight decline from close to 50 percent of GDP in 2010 to about 40 percent of GDP in the last year.

9. Offshore banks are monitored by both home and host supervisors. Formal regulation and supervision in their home countries is a pre-condition for banks to obtain international bank license in Panama. Home supervisors are also conducting regular on-site inspections of the offshore banks in Panama. In addition, the Superintendency of Banks of Panama (SBP) as their host supervisor, monitors the offshore banks’ operations on a regular basis, and carries out on-site inspections at least once every 18 months.

10. Offshore banks enjoy favorable tax conditions. International-license banks are exempted from profit taxes in Panama, as they do not conduct any domestic banking operations, which represents an important incentive for basing their international banking activities in the country. They are, nonetheless, subject to business license, municipal, property, complementary, banking, and fixed annual taxes.

D. Effects on the Real Economy

11. The offshore banking sector affects the real economy through various channels. These banks contribute to generation of jobs in the domestic economy. In addition, improved training of the local workforce to match the requirements of the international-license banks can lead to higher human capital. The offshore banks’ presence affects the demand for housing and accommodation, as well as the real estate market2, may help support the diffusion of modern technology and knowhow, and can even facilitate FDI inflows in the local economy. While some of these channels are difficult to quantify, the focus here is on three direct quantifiable effects: employment, local expenditure, and government revenues.

12. OBS accounts for a stable share of total banking center employment. Over recent years, offshore banks have directly accounted for 800-900 jobs in the Panamanian economy (Chart 4). However, the offshore banking segment has been significantly less labor-intensive compared to the onshore part, given its orientation to international operations. While the offshore banks account for a fifth of the CBI assets, they only employ about 3.5 percent of CBI’s workforce.

13. Offshore banks directly contribute to domestic demand through administrative and general expenditures. In total, OBS accounted for about $55 million in local expenditure in 2015, or roughly 0.1 percent of GDP (Chart 5). While the nominal value of wages, administrative, and general expenses has almost doubled from 2010 to 2015, its share remained around 0.1 percent of the domestic economy.

14. OBS contributed to public revenues through taxes, bank inspection fees, and bank regulation and supervision rates. While offshore banks are exempted from profit taxes, they pay municipal, business license, property, banking, complementary, and fixed rate taxes, which typically represent over half of all public revenues collected from OBS. The remaining revenues refer to bank inspection fees and regulation and supervision rates that offshore banks pay directly to the SBP. Overall, these payments amounted to about $6 million in 2015, or roughly 0.1 percent of total government revenues (Chart 6).

15. Offshore banking accounts for a sizable portion of Panama’s banking center. While direct financial linkages to the rest of the financial system are very limited, the offshore banking segment contributes to the local economy through employment, expenditures, and public revenues. Namely, this sector accounted for about 3.5 percent of total employment in the banking center, 0.1 percent of overall local expenditure, and roughly 0.1 percent of public revenues in 2015. Nonetheless, the economic contribution of Panama’s OBS is relatively less important compared to the impact of the offshore financial centers in the smaller Caribbean island economies, where the offshore banking segment accounts for up to a tenth of the local economy and even close to half of all public revenues. In this context, it is important to mention two notes of caution. The analysis here is limited to offshore banking and does not cover the rest of the offshore financial services industry, which may have a more significant overall impact on Panama’s economy3. Finally, the analysis does not incorporate the indirect effects related to spillovers from offshore banking to FDI inflows, tourism, and infrastructure investments, among others.

The rest of the offshore sector includes providers of legal and various ancillary services.

Employment in the Offshore Banking Sector 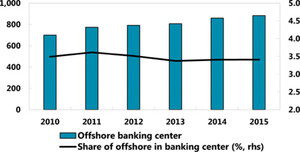 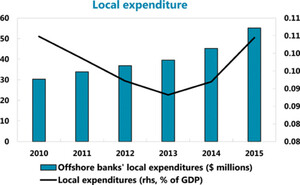 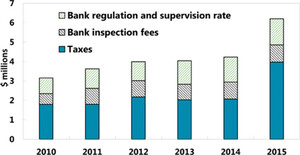