Madagascar is a fragile country striving to recover from an extended political crisis and international isolation from 2009 to 2013, during which key social and developmental indicators deteriorated. Low revenue collection, substantial low-priority public spending, and governance problems are holding back recovery. Nevertheless, broadly satisfactory performance under the six-month staff monitored program that ended in March 2016 is a sign of improving implementation capacity.

Madagascar is a fragile country striving to recover from an extended political crisis and international isolation from 2009 to 2013, during which key social and developmental indicators deteriorated. Low revenue collection, substantial low-priority public spending, and governance problems are holding back recovery. Nevertheless, broadly satisfactory performance under the six-month staff monitored program that ended in March 2016 is a sign of improving implementation capacity.

On July 27, 2016 the Executive Board of the International Monetary Fund (IMF) approved the equivalent of SDR 220 million (about US$304.7 million, or 180 percent of current quota) under a 40-month Extended Credit Facility (ECF) arrangement for Madagascar, to help reinforce macroeconomic stability and boost sustainable and inclusive growth.

Following the Board’s decision, SDR 31.428 million (about US$43.5 million) is available for immediate disbursement; the remaining amount will be available in phases over the duration of the program, subject to semi-annual reviews.

The Executive Board was also informed about the Managing Director’s approval of the first and final review under the six-month Staff-Monitored Program (SMP) covering the period from September 2015 up to the end of March 2016. During this time, the country built a satisfactory track record of sustained reforms, with progress in most areas.

“The new arrangement for Madagascar under the Extended Credit Facility aims to reinforce macroeconomic stability and promote sustainable and inclusive growth. Weak revenue collections, substantial low-priority spending, and the need for strengthened economic governance all pose challenges to medium-term economic development. Against this background, rigorous and sustained reform implementation will be crucial.

“Rapid growth and sustained poverty reduction will require more investment in infrastructure and broader access to education and health care, in addition to structural reforms. It will be essential to increase tax revenue and to contain and then reduce lower-priority spending, including transfers to state-owned enterprises, such as the utility company JIRAMA. While substantial external borrowing is appropriate to finance development, debt sustainability must be preserved and the authorities should rely as much as possible on external grants and concessional financing.

“Reforms to strengthen governance are also central to the success of the economic program. Key actions include strengthening public financial management and procurement practices, increasing budget transparency, carefully managing the fiscal implications of Public Private Partnerships, and reinforcing the institutions and legal framework for combatting corruption.

“Creating a solid foundation for further financial deepening will be crucial for reinforcing economic growth and stability. This will require more frequent and deeper supervision of banks and nonbanks, establishment of a legal and operational framework for institutions in difficulty, and promotion of modern payment methods.

“The central bank has been strengthened by increased legal independence and growing international reserves. The authorities should remain vigilant about maintaining price stability, and continue to improve the operational framework for monetary policy implementation, including by establishing a well-functioning money market.”

Hampered by fragile institutions, Madagascar is striving to recover from an extended political crisis and international isolation from 2009 to 2013. During this period, key social and developmental indicators deteriorated.

The recovery that began in 2014 has so far failed to gain much momentum due to key commodity prices falling, weather-related shocks, and deep-rooted structural weaknesses. GDP growth is now estimated at 3.1 percent in 2015, which is slightly lower than in 2014 and barely higher than population growth. Inflation fell back to 6.3 percent at end-May 2016 from 7.6 percent at end-December 2015, led by lower food and fuel prices.

Budget execution was challenging in 2015. Priority spending was squeezed by underperforming revenue collections, financing difficulties, and unexpected needs for transfers to state-owned enterprises and pensions. The fiscal deficit increased to 3.3 percent of GDP. Despite international headwinds, economic conditions are expected to improve in 2016 supported by country specific factors.

Performance Under the Staff-Monitored Program (SMP)

Macroeconomic performance was broadly satisfactory under the SMP, which ran from September 2015 to end-March 2016. Macroeconomic targets were met through end-March 2016, with the exception of the ceilings on net credit to government and new external payment arrears, due to technical difficulties in making payments. Tax revenue began to improve gradually, thanks to additional measures under the program, and priority social spending targets were met. A robust accumulation of foreign exchange reserves boosted external buffers.

Progress was also achieved on the structural front, including strengthened audits and controls for revenue collections; an automatic fuel pricing mechanism to avoid any fuel subsidies; the submission to Cabinet of a revised Central Bank Act, advancing a key institutional objective for macroeconomic stability; the Cabinet approval of a National Social Protection Policy; better transparency and functioning of the foreign exchange market; and a new database to enhance debt management capacity and transparency.

The government program, supported by the ECF, aims at reinforcing macroeconomic stability and promoting sustainable and inclusive growth. The program focuses on:

For additional background information on the IMF and the Republic of Madagascar, see: www.imf.org/Madagascar 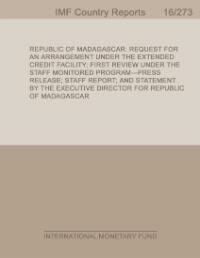